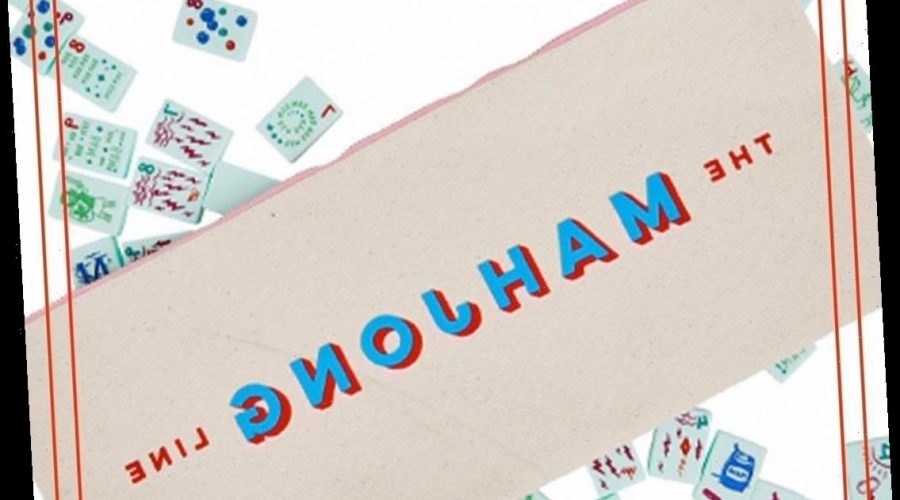 An American company selling redesigned mahjong tiles apologized on Tuesday after critics on social media accused its founders of cultural appropriation and of ignoring the game’s Chinese roots.

The Mahjong Line was founded by three Dallas women — Kate LaGere, Annie O’Grady and Bianca Watson, all of whom appear to be white. They partnered with local design agency O&H Brand Design to sell themed sets of mahjong tiles in different shades and colors, giving each set a name like “The Minimal Line” or “The Botanical Line.”

The sets are pricey, costing either $325 or $425, and feature colorful images of flowers, symbols and other geometric designs. Chinese characters, normally present on standard mahjong tiles, are largely absent from The Mahjong Line’s sets.

The “about” section of The Mahjong Line’s website — which has since changed to include an apology following the backlash — originally said that LaGere, O’Grady and Watson were inspired to give the centuries-old game a “respectful refresh” and to bring mahjong “to the stylish masses.”

Other sections of the site described the company’s version of the game as “not your mama’s mahjong” and indicated that The Mahjong Line “is for jaunty gals playing a civilized game with a wink.”

Twitter users slammed the company, which launched in November, for profiting off something it took from another culture while largely washing over the game’s Chinese origins.

In the wake of the controversy, The Mahjong Line closed comments on its Instagram page. As of Wednesday, critical comments on the company’s Facebook page were still visible.

The founders of The Mahjong Line sent a statement to HuffPost that was later published on their Instagram page.

While the statement apologizes for failing to “pay proper homage to the game’s Chinese heritage,” it also says that The Mahjong Line’s products are intended to be part of the “evolution” of American Mahjong. 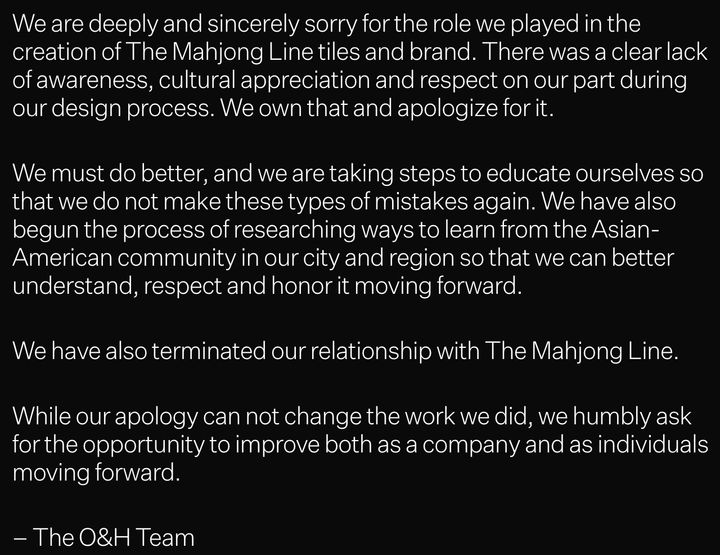 “We stand by our products and are proud to be one of the many different companies offering a wide range of tiles and accessories for the game of American mahjong,” LeGere said in an email to HuffPost. “That being said, we take full responsibility that in our quest to introduce new tiles we unintentionally recreated an experience shared by many Asian Americans of cultural erasure and are working to correct this mistake.”

LaGere added that The Mahjong Line would “continue having conversations with experts closely tied to the game’s origins to ensure its rich history and cultural significance is properly represented in our promotion and description of the game,” and said that this would be an “ongoing process.”

Speaking with BuzzFeed, LaGere said that comments on the company’s Instagram page had been disabled due to “threatening messages” and would be turned back on at a later date.

Mahjong was originally developed during China’s Qing dynasty before spreading across East Asia, with a number of distinct rulesets emerging in different regions, such as Hong Kong and Taiwan.

The game was popularized in the U.S. by businessman Joseph Park Babcock in 1920, who streamlined its rules further via the publication of his book “Babcock’s Rules for Mah-Jongg: The Fascinating Chinese Game.”

Eventually, mahjong took on a life of its own in America, especially in Chinatown communities and among Jewish American women, who were among the founders of the National Mah Jongg League in 1937.

01/07/2021 Entertainment Comments Off on Dallas Mahjong Company Apologizes For ‘Gentrifying’ A Centuries-Old Chinese Game
Recent Posts
We and our partners use cookies on this site to improve our service, perform analytics, personalize advertising, measure advertising performance, and remember website preferences.Ok