Making a new work for the Martha Graham Dance Company is a tough assignment. Any attempt to copy Graham is self-defeating, sure to pale next to the real thing elsewhere on the program. And yet the new work must have some relation to Graham, some reason to stand beside her art and at the same time stand on its own as art of today. No wonder so few of the pieces that the company has commissioned in recent years have been any good.

Now there’s an added challenge. The newest commissions come under the rubric of the two-year EVE Project commemorating the ratification of the 19th Amendment and the enfranchisement of women. Female choreographers are tasked with expressing female empowerment.

The first nights of the company’s two-week run at the Joyce Theater featured the world premiere of “Deo” by Maxine Doyle and Bobbi Jene Smith and the New York debut of “Untitled (Souvenir)” by the suddenly-in-demand Pam Tanowitz. “Deo,” striking on its own, suffers in comparison with the Graham around it. But Ms. Tanowitz has succeeded where so many have failed. Borrowing from Graham, she’s made her own magic. 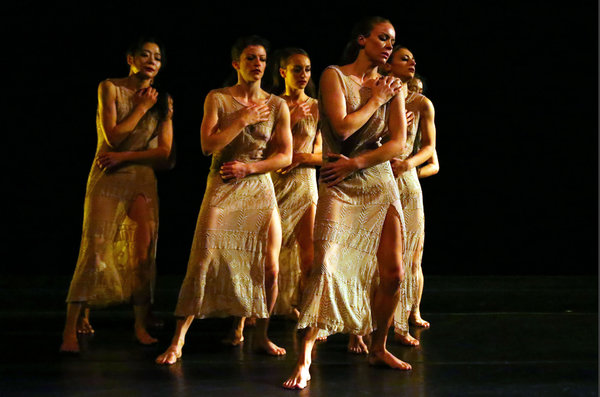 Starting in silence, “Untitled” feels at first like a clash of aesthetics. There’s something willful about how Ms. Tanowitz fractures the stage space and keeps her rhythms fragmentary, chopping up the ordered world of Graham more in the manner of the Graham alum Merce Cunningham, Ms. Tanowitz’s chief influence.

But with the start of the music, Caroline Shaw’s “Punctum” and “Valencia,” the piece builds and builds, establishing its own world, its own poetic coherence. Just as the music gives a swirling momentum to highlights of string quartet language, so the choreography makes shards of Graham gleam with new brightness and beauty. The flow is Ms. Tanowitz’s.

[Read about the making of “Deo” and “Untitled (Souvenir)”]

“Deo” is more dutiful and less original. Following Graham’s love of myth, Ms. Doyle and Ms. Smith have extracted themes of mothers, daughters, mortality and grief from the story of Demeter and Persephone. The piece, for an all-female cast, proceeds by image and blackout: a forest of women on their backs, with heads and legs floating; a crowd of women with their backs to us, writhing as if weeping; a clump of women rotating like a slow-motion tornado.

Some of the vocabulary is taken from Graham: contractions and cupped hands. But these are surface gleanings. Ms. Smith’s physicality, true to her roots in the Batsheva Dance Company, pushes Graham’s pelvic truth down into squatting thighs. The Graham women clearly enjoy the sensual abandon and Batsheva-style solos, yet you only have to watch a little of “Chronicle” — a 1936 all-female, who-needs-men Graham juggernaut also on this season’s programs — to sense the relative flimsiness of “Deo.”

Even its ensemble largeness, “Deo” also seems small next to Graham’s two-woman duet “Hérodiade” (1944). Yet the logic of Ms. Tanowitz’s “Untitled” grows more engaging if your mind has recently followed “Hérodiade” and its patterns of intense indecision, especially as strongly performed by PeiJu Chien-Pott and Natasha M. Diamond-Walker.

Not all Graham is faring so well this year. The revival of “El Penitente,” an important and difficult Graham work from 1940, is anemic. There’s too much acting in the face, rather than in the body, as becomes particularly apparent when the performers wear masks or shrouds. And “Secular Games,” one of Graham’s swinging-60s pseudo-comedies, falls short of justifying its inclusion on overstuffed, jumbled programs.

I wonder whether what the critic Clive Barnes felt about “Secular Games” at the time of its premiere — that it was witty, in a particular sense — is the same as I feel about Ms. Tanowitz now. By witty, I don’t mean funny. And it’s not only about eccentricity, though “Untitled” has many wonderful baubles that come out of nowhere and yet fit just fine.

One subtle bit of wit is the unemphatic way she gives female Graham steps to the men in her mixed-gender cast and how that cast unostentatiously splits into gendered groups near the end. A male trio, after completing a brilliantly complex section, sits to watch the women strike glorious Graham balances. Slowly, the seated men scoot along the front of the stage, still watching. And by this witty choreographic motion, Ms. Tanowitz speaks volumes about Graham and herself and the empowerment of women.

Related posts:
04/04/2019 Entertainment Comments Off on Creating for Martha Graham’s Company, Competing With the Great Mother
Recent Posts
We and our partners use cookies on this site to improve our service, perform analytics, personalize advertising, measure advertising performance, and remember website preferences.Ok