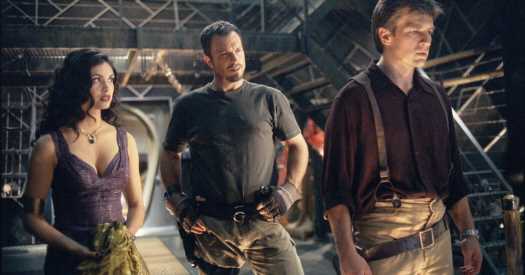 If, as a young teen, you experienced a fiery sexual awakening the first time you set eyes on Harrison Ford’s fitted pants in “Star Wars,” you should make Joss Whedon’s “Firefly” your next pandemic binge.

Created by Whedon (the brain behind “Buffy the Vampire Slayer” and “The Avengers”), “Firefly” is a quirky dramatic comedy set aboard a dilapidated spaceship, the Serenity, in an unfamiliar star cluster. Nathan Fillion — wearing a pair of Solo-like tight trousers — plays the Serenity’s captain, Malcolm Reynolds, better known as Mal.

The show initially ran for four months back in 2002 and was canceled midseason after Fox intentionally aired its episodes out of order; the network bumped Whedon’s lengthy pilot to later in the season, skipping the exposition and diving straight into the action. (Many of the series’s negative early reviews included some version of “it’s incoherent.”) Despite its rocky rollout, “Firefly” won a prime-time Emmy in 2003 (for visual effects), and a growing base of devoted fans went on to fight for its resurrection. Whedon ultimately followed the series with a flawed but toothsome film called “Serenity,” released in 2005, that hastily tied up loose ends.

These days, the series is streaming on Hulu — in the right order.

Set in the year 2517, “Firefly” follows the crew of the Serenity — a motley band of nine characters including a preacher, a mechanic, a doctor and a professional courtesan — as they zip from planet to planet, evading the star cluster’s shadowy, authoritarian central government and picking up jobs (most of them illicit) along the way.

Part of the show’s appeal is its meticulous world building. Planets close to the capital are sustained and regulated by the central authorities, while settlements out on the edge of the system exist in a state of Wild West-like lawlessness. “Firefly” is a space western, and the show plays with the details of its mashed-up setting, bouncing genre expectations off one another. In one scene, Mal and his first mate, Zoe Washburne (Gina Torres), provoke a fight in a grimy saloon. Mal is thrown through a window — standard fare in any western — but this saloon’s window is a hologram, scrambling as his body passes through it and reforming moments later.

The show remains a cult favorite, thanks largely to the charm of the Serenity’s crew. The central characters are spiky and sarcastic, but also tender and sincere. They crush on one another at a relatable velocity and fight like siblings. This makes them both lovable and realistic, and they have provided a welcome injection of vivacious humanity into my pandemic vista, which is otherwise devoid of unfamiliar life-forms.

Even if you aren’t nostalgic for sticky bars or new faces, the series still has plenty to offer. Here are three reasons to watch.

The space western is an appealing genre right now

The outer planets in “Firefly” are parched, backwater worlds that are patchworked with farmland — “terraformed,” in sci-fi parlance, to replicate the environment on Earth. Dotted with dusty frontier towns, it’s an environment that lends itself to the show’s western plot conventions, which Whedon gleefully harnesses. In one episode, the crew pulls a heist on a levitating train. In another, an exchange of illegal goods with a leathery, mistrustful matriarch ends in a gunfight on horseback. 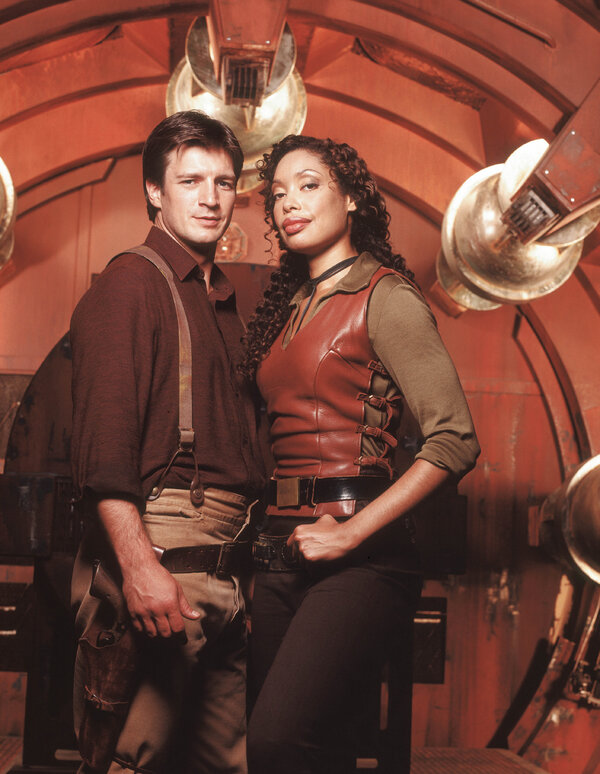 Space westerns root their drama in familiar characters and themes (outlaw brigands, frontier exploration) while offering a visual palate cleanser by way of their crisp, futuristic aesthetics — a deeply comforting combination. “Firefly” is not the first television show to attempt this merger (Gene Roddenberry called “Star Trek” a space western) nor the most recent (“The Mandalorian”) but it is, in my opinion, the funniest — which leads to my next reason.

The start of quarantine saw a flurry of articles and Reddit posts espousing sci-fi and fantasy shows as the “best” distraction during lockdown. I disagree: Many series in these genres require careful attention to comprehend their labyrinthine political intrigue, and I have no energy left for political posturing. The other interplanetary show I return to over and over is Ron Moore’s epic “Battlestar Galactica,” but that’s basically “The West Wing” set in space. I want a show right now that I can watch in the bathtub without worrying that I’ve missed a line or three, so I’m saving my next “Battlestar” binge for a time when lockdown doesn’t feel so draining.

By contrast, “Firefly” is easy to watch: It has a serialized plot (“find a job, keep flying”) and a quick-witted script. Fans of Whedon’s “Buffy the Vampire Slayer” will find the show’s comedic patter — parry, riposte — soothing and familiar.

“Firefly” also has the perfect comedy-to-action ratio. Even in serious moments, the repartee cleverly subverts dramatic clichés. In the show’s fourth episode, “Shindig,” Mal has just narrowly won a sword fight (!) against a bigoted stuffed shirt, and Mal refuses to kill him as custom demands. “Mercy is the mark of a great man,” he says, then immediately jabs the point of his rapier into the man’s stomach. “Guess I’m just a good man.” He stabs him again. “Well, I’m all right.”

Male bravado exhausts me, but on “Firefly,” the most formidable character is arguably Zoe, Serenity’s first mate. “She could kill me with her pinkie,” her husband (Alan Tudyk) remarks lovingly.

Although some parts of the show haven’t aged well (for instance, the show’s use of Chinese slang, clumsily spoken by not a single Chinese lead), “Firefly” was ahead of its time with its female characters, who were often complex and driven by surprising motivations. Zoe is reason enough to watch the show — she delights in sex with her husband and has no problem punching her antagonists in the face.

It’s worth noting that Zoe’s wardrobe hews closely to Mal’s — both wear faded red tops (in Zoe’s case, a breastplate-like leather vest), tall boots, strappy leather holsters, and, yes, fetching fitted pants. They’re clearly meant as a matched set, but the show doesn’t push them toward a romantic relationship; instead, they’re the leaders of their Western-style outlaw gang, not unlike Butch Cassidy and the Sundance Kid. For “Firefly,” it was yet another trope, refreshingly remade.