Stephen Colbert sharply criticized Sarah Huckabee Sanders, the White House press secretary, for circulating a doctored video on Thursday showing Jim Acosta of CNN refusing to give up the mic to a White House intern at a news conference.

The video was sped up, creating the illusion that Acosta had pushed the female intern roughly. This manipulated clip had originally been shared by Paul Joseph Watson, who makes conspiracy-theory videos for the far-right website Infowars.

“So that is Sanders’ reliable source? ‘CNN is fake news, and to prove it, here’s a video from a reputable news source that believes the government is putting plastic liners into juice boxes to turn our sons into gay frogs.’” — STEPHEN COLBERT

“The fact that the White House press secretary is promoting this doctored video is reprehensible, and grounds for dismissal. Or as they call it in the Trump administration, Thursday.” — STEPHEN COLBERT

‘Only the Best People’

Kimmel played video of Whitaker in a previous job, working for a company that sold hot tubs. Then he revealed a crucial fact about the company — one that, Kimmel said, should disqualify Whitaker from becoming the nation’s top law-enforcement official.

“Believe it or not, the company he was promoting turned out to be a scam and was forced to pay millions of dollars in damages after being shut down by the F.T.C. But ‘only the best people.’ We’ve got a Jacuzzi salesman as attorney general. He should ‘jacuz’ himself from the Mueller probe.” — JIMMY KIMMEL

Colbert turned his attention back to the Georgia governor’s race, which is still undecided — and could be headed for a runoff, if a few thousand uncounted ballots break hard in favor of the Democratic candidate, Stacey Abrams.

“Her opponent, Brian Kemp, is also the secretary of state of Georgia, and he purged more than one million voters from the rolls, including over 50,000 applications, predominantly from African-Americans, because their ID was not an exact match to other state records, because of something as small as a dropped hyphen in a person’s name. Wow — just like overpunctuation. Although it is refreshing to see a Republican politician who’s just a grammar Nazi.” — STEPHEN COLBERT

Wherein the comedian Bridget Everett sings for Idris Elba. Well, not really Idris Elba. And maybe not exactly singing, either. But you get the point.

James Corden did a parody of the new teen romance film “To All the Boys I’ve Loved Before,” featuring one of its star actors, Noah Centineo. 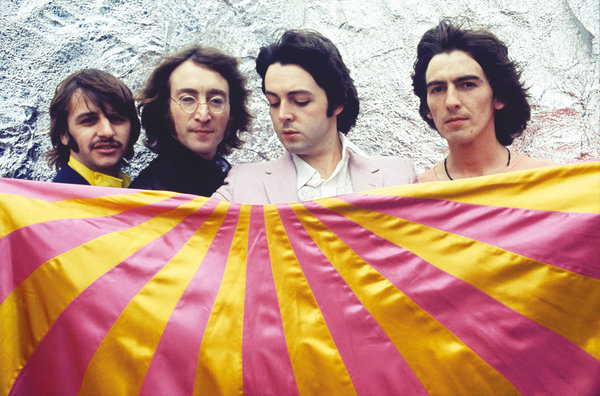 A new, 50th-anniversary reissue of the Beatles’ White Album takes a radical approach to the classic material, remixing it with little deference to the producer George Martin’s original versions.

Plus, Ideas for What to Watch Tonight: