Here she comes again. Cher, our lady of the sunshine plaids and a take-charge kind of gal, has commandeered a New York stage to preen on. And in this festive season of getting and spending, she is eager to usher nostalgic admirers down her own special memory lane, which looks a lot like Rodeo Drive.

This Cher (last name Horowitz) is the central character of the affable but limp “Clueless: The Musical,” which opened on Tuesday in a New Group production at the Pershing Square Signature Center. She is not to be confused with the title pop star of “The Cher Show,” who is embodied by three different actresses on Broadway.

But she unexpectedly shares with those versions of the everlasting singer a penchant for karaoke-style performances of songs mostly played on oldies stations. And like them, she gives the impression that, however lively and likable she may be, she is not the real thing.

Cher Horowitz, I should say, is my favorite onscreen Jane Austen heroine. (First runner-up: Jennifer Ehle’s Elizabeth Bennet in the BBC “Pride and Prejudice.”) Played by an 18-year-old Alicia Silverstone, Cher was introduced to the world in the 1995 film “Clueless,” Amy Heckerling’s inspired reimagining of the “handsome, clever and rich” title character of Austen’s “Emma” as a Los Angeles high school material girl.

It has become a truth universally acknowledged that rom-coms with young, effervescent blondes in academic settings must be turned into musicals (see: “Legally Blonde,” “Mean Girls”). Thus it was only a matter of time before “Clueless” was born again with dancing feet.

Since Ms. Heckerling did her own adaptation, which is directed by Kristin Hanggi, I had hopes that this screen-to-stage transfer would retain the charm of the original. (I never saw the television series based on the film, nor read the “Clueless” series of young adult novels.)

Yet the perverse flattening process that too often occurs when two-dimensional films are translated into the three dimensions of live theater has befallen “Clueless” as well. And don’t blame its highly competent leading lady, Dove Cameron (a Daytime Emmy winner for Disney’s “Liv and Maddie”). 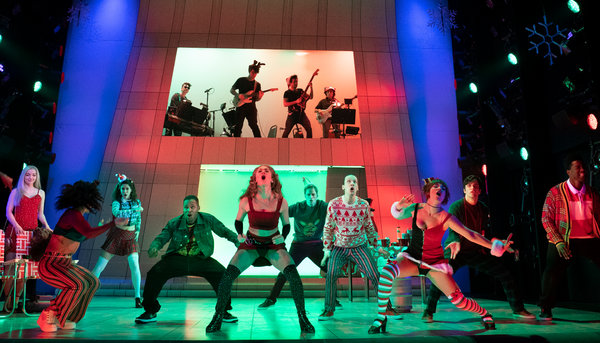 As the latest incarnation of Cher (and did I mention there’s a movie remake in the works, too?), Ms. Cameron has the poise and presence to anchor a show, and she sings and dances like a pro. Yet in stepping into the heightened, smiley landscape of musical comedy, Cher has perhaps inevitably acquired an extra, fatal degree of sparkle, and it pushes her from charming into cute.

The whole production, choreographed with a dutiful energy by Kelly Devine, suffers from a similar heightened twinkliness. It makes you appreciate how adroitly Ms. Heckerling sidestepped caricature and preciousness in her film. Like its shortsighted, matchmaking heroine — who looks for love in all the wrong places — the movie exuded a delicately balanced aura of deadpan, self-delighted innocence.

“Clueless” cultists will find many of their favorite lines have made it to the stage intact, including Cher’s immortal put-down, “As if!” (Sadly, not included is her defense of her virginity: “You see how picky I am about my shoes, and they only go on my feet.”)

But the witticisms scarcely register amid the steady trickle of repurposed pop hits from the 1980s and ’90s, which have been given new lyrics to match the plot. These include songs that were used in the movie, such as “Supermodel” and the climactic “Kids in America,” which now features the unfortunate declaration, “It’s lame to say that you like love/But now I get what people all talk of.”

Portraying the denizens of a 90210 high school and their teachers and older relatives, the cast members romp a bit aimlessly amid Beowulf Boritt’s yellow-plaid, all-purpose set, dressed in Amy Clark’s shorthand versions of designer clothes of the period. As they sing new variations on yesteryear favorites (“What if God was one of us?” becomes “What if Cher didn’t have a trust?”), they suggest a peppy “Clueless” fan club, putting on a makeshift show for themselves.

The amiable cast members include Chris Hoch as Cher’s high-powered lawyer dad and Dave Thomas Brown as her disapproving (but secretly adoring) stepbrother. The appealing Zurin Villanueva is Cher’s bestie and accomplice in binge shopping and Ephie Aardema is the lumpen new girl they try to remake in their own image.

But the character who registers most piquantly is one I scarcely remembered from the film: Travis the stoner. Embodied here by Will Connolly, Travis not only has one of the few songs that seem to make sense in context. (It’s the Crash Test Dummies’ “Mmmm Mmmm Mmmm Mmmm.”)

He also exudes a winningly out-of-it charisma that suggests a gentler version of Jeff Spicoli, the perpetually grass-glazed dude played by Sean Penn in the earlier Amy Heckerling film “Fast Times at Ridgemont High.” You know, maybe “Fast Times” might be adaptable as … But no, let’s not finish that sentence.

When you purchase a ticket for an independently reviewed play or musical through our site, we earn an affiliate commission.

Related posts:
12/12/2018 Entertainment Comments Off on ‘Clueless: The Musical’ Review: The Film’s Charm Is Replaced by Sparkle
Entertainment News