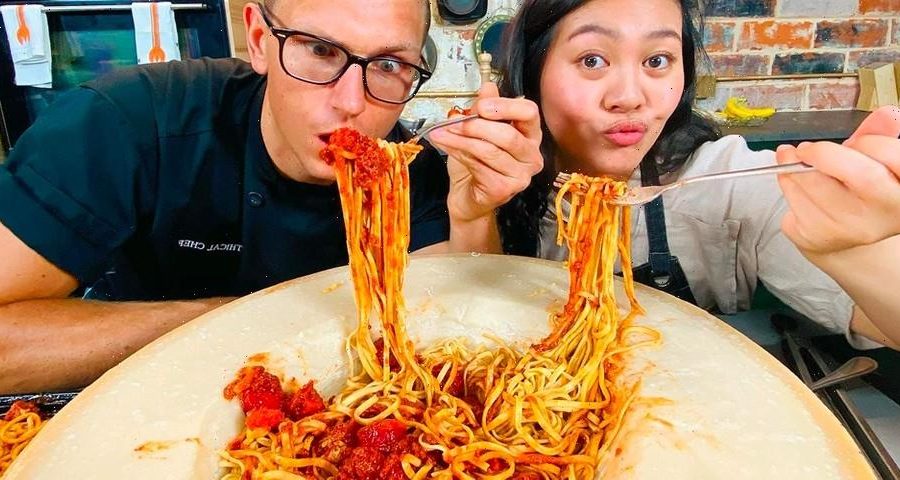 For Episode 20 of its “Fancy Fast Food” series, YouTube channel Mythical Kitchen took on the task of making a gourmet version of Jollibee beloved Jolly Spaghetti.

To start off its recreation of the irreplaceable Chicken Joy accompaniment, Josh and special guest Mindy began by breaking down a party-sized tray of the Filipino fast-food chain’s menu offering. The two dissected what makes Jolly Spaghetti special into components of noodles with a sweet sauce riddled with sausage, a pork mince and topped with melted cheese, before figuring out how to make it gourmet.

Getting into the kitchen, the two crafted a “forcemeat,” an emulsified meat mixture, from heritage pork and jamón ibérico and made banana ketchup from scratch. It is interesting to note that banana ketchup does not actually contain any tomatoes and is dyed to replicate the color of traditional ketchup. The elevated homemade banana ketchup is made from red and burro bananas with a splash of Don Papa Filipino rum, coconut vinegar, Haku Cherry Blossom Shoyu and red food coloring.

The duo then made spaghetti with Double Zero imported flour, edible gold dush and duck eggs for richness. Finally, the pasta was then tossed with Normandy Butter, covered with the sauce and red Leicester English cheese in a half wheel of Parmigiano-Reggiano.

Check out the making of the gourmet Jollibee Jolly Spaghetti which cost Mythical Kitchen $840 USD to make above.