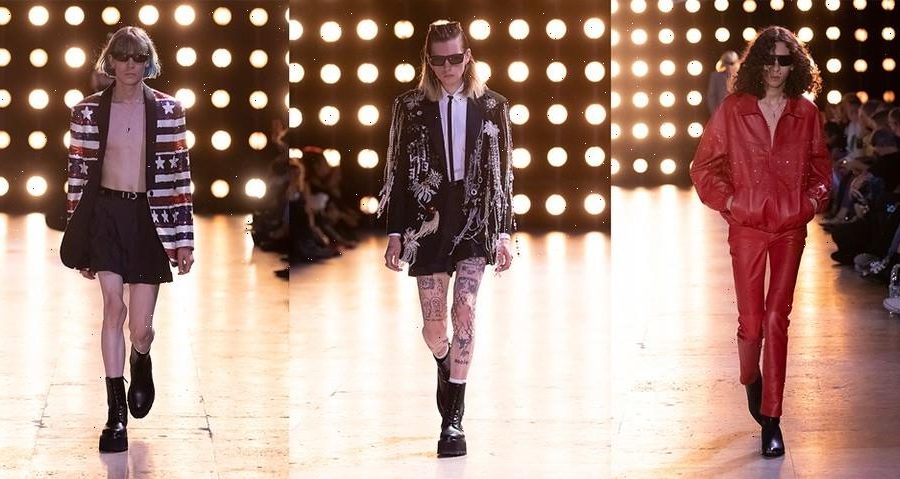 At this year’s Paris Fashion Week Men’s, Hedi Slimane made his triumphant return to Palais de Tokyo for CELINE‘s Spring/Summer 2023 presentation. Marking the 20th anniversary of the CELINE Creative, Artistic and Image Director’s inaugural show at Europe’s largest center for contemporary creation. Reflecting on his Dior Homme Fall/Winter 2002 “Reflexion” show, Slimane wanted to return to the historical Paris venue to pay tribute to the institution and its place in his personal journey.

Dubbed “DYSFUNCTIONAL BAUHAUS,” the SS23 collection that made its way down the runway was scored by the evocative sounds of a specially commissioned soundtrack from New York new-new wave band Gustaf. The sonics perfectly resonate with the contemporary yet familiar aesthetic themes explored by Hedi Slimane for the season, helping establish the defined themes that come together cohesively under the new CELINE banner.

Illuminated by a wall of car headlights, the slim looks that hit the stage perfectly expressed the still progressing design language of Slimane. Sleek tailoring, followed by striking leather looks and effortless denim was accented by fringe, sequin and heavy hardware detailing. While pointed-heeled boots and chunky military footwear underscored the collection providing a subversive touch to the clean-cut range.

Working with the estate of David Weiss, the work of the late Swiss artist made its way into the collection through prints and embroideries. The artwork of the Weiss known the world over added a sense of irony and sincerity to Slimane’s SS23 collection in his menswear reform.