This theater, for this city. New York City Center Theater celebrated its 75th anniversary on Tuesday night. That milestone neatly coincides with the annual five-week Christmas season of the Alvin Ailey American Dance Theater, the theater’s first resident modern dance company, itself celebrating an anniversary this year: its 60th.

Now as ever, the Ailey company is facing in multiple directions: reviving home repertory, acquiring works from elsewhere, commissioning new pieces. On Dec. 7, it presented the American premiere of “Kairos” (2014), by the British choreographer Wayne McGregor; and on Wednesday it presented a new “Timeless Ailey” retrospective (which is to tour 21 American cities), with excerpts from 14 works that Ailey made from 1958 to ’88.

For City Center’s anniversary on Tuesday, the company showed a triple bill of works by great American choreographers: Ailey’s own classic “Revelations” was preceded by Paul Taylor’s “Piazzolla Caldera” (1997) and Twyla Tharp’s “The Golden Section” (1983). Taylor-Tharp-Ailey: a world-conquering trio.

The Taylor “Caldera” — first acquired by the Ailey company in 2015 — is always a big hit, but I confess to having an allergy to it. I don’t enjoy its sexed-up treatment of tango, with women flaunting their underwear and dancers of both sexes steamily stroking their thighs. On Tuesday, though, I was struck by Taylor’s sheer brilliance in construction. He usually combines men and women in uneven numbers, in continual suspense; and his mastery of changing geometries is another way in which he keeps surprising you.

He was, like most of his generation, reluctant to present same-sex couples; but here he does, as if acknowledging the claim that tango began as a same-sex genre in the brothels of Buenos Aires. And he happily departs from tango vocabulary on occasion: There’s a thunderous sequence in which the dancers — in two concentric circles, one moving clockwise, the other counterclockwise — do fabulously weighted but fast jumps. Some of the Ailey dancers could probably dance this as guests with the Taylor troupe: They have the combination of rich texture and speed.

“The Golden Section” was originally the finale of Ms. Tharp’s full-length creation “The Catherine Wheel” (1980), to a superb commissioned score by David Byrne. The earlier sections of that work — filmed for TV in 1982 — were an astonishingly dark narrative in which a nuclear family showed all the frustrated, negative, often hostile energies of an implosive society, a feminist demonstration of everything that’s misdirected about modern American life. When “The Golden Section” arrived, it came simply as an alternative world, a sustained, explosive outpouring of human energies flowing in entirely positive ways. 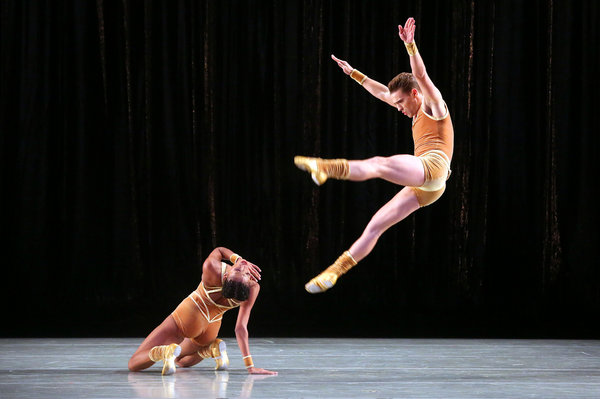 The dancers of “The Golden Section” are heroic but not unreal. Their vocabulary, a truly Tharpian synthesis, includes disco routines and jogging as well as the jumps and turns of ballet and shimmies. I love its frequent use of peripheral space, with dancers jumping or being thrown in and out of the wings as if this stage realm were just an interrupted view of something far larger. And there are marvelous moments of sheer calm emptiness, with the stage unoccupied in between the dance torrents.

Gender is and isn’t an issue: There are male sections, female sections, but also passages when women support men, exuberantly. The Byrne score, taped, is as wonderful as the choreography: Its overlapping dance rhythms and occasional use of celestial high notes are part of the same multilevel view of human potential.

The “Timeless Ailey” program shows just how many different kinds of dance Ailey could make, and how well. Even though “Night Creature” (1974, to Duke Ellington) is an old friend, it always takes me by surprise when it introduces Cuban hip motion — a joy, since the Ailey dancers are masters in the powerfully lateral use of the pelvis, now moving in figures-of-eight, now in snakier undulations. The sheer lyrical bliss of “The Lark Ascending” (1972, to Vaughan Williams) is another unlooked-for feat. As you’d hope, the Ailey dancers look wholly at home in every part.

The more I hear Max Richter’s music and his rearrangements of music by other people, the more all of it sounds to me like Muzak — pop atmospherics. Mr. McGregor’s “Kairos” is set to some of Mr. Richter’s version of Vivaldi’s “The Four Seasons”; I wonder why.

Mr. McGregor is one of the world’s most in-demand choreographers. His vocabulary combines ballet, modern and various aspects of modern social dance in a clever fusion; his structures, like those of “The Catherine Wheel,” suggest a positively alternative society. In very few cases, this succeeds. But I seldom find Mr. McGregor uses music to good effect. “Kairos,” made for Ballett Zürich (with a greater proportion of strict ballet vocabulary than most of his works), is blessedly free of his fondness for head-jutting movements and beyond-180-degree hyperextension. Nonetheless, it’s relentlessly large-scale: Small steps are delivered like emphatic statements, while most moves are high and big.

All three of these Ailey programs ended with “Revelations.” This is always hugely popular; the dancers know how to put everything across. Akua Nona Parker, perfectly partnered by Michael Jackson Jr., brings a beautifully vulnerable purity to “Fix Me, Jesus.” But most of the cast look as if they’ve been performing it too often to the same taped version of the music. Clifton Brown, a strong technician of long experience, dances “I Wanna Be Ready” with a knowing overlay of artfulness; Vernard J. Gilmore, one of the company’s most appealing long-term performers, occasionally lip-syncs in the “Rocka My Soul” finale. Even so, Ailey’s mastery of multiple styles — “Revelations” is not one kind of dance theater but several — keeps this classic alive.