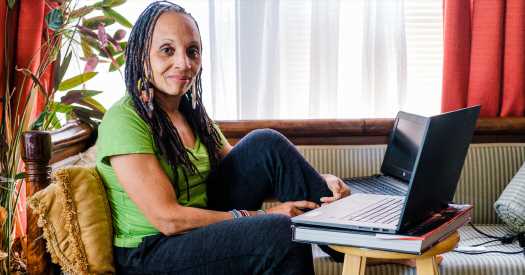 The choreographers Robert Battle and Angie Pittman had just met formally for the first time when they were left to talk one on one, in front of a live (virtual) audience, during a recent episode of the conversation series Black Dance Stories.

“I’m going to sit back and watch you two get in trouble,” Charmaine Warren, the show’s warm and energizing host, said as she raised a glass of wine and took a sip. “I’ll see you in a minute. Have fun!” And she slipped offscreen.

As it turned out, they had plenty to talk about. Battle, 48, the artistic director of Alvin Ailey American Dance Theater, had grown up steeped in gospel music through his family and church. Pittman, 31, an experimental choreographer, also grew up with church as a strong influence; her background as a liturgical praise dancer shapes her work today. By the end of their 10 minutes together, they had broken into song, an impromptu version of the hymn “Blessed Assurance.” 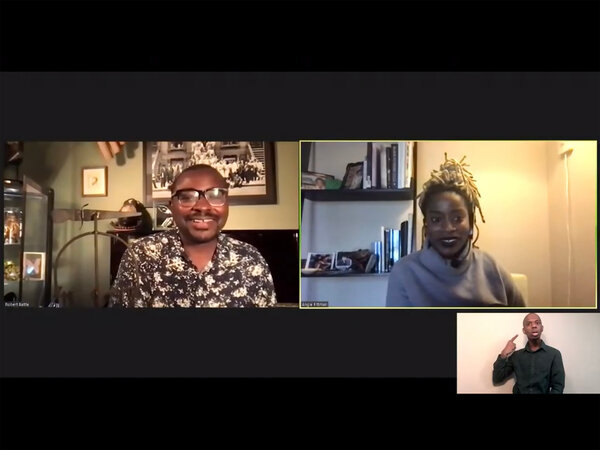 It was a typically serendipitous edition of Black Dance Stories, full of unexpected connections, unearthed through storytelling. Like so many virtual events that emerged during the coronavirus pandemic, the weekly series, which began in June 2020, started with a few people, a Zoom account and the need for community in a time of isolation. But over the past year, it has evolved into much more: a lively gathering place, a Thursday-night ritual and, most enduringly, an extensive collection of the histories of Black dance artists, as told by those artists themselves.

On Thursday at 6 p.m. Eastern, the show, which streams live on YouTube, will conclude its second season and bring its current incarnation to a close. The decision to wind it down, Warren said, came with the return of live performance; people have started going out more often, not as bound to their homes or computer screens.

But Warren, who produces the program with a tight-knit team she calls the “the B.D.S. family,” stresses that in some ways, Black Dance Stories isn’t going anywhere: The nearly 50 episodes, featuring more than 90 guests across generations and genres of dance, will remain online, a free resource for anyone wanting to learn or teach about the work and lives of Black dance artists.

“The biggest thing we have built is an impressive archive,” Warren, 60, said in a phone interview from her home in Montclair, N.J. “That’s a good thing we’re walking away with.”

In addition to keeping the archive on YouTube, she hopes to find a Black-led institution to house it in a more official capacity. She is also dreaming up the show’s next chapter (still in a planning phase): an in-person version, with guests from the online series moving together onstage.

A curator, performer, dance historian and writer, Warren — known affectionately to many as Mama Charmaine — began envisioning Black Dance Stories in the early days of the pandemic, when so many in the dance world were stuck at home with no work, their usual routines and social circles fractured. The murder of George Floyd, she said, heightened her desire to bring Black dance artists together to share their stories.

“When George Floyd was murdered, I was so empty,” she said. “My heart was hurt. And that’s when I felt even more of an urge to do something for our community.” As depleting as that moment was, she added, “I also wanted to find some kind of a salve, and that salve is community.”

The show’s clear but open-ended structure allows for both solo storytelling and intimate dialogue. Most episodes pair two guests, each of whom is invited to speak, to tell any story, for 20 minutes; in between, they overlap in conversation. They might already be well-acquainted or, as with Battle and Pittman, just getting to know each other. The pairings, Warren said, were based primarily on when guests were available, which led to some surprising matches.

“Introducing people is so much a part of her spirit,” said Battle, who has known Warren for over a decade, “this notion that, ‘Oh, you two need to know each other,’ and then stepping back to give space for whatever needs to come out of that.”

“It only works because of her,” Pittman said, reflecting on the uncertain moments when guests are dropped into conversation. “She has an incredibly supportive way of being that lends itself so well to a show like this. It’s fueled by her excitement about the people.”

While Warren offers occasional prompts — and shout-outs to and from the audience, who can participate via live chat — she is not so much an interviewer as she is an encouraging listener, staying mostly offscreen.

“It keeps the focus on the artists,” said the choreographer and dance educator Kimani Fowlin, the managing director of the series. “We really want it to be about their story.”

The writer Eva Yaa Asantewaa, a senior curatorial director at the dance organization Gibney, said that the show is not only “a lot of fun” but that it also does the vital work of allowing Black artists to speak for themselves, “as opposed to being talked about and defined by other people.”

“Our need to document what we do as Black creatives in this society is always an issue,” Yaa Asantewaa said, “because so much information is lost or distorted, or other people take credit for things. So to be able to connect with artists who are telling their own stories in their own way and dialoguing with one another about their lives is invaluable” — and not only now, “but also down the line, for future artists and future fans of dance.”

“What Charmaine has done is historic,” she added. “It should be preserved and honored.”

From its beginnings with a team of four people and no funding aside from individual donations, the program has grown considerably in the past year, while maintaining the living-room-party atmosphere that Warren set out to create. A partnership with the Brooklyn organization 651Arts, announced in January, provided a financial boost. The team behind the series has more than doubled in size, and their work has made its way into college dance curriculums. In August, episodes began including American Sign Language interpretation for wider accessibility.

Sydnie L. Mosley, the founder of the Harlem-based collective SLMDances and a dance educator, said that the Black Dance Stories archive has great potential as an educational resource.

“It’s filling the gaps of a lot of things that we did not learn in our dance history classes,” said Mosley, who appeared on the show last summer with the choreographer Raja Feather Kelly. “We get to have access to more people and their practices than if we were waiting for their work to be reviewed, or waiting for an academic to write an article about them.”

The stories that fill the archive are often deeply personal. When members of the Black Dance Stories team introduce themselves at the top of each episode, they say a few words about their ancestry, underscoring, as Warren says, that “we didn’t get here alone.” Guests tend to follow their lead, discussing both their family and artistic lineages.

For the last month of the series, Warren has been honoring her own dance lineage by featuring founding members of the International Association of Blacks in Dance and influential arts presenters. The final episode will bring together one of those founders, Joan Myers Brown, and Mikki Shepard, the original producer of DanceAfrica, an annual festival at the Brooklyn Academy of Music that began in 1977 and that Warren now produces.

“I stand on the shoulders of these Black powerful women,” Warren said. “We would not be here without them.”

The show’s pairings continue to have ripple effects. Kelly and Mosley, who knew each other before their episode, both said the experience had strengthened their professional relationship. “Now we have this connection that’s like, ‘Hey, I’m going to look out for you and your artistic interests,’” Kelly said. “And she’s doing the same for me.”

And while Battle declined to give details just yet, he said that a project of some kind is in the works for him and Pittman. “Whatever it will be,” he said, “it will definitely be a result of this connection through Black Dance Stories.”

06/29/2021 Entertainment Comments Off on Black Dance Stories: By the Artists, for the People
Recent Posts