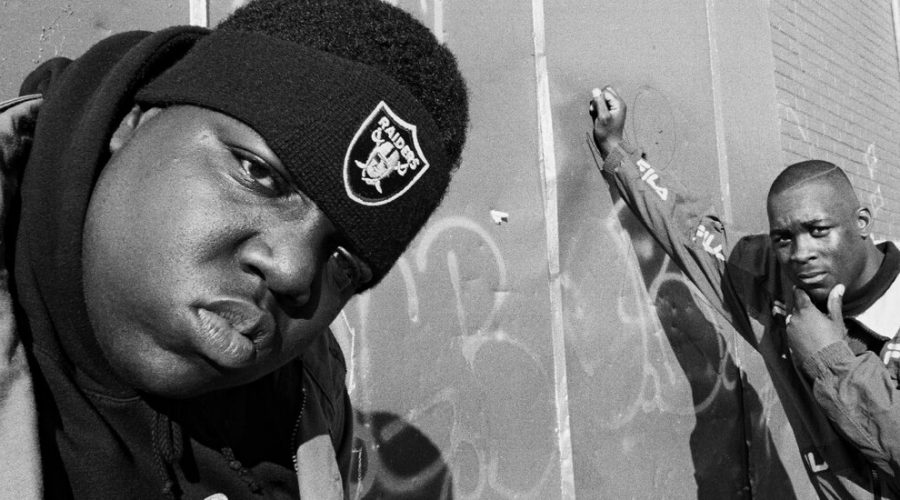 There are only a few known photographs of the Notorious B.I.G. and Tupac Shakur standing side by side, but just one that’s truly canonical. It’s from 1993. Biggie is on the left in a checkered headband, posed tough, toothpick jutting out of his mouth. Pac is on the right, in a THUG LIFE beanie and a black leather vest over a skull-and-bones T-shirt, extending both middle fingers. They look a little standoffish to each other, two people taking a photo they’re not quite interested in sharing with the other.

Photos are incomplete snapshots, of course. And Biggie and Tupac were friends before they became rivals. That’s clear from footage of that same day — from their friend era — which appears late in the new Netflix documentary “Biggie: I Got a Story to Tell.” They’re sitting at a table together, and Tupac is rapping for Biggie, an optimal audience. Both of them are lighthearted, two young rising stars finding a little respite with each other. As for the photo, a pose is just that.

Memory — history — is what’s left standing when all the rough edges are sandpapered down. And in the case of the Notorious B.I.G. — who was one of the most commercially successful and creatively impactful rappers of the 1990s, and whose 1997 murder was a wound to the genre that remains unsolved — history has perhaps been unreasonably flattening. Almost two and a half decades later, the Biggie Smalls narrative (music aside) often feels reduced to a few image touchstones, or even just facial expressions, to say nothing of the generations-later conflation of the Biggie and Tupac story lines into one, especially given that their musical careers told very different tales about hip-hop at that time. 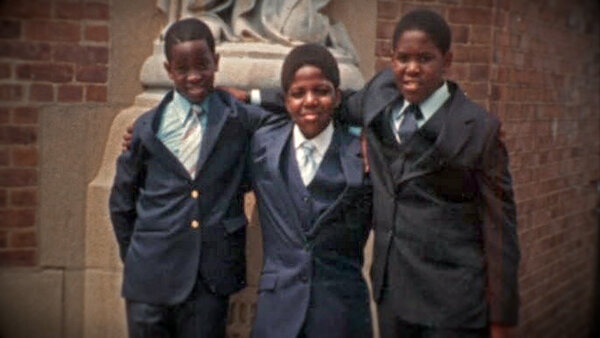 This fuzzying of the truth is a problem addressed head-on by “Biggie,” which is, in the main, a prehistory of the Notorious B.I.G. Maybe half of the film is about his music career, and of that, not much at all is devoted to his commercial prime. This makes the film anti-mythological, but also far more robust.

The first footage you see in “Biggie” is of the rapper, then in his early 20s, shaving and joking about trying to hold tight to looking like his 18-year-old self. A little bit later, he’s goofily singing Jodeci’s “Freek’n You,” a slithery classic of ’90s R&B. For so long, Biggie has been enshrined as a legend, a deity — it unclenches your chest a bit to see him depicted as human.

The story that “Biggie” — directed by Emmett Malloy, and reliant upon ample ’90s videotape shot by Biggie’s childhood friend Damion (D-Roc) Butler — wants to tell is about how Christopher Wallace became Biggie Smalls, not how Biggie Smalls changed the world. It delves into the relationship between his parents: Voletta Wallace, who has become a public face of mourning and grief, and the father he barely knew. It recounts childhood time spent in Jamaica, where his mother was born and where much of his family still resides, leaving largely unspoken the way that Jamaican toasting and melody slipped into his rapping.

It spends time with Donald Harrison, a saxophonist who played with Art Blakey, McCoy Tyner and Lena Horne, and lived on Biggie’s Brooklyn block, and who had a mentor relationship with a teenage Biggie — playing him jazz albums, taking him to the Museum of Modern Art, encouraging him to think beyond his neighborhood and to treat his rapping as an artistic practice.

Harrison’s mentoring, though, is only one part of Biggie’s childhood education. The drug bazaar on Fulton Street, just around the corner from the stoop his mother rarely let him stray from, beckoned him and his friends. Eventually, he was selling crack, and the operation he and his crew ran took in a few thousand dollars a week, according to an old interview excerpted in the film. One time, he left crack out to dry in his bedroom, and his mother, thinking it was old mashed potatoes, threw it out.

Before he was offered a pathway into the music business by Sean Combs, then Puff Daddy, selling drugs was Biggie’s most likely route. And for a while, the two careers commingled. Even Easy Mo Bee, who produced six songs on “Ready to Die,” describes driving onto Fulton to see if Biggie was on the block, offering to take him for rides as a strategy for disentangling him from his street business. But in 1992, Biggie’s childhood friend and running buddy Roland (Olie) Young was killed by his uncle, Carl (I-God) Bazemore, in a street dispute, and afterward, Biggie turned hard toward music.

By that time, Biggie had already appeared in the Source magazine’s Unsigned Hype column. He’d also participated in a Brooklyn corner freestyle battle (that was fortuitously videotaped) that helped connect him with the D.J. 50 Grand, who he would record his demo with.

But even though his career was a spectacular comet ride, most of the parts of the film about that robust success focus more on how he treated his friends, and brought them along for the journey (under the Junior M.A.F.I.A. moniker). At one point, Biggie and a cameraman bust in on Lil’ Cease in a hotel room, undressed, and Biggie immediately turns into a big brother, turning to the camera lens and asking for privacy for his friend. Occasionally there is commentary from Combs, who is almost literally shining, a visual representation of the luxurious life that hip-hop would provide an entree to, which Biggie rapped about as fantasy but wouldn’t live to see.

Most of the meaningful footage here is happenstance — a brutal trip on a tour bus without air conditioning or casual chatter in a room at Le Montrose, the Los Angeles hotel, during his final time in California. (The helicopter footage of Biggie’s funeral procession is also deeply moving, framing his death, and life, as a part of the city’s very architecture.)

In the March 1997 San Francisco radio chat that’s presented as his final interview, Biggie is already sensing the way in which history will be selective in how it retells a deeply complicated narrative. Asked about his troubles with Tupac — who by then had died, but who had become a vicious antagonist before — Biggie doesn’t sound or look even slightly resentful. Instead, he’s measured, hoping to unravel a tricky knot before it becomes fixed. “Take a chance to know the person before you judge a person — that goes with anybody, not just me,” he tells the interviewer. “Try to get the facts first.”

03/02/2021 Entertainment Comments Off on Biggie Smalls, the Human Behind the Legend
Recent Posts