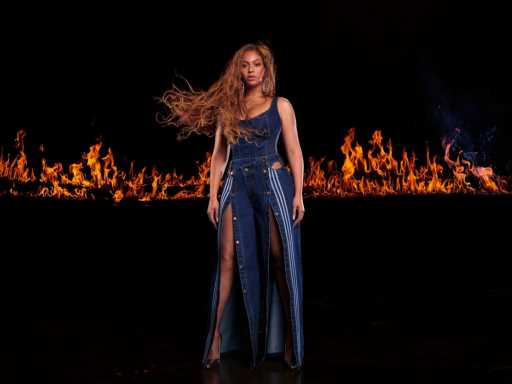 Let’s all just admit that Beyoncé knows how to shut down the internet. That’s exactly what the pop star did on Thursday when she released a revealing naked photo for the album cover of her new album, Renaissance, which will drop on July 29.

The 40-year-old mega-star put a lot of thought into what the cover art would look like, she never randomly decides on a concept. The nude image is striking and powerful as it shows her riding in on a digital image of horse, who looks charged with electricity. She sits on the animal, facing the camera with a strong gaze, and nothing but silver body chains cleverly covering her nipples and hugging her bottom. Besides the gorgeous snapshot, Beyoncé also dives into the message she’s sending with her upcoming album because it’s all about “a place to dream and to find escape during a scary time for the world.”

She gave an insider detail about when she recorded this album — it came while we were all in quarantine during the pandemic. “It allowed me to feel free and adventurous in a time when little else was moving,” Beyoncé wrote in the caption. “My intention was to create a safe place, a place without judgment. A place to be free of perfectionism and overthinking. A place to scream, release, feel freedom. It was a beautiful journey of exploration.”

The “Run the World” singer then added a personal note to all of her followers, writing, “I hope you find joy in this music. I hope it inspires you to release the wiggle. Ha! And to feel as unique, strong, and sexy as you are.” Beyoncé has already released the first single from the album, “Break My Soul.” The catchy dance track is racing up the Billboard charts and is on the road to becoming the defining song of the summer — which is exactly how Beyoncé planned it.