Ben Affleck and Gary Oldman joined four other actors in a Hollywood Reporter roundtable in which they discussed how the film industry has had to adapt to a COVID-19 world along with some of the surprising outcomes from the upheaval.

“The business was changing a lot already,” Affleck said in the discussion, published Wednesday. “Dramas were largely going away theatrically, having to do with competition from extraordinary stuff on streaming services, being hard to price and the expense of getting adults out of the house on weekends. Now people have been taught that they can just watch at home and that’s fine, so I think it’ll be very hard to get those kinds of movies back in theaters.”

Affleck estimated that 300 films had been released theatrically in 2006 and said that in the future there will “probably be 40 movies a year that come out… mostly action, effects, tentpole sequels and superhero, that kind of movie that you can really count on.”

“They log how many people are watching — I think it’s if you’ve clicked on and watched for two minutes, then it counts as a view. So I enjoy the streaming services like everyone else,” Oldman said. “But I was recently in London, and ‘Mank’ was playing a three-minute walk from my hotel, and I thought, “I’ve never seen this on the big screen. I’ll go find out what the other customer thought of it.” 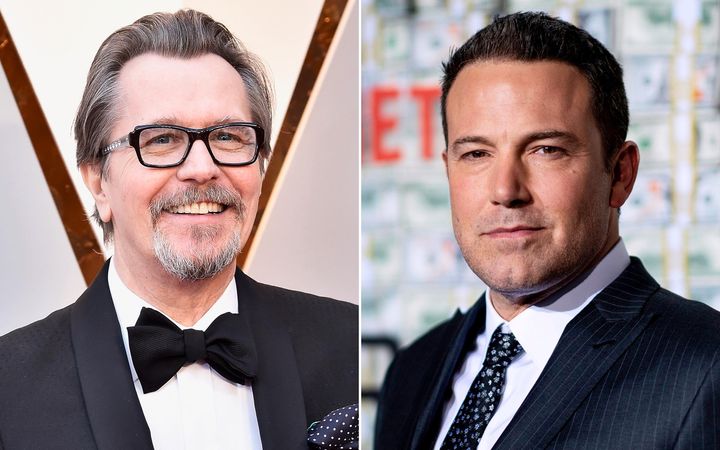 “Mank,” a David Fincher black-and-white drama in which Oldman stars as screenwriter Herman J. Mankiewicz, who wrote the screenplay for Orson Welles’ “Citizen Kane,” was released in early December on Netflix, which also produced the movie and gave it a limited theatrical release.

“I went and there were about 11 people in the audience, but there was something to be said for being in this big space in a dark room watching this thing 40 feet across,” Oldman said. “It played faster. I think the gags worked better. And certainly the guy behind me was having a good time. So there’s advantages and disadvantages.”

Affleck, who called the film “magnificent,” added that he wasn’t sure if “Mank” would have been greenlit by anyone other than Netflix, stressing that “you’d have a giant amount of pressure to have that movie do a bunch of money in the first weekend.”

“So the fact that it got made is probably because a streaming service made it,” Affleck said. “I’m just glad it happened.”

Other actors in the roundtable included Sacha Baron Cohen, who filmed “Borat Subsequent Moviefilm” throughout the U.S. in the middle of 2020, and John David Washington, who starred in Christopher Nolan’s action-thriller “Tenet.”

Cohen said the pandemic moviemaking process required spending “a million dollars of the budget for testing” and protective gear, while Washington said that the many delays “Tenet” had faced made him worry that his first starring role in a Nolan film wouldn’t receive the same attention as the director’s prior projects.

“Tenet” was delayed three times due to COVID-19 before finally receiving a U.S. release in September. The film failed to break even, and when Warner Bros. announced three months later that it would move its entire 2021 slate to HBO Max, including similar big-budget films like “Dune,” Nolan lashed out at the company, accusing it of making a decision that “makes no economic sense.”

Also participating in the roundtable were Steven Yeun and Delroy Lindo.

A HuffPost Guide To Coronavirus