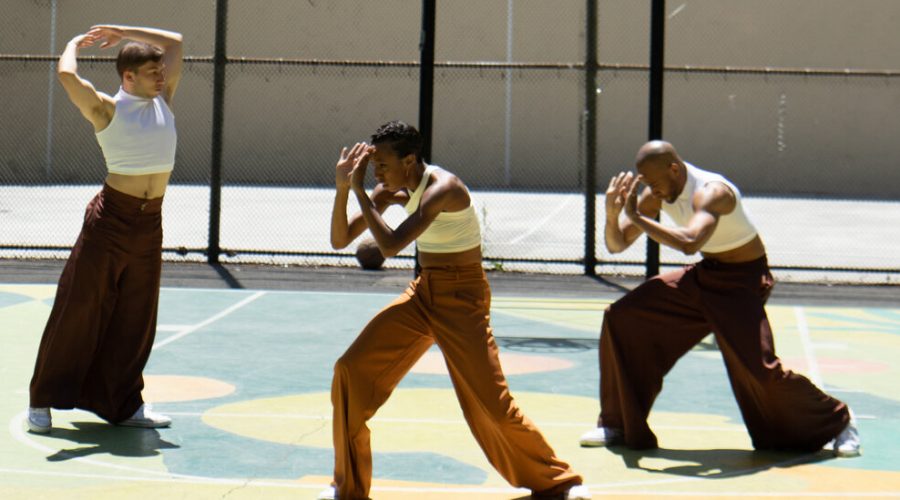 Uplift is what people expect from Alvin Ailey American Dance Theater. And so it is no surprise that for its spring gala — this spring of all springs — the company focused explicitly on themes of hope, promise and the future.

What’s pledged is delivered, with much of the roteness that comes with reliability. But the Ailey company’s official hope doesn’t entirely eclipse a more troubled and therefore trustworthy kind, supplied mostly by the troupe’s increasingly important resident choreographer, Jamar Roberts.

The one-hour gala, available free on the company’s website until Saturday night, is a typical Ailey product. Like other troupes, Ailey needs to ask for donations and make a case for its importance, but here the asking and endorsing are done by Alicia Keys and Michelle Obama. Attractive dancers and adorable students plug themselves. As part of an earnest tribute to Washington, the company’s “second home,” Representative James Clyburn, Democrat of South Carolina, makes an appearance; and Lonnie G. Bunch III, the secretary of the Smithsonian Institution, likens Ailey to the organization he runs. It’s cross branding.

Three company members — Ghrai DeVore-Stokes, Chalvar Monteiro and Kanji Segawa — debut their first choreographic efforts, each tackling one of the three theme words. These pieces look like first efforts, without much distinctive juice or spark. Each is filmed in a striking New York location — the Vessel at Hudson Yards, a basketball court in St. Nicholas Park, the Unisphere in Flushing Meadows Corona Park — but the generic quality of the choreography is heightened by generic music, courtesy of a commercial licensing service. (A budget measure? At least in Monteiro’s “Promise,” the most stylish of the three, the music is generically funky.) 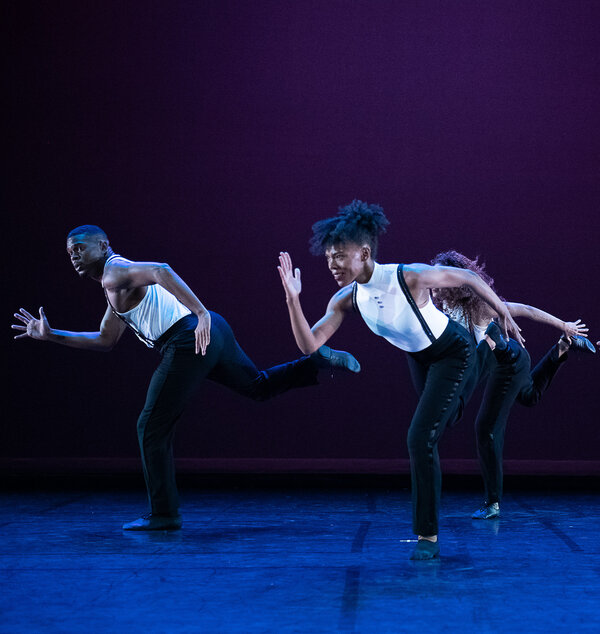 The opener, “For Four,” a new piece by the company’s artistic director, Robert Battle, is more intriguing. Battle explains that the four-person work “speaks to the pent-up energy over the last year and a half,” and says that it’s a manifestation of being “free to express ourselves.” With all its spinning and attitudinizing to a jazz track by Wynton Marsalis, it can seem like simple release. But there’s also a darker, more desperate undertone, a hint of having to perform.

In the middle, Renaldo Maurice writhes in a floor projection of an American flag. At the end, while the other three dancers strike Black Power poses, he rolls on the ground in a circle. Something more than pent-up energy is being expressed.

That something more is less hidden in Roberts’s contribution, a solo tribute to the civil rights hero John Lewis called “In Memory.” Silhouetted against a white brick wall, Roberts crosses the screen, bending and rising to a piano version of “Precious Lord.” The matador strength and strain of his stance, and the way his body bends, deliver more of the pain and majesty of Lewis’s struggle than Rep. Clyburn’s words in praise of his late friend.

Then “In Memory,” by far the strongest part of the gala program, suddenly ends. It’s only an excerpt, alas. Fortunately, more of Roberts’s recent work can be found elsewhere. An Ailey virtual program for Cal Performances, released earlier this month and available on demand through Sept. 8, features his new “Holding Space.”

In it, the members of an ensemble are silhouetted in lines against blue light (by the excellent Brandon Stirling Baker). Their movements are a little mechanical but with an irregular rhythm and stretch that suggest an imminent breaking down or breaking free. Later, the dancers take turns inside a cube of scaffolding on rollers, while other dancers move the cube around. Those attendants are holding a space for the soloist, but it’s an ambiguous one: maybe a space of healing, maybe a cage.

This is a difference between Roberts and the newbie choreographers of the gala program. His choreography — individual, original and freshly contemporary in feel — says something, even as it resists paraphrase. “Holding Space” ends with a backlit vision of apotheosis, which if it’s uplifting, is shaded by what precedes it and is thus earned.

The concern with confinement has been a running theme in Roberts’s work. It was there in “Cooped,” the remarkable short film he made on his iPad at the start of the pandemic for Works & Process. Accompanied by bagpipes and drums, his tightly framed body expressed, with a terrible beauty, a sense of emergency that was of the moment, but also deeper and older.

It’s an idea he’s expanded in “Colored Me,” a film he made during a fellowship at the Center for Ballet and the Arts at New York University. Again, his body is tightly framed, but now his image is blurred and shadowed. His dancing is intercut with a slow release of text: Zora Neale Hurston’s well-known quote, “I feel most colored when I am thrown against a sharp white background.” By the end, he has thrown himself against a sharp white background, filling the frame in a fetal position.

Like “Cooped,” “Colored Me” resonates both broadly and narrowly. The quote comes from Hurston’s essay “How It Feels to Be Colored Me,” and the dance could be seen as exploring what it might mean to be free to express oneself, how it might feel. I wonder if among the many kinds of confinement on Roberts’s mind lately, one might be the Ailey expectation of uplift. He seems to be resisting it productively.