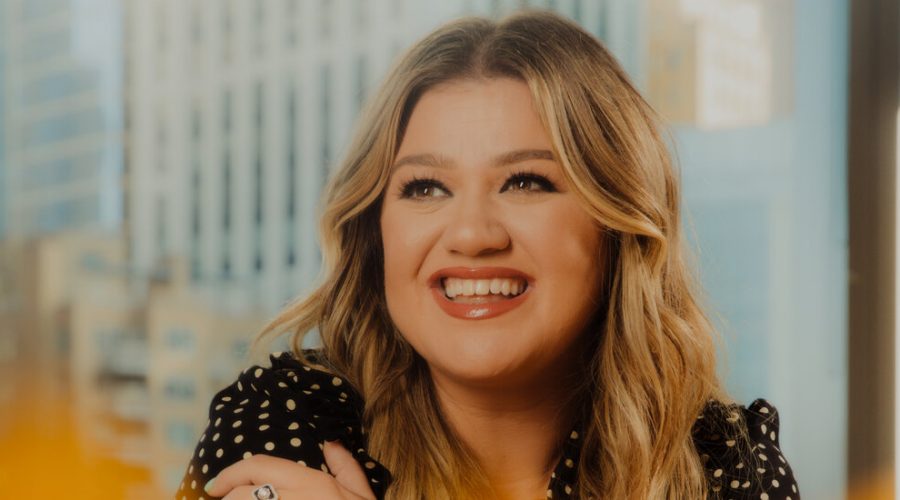 After its first two seasons were disrupted by the pandemic, “The Kelly Clarkson Show” has big expectations to fulfill. But its host is ready to come back better and, yes, stronger.

Kelly Clarkson is already being groomed as the replacement for Ellen DeGeneres even though “we’ve never had, really, a moment with our show where it’s like everything’s going to plan,” she said.Credit…Justin J Wee for The New York Times

Kelly Clarkson had just come striding through an aisle of the Appel Room one afternoon in late August, accompanied by Kristin Chenoweth and a troupe of dancers as they sang the final bars of the uplifting Imagine Dragons ballad “On Top of the World.”

In the minutes between catching their breath and performing the number for a second time — part of an elaborate musical sequence that will open the third season of “The Kelly Clarkson Show” — the host called out from her stage here at Jazz at Lincoln Center and offered a tongue-in-cheek apology to Chenoweth and the ensemble if she had missed any steps in this earlier take of the routine.

“I was freaking out,” Clarkson said. “You do not want your entrance to depend on me.”

Though she has already been many things in her career — the winner of the inaugural season of “American Idol”; a best-selling, Grammy Award-winning pop and country musician; a coach and adviser on “The Voice” — Clarkson will gladly admit she is still a novice when it comes to starring in her own syndicated daytime talk show.

Throughout a day spent taping segments for her show’s premiere week, which begins on Monday, the spirited, self-deprecating Clarkson had been telling her studio audience she felt rusty after coming back from a scheduled filming break of about three months. But there was not much time for her to get back up to speed and, as she has gotten used to, she would have to figure things out on her feet. 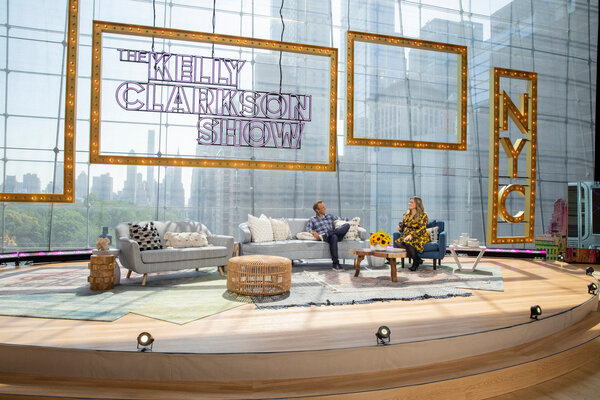 At a moment like this, much is expected of “The Kelly Clarkson Show,” a blend of celebrity interviews, games and slice-of-life segments informed by the 39-year-old host’s pop-cultural sensibilities. The program is coming off its first Daytime Emmy win for best entertainment talk show, a category in which Clarkson has vied with established competitors like Kelly Ripa and Ryan Seacrest (the longtime “Idol” host) and newcomers to the field like Drew Barrymore.

NBCUniversal, which produces “The Kelly Clarkson Show,” has renewed the series through the 2022-2023 season and has said it will give Clarkson’s program the slot now held by “The Ellen DeGeneres Show” when its veteran host steps down next spring after 19 years.

These decisions provide added incentive for Clarkson while significantly raising the stakes: At a time when her show is still finding its footing — and has yet to have anything resembling a normal season — she is already being groomed as DeGeneres’s heir.

This coming season of “The Kelly Clarkson Show” was supposed to be the one where she and her colleagues would show off the full potential of the program, unencumbered by growing pains or pandemic restrictions; by opening it in New York, they hoped to spotlight a city, a host and a TV series that were fully restored and back to business as usual.

The recent resurgence of the coronavirus has put a cloud over much of that. But as Clarkson prepared to forge ahead in New York — before returning to the show’s home in Los Angeles for another week’s worth of season-premiere programming — she said she had gotten accustomed to the uncertainty that has so far epitomized her talk-show experience.

“It’s kind of been like that from the get-go,” Clarkson said. “From Season 1, we’ve had to reinvent it. We’ve never had, really, a moment with our show where it’s like everything’s going to plan.”

A few days before shooting her season premiere, Clarkson was speaking in a video interview from Los Angeles, comfortably dressed down with her hair held back in a ponytail while her dog Henry played at her feet. “I appreciate that I can do this in sweats and no bra,” she said with delight.

That relentless candor has a lot to do with how Clarkson got this gig — it’s a quality that her fans and advocates find relatable. But it also gave her the freedom to nearly turn down the show. Thinking back to the period a few years ago when she was being sought as a host, she said: “Everybody was like, Oh man, you would be great at doing a talk show — except for me, I wasn’t one of those everybodies. I’m just like, Where do I fit in there? Why would I? No one will watch that.”

She added, “I’m very honest with myself.”

Alex Duda, the showrunner and an executive producer of “The Kelly Clarkson Show,” said that she was among those early recruiters who were impressed by Clarkson’s energetic, unpredictable appearances on “The Voice.”

Duda, who previously produced daytime talk shows for Steve Harvey and Tyra Banks, said that Clarkson was also distinguished by her formative “American Idol” victory in 2002, a process in which millions of viewers witnessed and participated in her ascent to fame.

“We chose her,” Duda said. “She connects with us in a way that nobody does because we helped with that. People are rooting for her in a different way.”

Clarkson, who was 20 when she won, said she had also come to realize how “Idol” had unexpectedly prepared her for a future in daytime television.

“We were on TV all the time,” she said wearily. “Doing random things — being interviewed, interviewing other people, doing skits.” To this day, she said, she never worries about having something to say when a camera is pointed at her: “I don’t really feel pressure from that. That can be scary for other people sometimes, like, Oh God, what’s she going to say?”

With a blueprint that allowed her to perform a new cover song in every episode (or Kellyoke, in the show’s parlance), and a guest list that enabled her to share a stage with musical heroes like Trisha Yearwood, Reba McEntire and Garth Brooks, Clarkson embarked on the first season of her program in September 2019.

In March 2020, in-studio production of the show was halted by the pandemic. But Clarkson, who had left Los Angeles with her two young children to hunker down in a cabin in Montana, continued to produce new segments for the program that she recorded on an iPhone.

Clarkson said she had found the experience as invigorating as it was frustrating. “We were in the middle of nowhere,” she said. “The dryer broke. We’re going to the bathroom in the woods at some point. I’m 5’3” and a half, dude. I’m in snow up to my thighs. And I’m like, well, I have a camera.”

She added: “I’m trying to be America’s cheerleader. And I never completely broke down about it, but I definitely laughed hysterically at several moments.”

In its second season, “The Kelly Clarkson Show” was able to return to its Los Angeles studio with pandemic protocols in place: Panel discussions were socially distanced, and audience members could participate only virtually, appearing as heads and torsos on flat screens. (A limited studio audience will be allowed to return in Season 3.)

These circumstances were not ideal for a fledgling program still trying to find its footing. “You’re trying to build on momentum,” Duda said. “For us, it was difficult being a show about connection when you can’t connect physically. We haven’t been able to realize our mission.”

Jason Halbert, who is the show’s musical director and has worked with Clarkson for almost 20 years, said that he has seen her thrive in fluctuating settings, as a musician and as a host.

When he is touring with Clarkson, Halbert said, “There’s a new text every morning of a great new idea she has.”

“I wake up in Vegas and she’s like: ‘You know what? I want a harp player for my show today. I want a kids’ choir.’ I love those challenges.”

Halbert said he had experienced a similar volatility on the talk show. “Scripts are being written, reviewed, at 11:00, 11:30, midnight the night before,” he said. “There’s rewrites, there’s a new surprise or a new guest. My morning starts with about three or four requests, every single day, of some new music that has to be created. There’s nothing routine about it at all.”

But over their years together, Halbert said he had seen Clarkson go from a plucky neophyte to a star, a mother and a leader. “Her voice has grown, her stage presence — everything about her has grown,” he said.

By the end of last spring, “The Kelly Clarkson Show” was drawing an average daily audience of about 1.3 million viewers, frequently putting it ahead of “Ellen” and other competitors like “The Rachael Ray Show,” though it doesn’t surpass category leaders like “Dr. Phil” or “Live With Kelly and Ryan.”

Despite the obvious indicators that Clarkson is being positioned to step in as successor to DeGeneres (whose show is produced by Warner Bros.), no one is quite ready to talk about this explicitly while DeGeneres is still on the air.

Even so, Wilson said that the coming season of “The Kelly Clarkson Show” was an important opportunity to reintroduce the show to viewers.

“We are treating Season 3 like a launch,” she said. “We’re putting everything behind it. Because we’re still an infant of a show and we have so much more to do. We’ve had so many stops and starts with the pandemic.”

Clarkson — who has featured DeGeneres as a guest on her show and appeared several times on “Ellen” — played down comparisons between them. “No one can take over for Ellen. It’s an iconic show,” she said.

She argued that her efforts as a talk-show host shouldn’t be measured against those of her illustrious predecessors, any more than she should be gauged as a singer in comparison to the vocalists who inspired her.

Clarkson — who is simultaneously preparing a new Christmas album for release later this year — said there was still value in trying to produce positive, uplifting entertainment. It is a goal that hasn’t been deterred by the many months of coverage that her continuing divorce from her onetime manager Brandon Blackstock has yielded for celebrity sites like TMZ and Us Weekly.

“It’s supply and demand,” she said. “People demand it, so they supply it, unfortunately. I’m not mad at it. But I don’t have to subscribe to it.”

Clarkson spent much of an afternoon taping in New York trading enthusiastic repartee with Chris Martin, the lead singer of Coldplay and a personal fave she was meeting for the first time. She swooned over his accent and contributed vocals as he played her an acoustic-guitar cover of Whitney Houston’s “I Wanna Dance With Somebody (Who Loves Me).”

During a question-and-answer segment, Martin sheepishly said he was nervous. “I’ve never been interviewed by someone who’s a better singer than me,” he explained.

Clarkson threw up her hands and pretended to walk off the stage. “I’ve achieved greatness,” she said triumphantly.

Later, Clarkson brought out her 7-year-old daughter, River Rose, and 5-year-old son, Remington, so that they could hear Martin play a solo performance of the Coldplay song “Green Eyes.”

Martin had gotten only a few bars in when Remy motioned to his mother and said, loud enough for the audience to hear: “I need to go to the bathroom.”

It was one of those unscripted moments that Clarkson lives for, and she seized it. As her son trotted off the stage, the delighted host told the crowd that she never seems to have this problem herself.

“I always go right before my show starts,” she said. “Because I’m panicked about it.”

09/09/2021 Entertainment Comments Off on As a Daytime Host, Kelly Clarkson Has No Fear of Being Vocal
Recent Posts