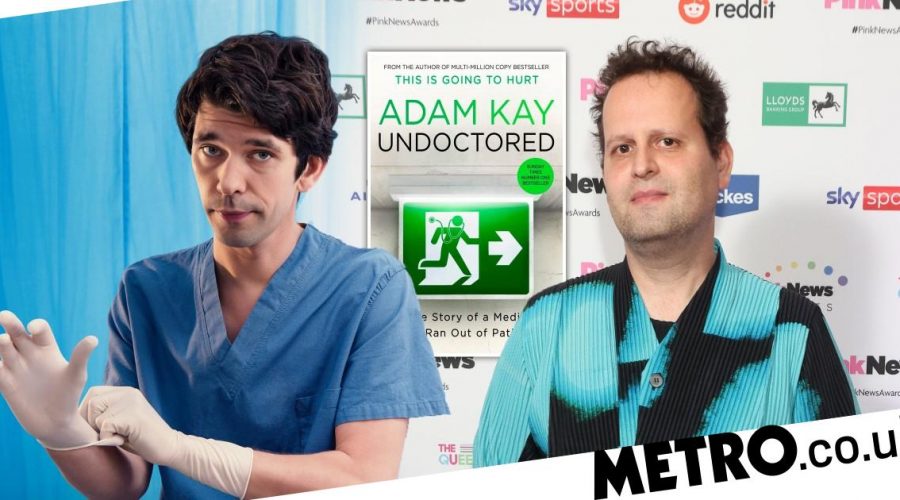 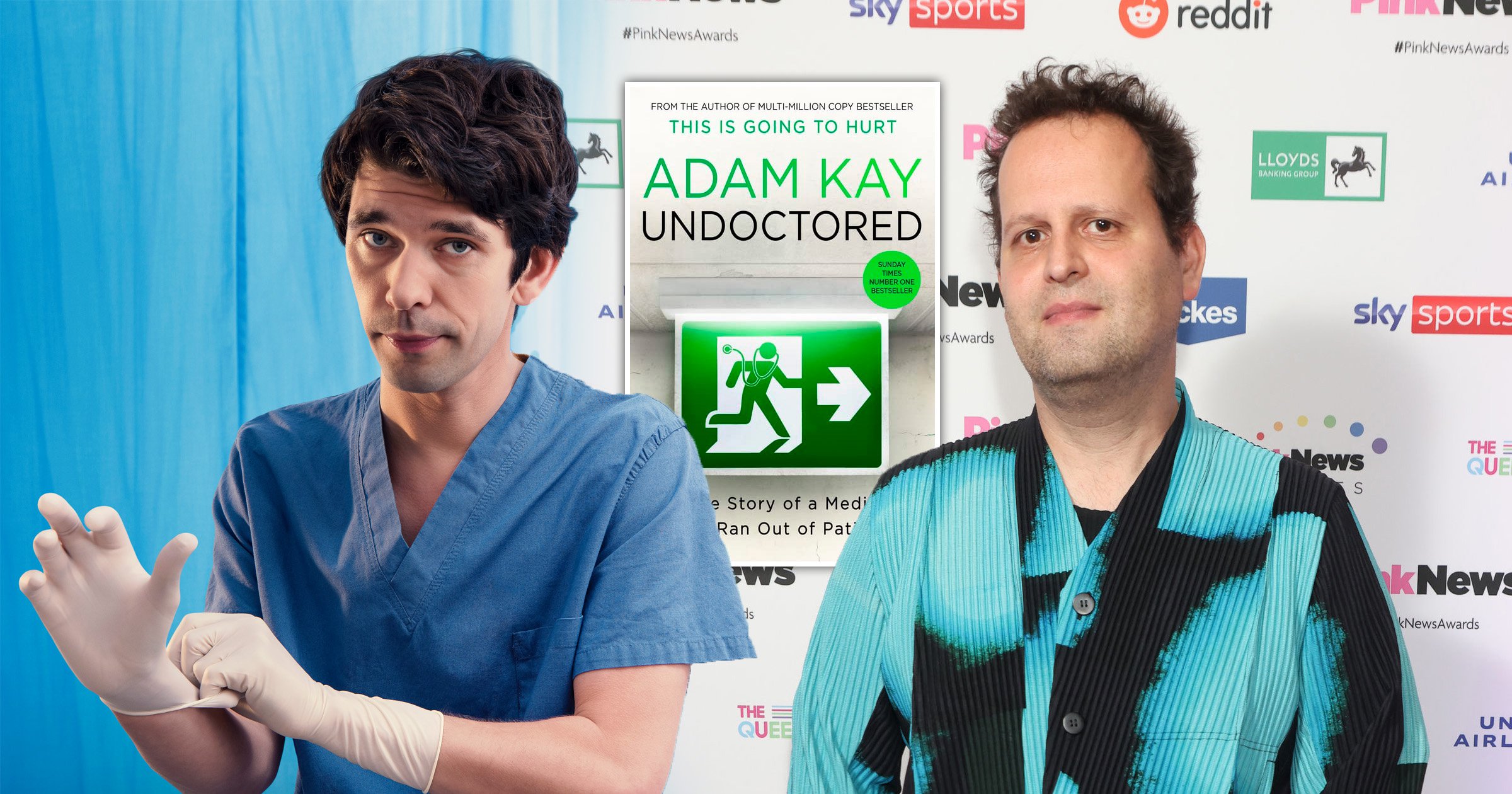 Adam Kay is busy man, fresh off the triumph of his bestselling book, Undoctored, his new memoir all about what happened after he hung up his scrubs as a medic and made a go of his comedy career.

The fact Undoctored follows on from his mammoth success with This Is Going To Hurt in 2017, which itself was adapted by Kay into a BBC TV series starring Ben Whishaw earlier this year, and he’s also found time to release follow-up Twas The Nightshift Before Christmas, as well as few children’s books, would suggest that it’s all gone swimmingly well.

However, Kay’s career transition was anything but smooth, as he reveals in Undoctored, which gives an unflinching account of some of the most private and vulnerable moments of his life.

That he’s been willing to share his struggles in the early days has gone down very well with fans, finding comfort and inspiration in his slog.

‘I’ve had a bunch of messages from people who said, “I’ve read that book and now I feel empowered to press the ‘f**k it’ button”, to do the thing to blow up their life and leave the thing in their world that isn’t working for them,’ he told Metro.co.uk.

Acknowledging that careers nowadays have more of a ‘jagged, weird trajectory’, he adds: ‘But I think this is hopefully a borderline success story of someone who’s tried something else and it’s worked out, even though for a very long time after leaving medicine it was a bit of a shambles.’

What the author lays out on the table during Undoctored makes it perhaps a more challenging read even than This Is Going To Hurt in places – but of course always undercut with Kay’s trademark humour (‘my coping mechanism’, he says). However, he also admits how difficult it was to be so upfront, especially when he thought he might get ‘some kind of hatred’ for doing so.

‘There’s a couple of chapters that came in and out of the book half a dozen times before the end, and I ultimately decided that for the particularly difficult topics they should stay in because it was meant to be a book about opening up. I didn’t want it to be out there and for me to know there was stuff that I’d held back.

‘Also, even if only one person comes to me to say that helped me then it was worth it. And brilliantly, a bunch of people have been in touch to say they’ve been in similar situations, but more than that, that they were now going to speak to someone about it.’

Kay has been focused this week on Amazon’s Kindle Storyteller Award, for which he acted as a judge in selecting the winning self-published story, Peter Gibbons’ King of War. He found the adjudication process ‘tough’ as the books were all so varied, as well as being impressed by the entrepreneurship of the shortlisted writers.

‘It’s all the more impressive that these people have done it pretty much single handedly. In the back of my books, I have a list of credits for all the people involved, and there’s two full pages! I hadn’t quite realised until I was talking to them at the at the ceremony that it’s like a small business and the writing is only one part of it.’

The 42-year-old also confesses that he is ‘not a poster boy’ for any newer authors over how to sit down and write, admitting: ‘I write best at night, when there’s nothing else happening, which drives my husband insane. I’m pacing around downstairs and Twitter’s gone to bed and Facebook’s gone to bed, and no one’s texting me. And so that’s [then] the one thing I do.’

What advice would you give to doctors thinking about leaving medicine?

‘It’s a very big question, and it’s a bigger question than ever. When I left medicine, I was the first or second person in my cohort of hundreds to leave. And these days, I can’t think of the last time I spoke to a doctor who wasn’t talking about their plan B, whether that was going part-time or moving to another country or working in a different industry entirely. But all I’ll say is, being a doctor is an amazing, brilliant, precious career. But if you’re struggling, and if you’re not enjoying it, you can’t do the best for your patients. And there are lots of people who say, “Oh, you must stay in the job no matter what”, and that’s unhealthy and unhelpful. Just work out what it is you want to do.

‘Write down what it is you want to do at the bottom of a piece of paper, and then see if you can work on what the steps are to getting there.

‘There is no shame in having put in your hours and your years and then going off to something else. Because medicine isn’t your defining characteristic as a as a person, it’s your job and you can’t let it destroy you.’

If you hadn’t done medicine, what do you think you would be writing about?

‘I think if I hadn’t done medicine, I’d probably have been a musician. Medicine insists that you have all these extracurricular interests and for me, that was mostly music and I really loved music. I wonder if I’d be writing for the piano right now, writing dots rather than writing words.’

Were there any aspects of the TV adaptation that veered away from the intent you had in the book, due to trauma being censored ot subtlety lost?

‘It wasn’t censored. More than one channel wanted to show it, and the BBC said to me, if you work with us – who I really wanted to work with anyway because there’s a lot of similarities between the NHS and the BBC, these big, wonderful, but imperfect institutions – we will never once tell you don’t do that. And true enough, no-one never said that. But it is quite a different thing to the book, and that was quite deliberate because it’s quite a difficult book to adapt.

‘I had to work out what do I want the TV show to be about, and I really wanted it to be centred and focused on the mental health of healthcare professionals. The first scene I wrote of the series was the moment where Shruti, one of the junior doctors, makes the decision and turns to camera and say she’s going to take her life. And every moment in this series up to then was building up to that moment.’

Talk turns to the TV series of This Is Going To Hurt. Despite the pretty conclusive (and heartbreaking) end, ever since it finished fans have been keen to know if there will – or can – be a second series. Sadly, Kay confirms this is pretty unlikely.

‘I wrote it as a one and done, a beginning and a middle and an end, and I wrote it with that as a hard ending. I didn’t want to do a second series for the sake of just because. There seemed to be a clear appetite for more, which was hugely flattering, but I had been thinking about this series for so long, for years and years, that I didn’t want to then rush out another one a year later.’

He doesn’t rule out writing something else for television though.

‘Maybe one day I’ll think of another big topic that I want to discuss and I’ll give Ben [Whishaw] a phone call and see if he’s up for it – but for now, sadly, I’ve got no plans, but more importantly, no idea of what it might be.’

Speaking of Whishaw, Kay is of course a fan of the actor cast to play the fictionalised version of Adam (who the author reminds us isn’t really him).

‘He’s a proper national treasure. There are millions of people who now presumably think that I look like Ben Whishaw too, and I’m absolutely happy with that!’ he laughs.

On a more serious note, he reveals that the point where Whishaw as Adam goes infront of the General Medical Council and quotes the statistic that one doctor every three weeks in the UK takes their life, he is using Kay’s exact words.

‘It’s such a taboo, and there’s so much stigma and shame – it’s some of the stuff I talk about in my new book – but my thought was that’s going to go into the eyeballs of eight million people and that has to start to break down the taboo, if we’re talking about it like that, so I was really proud and so glad to be supported in being allowed to talk about that for such a big audience.’

He was also delighted with the rest of the cast, saying that Ambika Mod’s self-tape for Shruti had him yelping and calling for his husband because she was so perfect. He also aimed high with Dame Harriet Walter as his preferred performer for Adam’s mum.

‘When I was writing her dialogue, I had Harriet Walter in my head. I didn’t actually think that Harriet would say yes, because she’s Dame Harriet Walter!’

Kay was also blown away by how convincing the cast were as medics.

‘The thing that I thought as soon as I started watching the rushes come together, and then a bunch of doctors have said to me, is I can’t believe they’re not actually doctors, midwives and nurses, because they just embodied it so well. I think Ambika in particular, for someone who had basically done practically nothing on-screen before – she’s just such an intelligent, nuanced actor.’

Kay is known for being active on social media and remains a big supporter of the NHS and its staff.

‘I make a point of staying in touch with everyone,’ he says, ‘because I feel I have to bang the gong for junior doctors in particular and I have to know what it’s like on the ground.

‘And things are now better – they are not better enough, there’s still a long way to go – but it’s a big ship to steer.’

Looking ahead to the end of the year, he knows it’s going to be ‘a bit of a rough ride’.

‘The mood music isn’t that there’s going to be a huge amount of extra money going into the NHS anytime soon, what with everything going on. So God bless everyone who’s working in the NHS at the moment. I really don’t know how they’re doing it.’

Adam Kay was a judge on this year’s Kindle Storyteller Award, a literary prize celebrating the best self-published story. To find out about this year’s shortlist, including the winning book, please visit www.amazon.co.uk/storyteller