It looks like a typical pop-up shop: the spare but cool neon signs, the bare whitewashed walls, the table up front for sales.

But the offerings at this temporary storefront in the heart of Manhattan are musical: the music of J.S. Bach. Inside the shop, a Juilliard-trained pianist, Evan Shinners, is playing five hours of Bach each and every day — for more than 30 straight days, even on Thanksgiving — and presenting evening concerts with guests. He calls it the Bach Store. 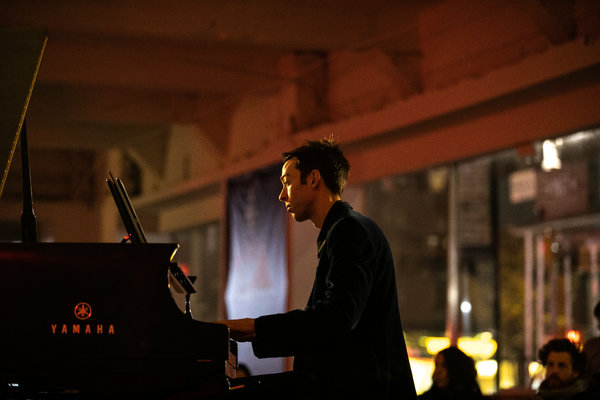 The sight of Mr. Shinners at a Yamaha grand piano behind the plate-glass windows of a former bank branch on 56th Street and Broadway, within view of the stage door of Carnegie Hall, is drawing a stream of listeners for short doses of Bach. Marica Coniglio, 33, a tourist from Sicily, stopped in after visiting the Museum of Modern Art (“It was very peaceful and unusual,” she said). David Niles, 57, a New Yorker, was picking up a Citi Bike nearby when he ducked in. (“It was an unexpected surprise,” he said.)

And the star pianist Emanuel Ax was running errands with his wife when he stumbled upon it last week and heard some Bach fugues. “I thought: wow, great idea,” he said.

The Bach Store is both an effort to make live Bach more accessible and available and something of an inward journey for Mr. Shinners, who is 32. It is also a marathon.

“My arms are falling apart,” he confessed on the 20th day as he took a break from playing preludes and fugues from “The Well-Tempered Clavier” to a small crowd ranging in age from toddlers to older adults who had paid the suggested $10 admission charge. He practices in the shop daily from noon to 5:30 p.m., and evening concerts are at 6:15.

There is merchandise, too: The shop sells T-shirts emblazoned with the name of Mr. Shinners’ alter ego, W.T.F. Bach; Bach cigarette lighters; stress balls shaped like brains that say “Yours ≠ Bach’s,” and condoms that note on their wrappers that Bach had fathered 20 children.

Mr. Shinners said the marathon was partly inspired by an experience he had seeking the tutelage of the French harpsichordist and great Bach interpreter Pierre Hantaï, who rebuffed him with a deep, two-page letter that he wound up taking very much to heart.

“He had Googled me and dismissed me as of the generation that tries to make high art accessible through YouTube gimmicks and things like that — and I was certainly guilty of that,” said Mr. Shinners, who has made videos playing Bach on two different pianos at once, and who, as W.T.F. Bach, performs electronic arrangements of Bach. In declining to meet him, Mr. Shinners said, Mr. Hantaï wrote that his concern was not a matter of style, but of spiritual elevation.

“I took it upon myself to face this quote for five hours a day and to try to elevate myself spiritually,” he said. “And to put myself in a public setting where I could expose myself in a way that I was probably previously afraid to expose myself.”

An excerpt from Mr. Hantaï’s high-minded letter, translated into English, is painted on the wall behind the piano that Mr. Shinners plays each day. “Bach is above all thought,” it begins.

The project was supported by a $20,000 grant from Music Academy of the West — which Mr. Shinners attended in 2009 — as one of its inaugural Alumni Enterprise Awards, given to music projects with community impact. Scott Reed, the academy’s president, said in an interview that Mr. Shinner’s project was “the ultimate accessibility of great music.”

As the end approached, Mr. Shinners, who had initially envisioned playing only during the month of November, decided to extend the run into the first week of December. And he is already thinking about a reprise. “So many people come in here and leave so exalted, and that’s moving,” he said. “So I think I will have to do it again.”

11/23/2018 Entertainment Comments Off on A Pop-Up Shop That Offers Bach Preludes, Fugues and Condoms
Recent Posts