Jeremy O. Harris was standing in a TriBeCa loft full of black art and the promise of money. It was a party for donors and friends of New York Theater Workshop, where “Slave Play,” the 29-year-old playwright’s professional debut, billed as “an antebellum fever dream,” opens Dec. 9. At 6-foot-5 in Gucci sneakers and a tasteful Gant sweater, he stooped to greet each attendee with a grin that seemed to begin behind his eyes before fanning out across his face. They turned to hear him speak.

“I don’t want people to be able to walk away from a play about slavery and say, ‘Oh, well, that’s not about 2018,’” he said. He was joined by Robert O’Hara, the play’s director and a personal idol. A Henry Taylor painting nearby showed a black boy seated at a kitchen table, his gaze stoic but searching. A steed outside the window behind the boy reared up on its hind legs.

“Being a black body in the world makes you feel kind of insane,” Mr. Harris continued. “You feel like you always want to laugh and you always don’t. That’s not to say you shouldn’t laugh when you see the play — please laugh. But also, maybe don’t.” (On cue, they did.)

Having two productions in the same season is rare for any artist. For one making his dual debut while still a third-year student at Yale School of Drama, it’s like commuting into Manhattan on a comet.

Mr. Harris’s work collides contemporary art and pop music with critical theory. In the same breath he can wax on the aesthetics of Rainer Werner Fassbinder and the semiotics of Rihanna’s “Work.” Though wildly different in approach, “Slave Play” and “‘Daddy’” each interrogate the legacies of white supremacy and the deep psychological turmoil inherent to black identity. They’re also startlingly sexual and demanding and funny.

This ability to render subconscious trauma into provocative theatrical expression, as potentially unsettling as entertaining, has earned him a lot of attention in a very short time.

Now that he has it, Mr. Harris doesn’t intend to let anyone off the hook.

“I could be someone who blows the place apart a little bit,” he told me earlier that afternoon, folded onto a corner couch at the Soho Grand Hotel bar over steak frites.

His work reflexively mirrors the dynamics of a room like the one we entered later. “Everyone who’s watching ‘Slave Play’ is fully a part of a system that is consuming and profiting off of black bodies and black identity,” he told me. “The play does not allow you to escape that fact.”

It’s part of what attracted Mr. O’Hara — in his own plays, like “Bootycandy,” also a provocateur — to the project. “Usually we see slave narratives about how horrible it was and how oppressive white people were, but not the collective trauma that we all inherit,” he said. “‘Slave Play’ challenges the audience from the very beginning.” 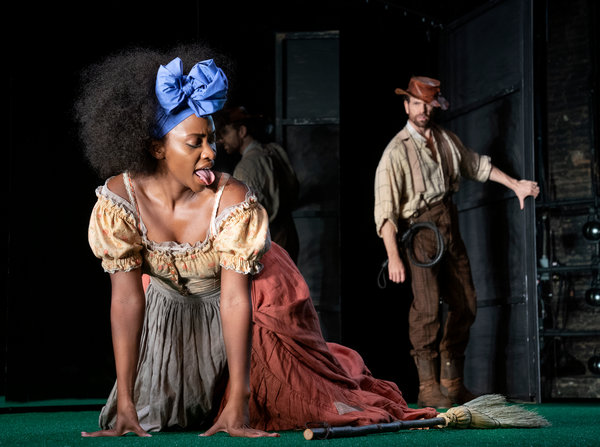 Whether theatergoers are prepared to reckon with a slave play that requires sexual content warnings remains to be seen. “It is new territory for everyone,” the director admitted. “You have to be ready for the conversation.”

A Winding Road to Playwriting

Jeremy O’Bryant Harris grew up modestly in and around Martinsville, Va., raised by a single mom who separated from his military father when he was 11 years old. When his mother became a hair stylist, he was her primary guinea pig. “It became a cool avenue to explore my queerness in a small town,” and may explain his ever-changing hair (all evidenced on Instagram in the last six months: braid extensions, shoulder-length blowout, a natural Afro).

To combat bullies, he read everything he could to be smarter than them, finding kinship with James Baldwin. When his drama teacher urged him to read every Pulitzer Prize-winning play if he wanted to understand the history of theater, he devoured them, too.

He toyed with becoming a lawyer or a preacher (“the Bible has the best stories”) before studying acting at DePaul University. Devastated when he didn’t make it past the first-year cut, he switched his major to poetry before dropping out. He found decent success getting cast in Chicago theater. With a blizzard in the forecast, he decided to try his luck in Los Angeles.

“I could be anyone in L.A.,” he said. Why not tell people he was a playwright? He’d published a play in DePaul’s literary magazine, so it wasn’t exactly a lie.

He excelled at working in high-end retail, partying behind velvet ropes and drawing creative people into his orbit. One of them was Isabella Summers of the band Florence and the Machine, who invited him on tour and said if he did finally commit to writing a play, she would compose the music.

Despite its title, Mr. Harris describes the play as a love letter to his mom. When a scene veered into esoteric territory, he thought, “This is when my mom will start to check out.” So he added a gospel choir. “It’s all the spectacle I want to see in the theater,” he said.

Danya Taymor, the production’s director, said, “He writes from a really primal place.”

“It’s like all these facets of himself in conversation,” she added.

Mr. Harris used the play to apply to Yale School of Drama; in the admissions interview, he laid out the basic idea for “Slave Play” and got accepted. A campus production of that play, which hinges on a subversion of expectations, caused a bit of a sensation last fall, according to Mr. Harris, preparation for the debut’s potentially divisive reception.

After a reading earlier this year, New York Theater Workshop quickly programmed it into the current season. “There’s an urgency to his work that’s not helped by holding it back once it’s on the page,” said Jim Nicola, the theater’s artistic director.

Tarell Alvin McCraney, the chairman of Yale’s playwriting program, compared Mr. Harris to “a supernova star that consumes everything around them and metabolizes a new energy.”

Mr. McCraney, an Oscar winner for his “Moonlight” script, is making his Broadway debut with “Choir Boy” this season, after a series of Off Broadway triumphs. He remains one of few role models whose careers began with similar flourish. (The morning after the donor event, the two were set to meet over a missed assignment. “We’re discoursing,” Mr. Harris said.)

Yet Mr. Harris’s unusual visibility, self-documented on social media and increasingly in the press, draws the sort of attention that can complicate as well as bolster a career.

“Jeremy is doing all this work to clear the path for himself — I think that’s pretty profound,” said the playwright Branden Jacobs-Jenkins, a two-time Pulitzer finalist. As a friend and fellow African-American writer in high demand, he has counseled Mr. Harris on the trials of longevity. “You have to protect your room to grow and your right to fail,” Mr. Jacobs-Jenkins said, “despite whether or not you fulfill everyone’s wishes to find the next black Jesus.”

Mr. Harris’s work has already gained traction in Hollywood. Last year he completed the screenplay for A24’s “Zola,” written with the director Janicza Bravo. The movie is based on a viral Twitter thread by the former stripper Aziah Wells, a.k.a. Zola, about her wild road trip that led to sex trafficking, a tale he compares to “The Odyssey.”

He still acts on occasion (“I’m passively an actor; if it seems fun, I’ll do it”) and will appear in his own as-yet-unannounced play Off Broadway next season. Ms. Bravo also directed him in an installment of “The Performers,” a video series from Gucci and GQ documenting influential men and their inspirations. His relationship with the label began when the actress Hari Nef, who will also appear in “‘Daddy,’” whisked Mr. Harris to Gucci’s May resortwear show in the south of France, where he charmed higher-ups.

Mr. Harris aligns his interest in fashion with a generation of artists he admires — including Baldwin, Truman Capote and Adrienne Kennedy — and maintains it’s a way to cultivate new audiences, too. If someone clocks him wearing aspirational designers in the poster for his play, “they can see a bit of themselves in a code I’m wearing,” he said. “I’ve just invited someone into the theater who didn’t know that it was for them.”

As we awaited the check, Mr. Harris was measured but confident as he reflected on the laurels he’s already received before the starting line of his whirlwind season. “It’s really humbling and feels crazy,” he admitted. “On another hand, I’m really excited that this gets to happen for a black queer person, because it’s creating a new conversation about how big we can imagine.”

We were already running late to the party in his honor.

“A one-play tiny season wouldn’t have made sense for my personality, maybe,” he said, standing up to lead the way out of the restaurant. “I’m a bit too much.”