Ken Van Sickle will never forget the day in 1955 when he became a photographer. He was in Paris, where he’d moved shortly after finishing his military service in Korea, to study painting. One day in the Luxembourg Gardens, while sketching with a friend, he had an epiphany.

“My friend said, ‘Your painting isn’t that good, but your photography really is,’” Mr. Van Sickle, 87, recalled. “I almost immediately understood he was right.”

Mr. Van Sickle soon gave up painting and began seriously pursuing photography instead. Over the next year, he shot about 60 rolls of film in bars and cafes, at parties and clubs and in streets and parks. As he developed his photographic sensibility, he formed a portrait of the kind of artistic, carefree life that has long drawn expats to the City of Light. 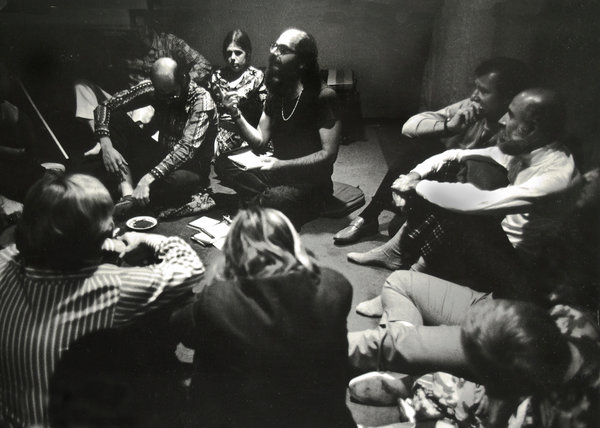 He returned to New York in 1956 hoping to make enough money from commercial assignments to return to Paris with more than the $130 a month he’d been living on from the G.I. Bill. Commercial photography never quite worked out for Mr. Van Sickle, however, and he didn’t make it back to Paris. Instead, he found work in the film industry, and, in 1963, moved into an apartment across from the Flatiron Building where he lives to this day.

Then, as now, Mr. Van Sickle’s photography closely mirrored the events of his own life. When he took a vacation, or traveled for a film shoot, or went to a party, or even stepped out of his front door into the hallway, he always had a camera. Over the years, he experimented with infrared photography, Polaroid manipulations and multiple exposures. But the bulk of his work is simple black-and-white images, and his subject has essentially remained the same.

“I’m not a ‘concerned photographer.’ I don’t take pictures of war or gangsters,” he said. “I like happiness. I like people having a good time. People sometimes think those things are inferior because they’re not serious. But that’s what I like.”

As he tells it, Mr. Van Sickle has sought only to find beauty in the “everyday common things that people do.” But as an artist who mingled with the Village bohemians of the 1960s, he often came across some extraordinary scenes. At a party in the East Village, he photographed Allen Ginsberg as he read his poem “Howl.” At another party, he met Yayoi Kusama, who invited him to photograph her at her studio. While working on a documentary film about pop artists, he photographed Andy Warhol at The Factory.

Early on, Mr. Van Sickle’s artistic career showed signs of promise. In 1958, he had a one-man show at the Image Gallery. The next year, Edward Steichen bought two of his photographs, and the Metropolitan Museum of Art displayed another in its “Photography in the Fine Arts” exhibit.

In the years since, however, wide recognition has eluded him. He pursued other passions — he became a tai chi instructor in 1972 — and climbed the ladder in the film world until he became a director of photography. All the while, he said, he continued making photos solely for the love of it.

“I wanted to have a bigger audience, but it was very difficult,” he said. “I always poured money into photography, but never made anything back.”

That began to change in 2015, when he met Elana Rubinfeld, an independent art consultant. Following a tip from an acquaintance, she visited Mr. Van Sickle at his apartment and discovered a vast archive that had largely never seen the light of day.

“Because he was showing his work early on in his career, I think he got burned pretty easily by the industry. He took himself out of exhibiting and promoting his own work, but he continued to make photos all these years. He didn’t think about the audience. He was just capturing his experience on the fringe of bohemian life,” she said. “When I saw his work, I just had to share it and put it out there in any way possible.”

Ms. Rubinfeld started an art agency and took Mr. Van Sickle on as her first client. She made him a website, helped him sell some prints and encouraged him to put together images for his first book, “Ken Van Sickle: Photography 1954-2009,” which Damiani will publish in February.

Mr. Van Sickle has more photographs he’d like to show the world and more books he’d like to make. In the meantime, he said, he’s happy to simply continue working on his lifelong craft.

“I just want to keep doing what I’m doing,” he said.