HEAD OF THE HARBOR, N.Y. — Harlan and Olivia Fischer discovered fine art in the early 1990s, an unexpected consequence of Mr. Fischer’s Jeep having been struck by a drunken driver and totaled.

Although his injuries were minor, Mr. Fischer, a financial planner, said the crash required extensive rehab and got him thinking. “I realized that, had I been killed, I wouldn’t have left much of an imprint” outside of business, he said.

After the accident, the Fischers, of Head of the Harbor, N.Y., threw themselves into volunteer work for organizations including the Smithtown Township Arts Council. Mrs. Fischer retired early from her job in human resources at the Veterans Administration and devoted more time to these pursuits. By the mid-90s they were regularly purchasing works by painters they met through the arts council, including Agnes de Bethune and John Dorish.

They still buy oils and acrylics in styles ranging from Abstract Expressionism to photorealism. But one day in 1995, on a visit to a friend in nearby Nissequogue who’d remodeled his garage around his growing glass collection, they found a new focus. “The minute the two of us saw his glass art, we thought it was great,” Mrs. Fischer said.

The Fischers bought four or five more pieces over the next several weeks and didn’t stop there. In 2005, having run out of space, they commissioned a 2,000-square-foot addition to their contemporary home. 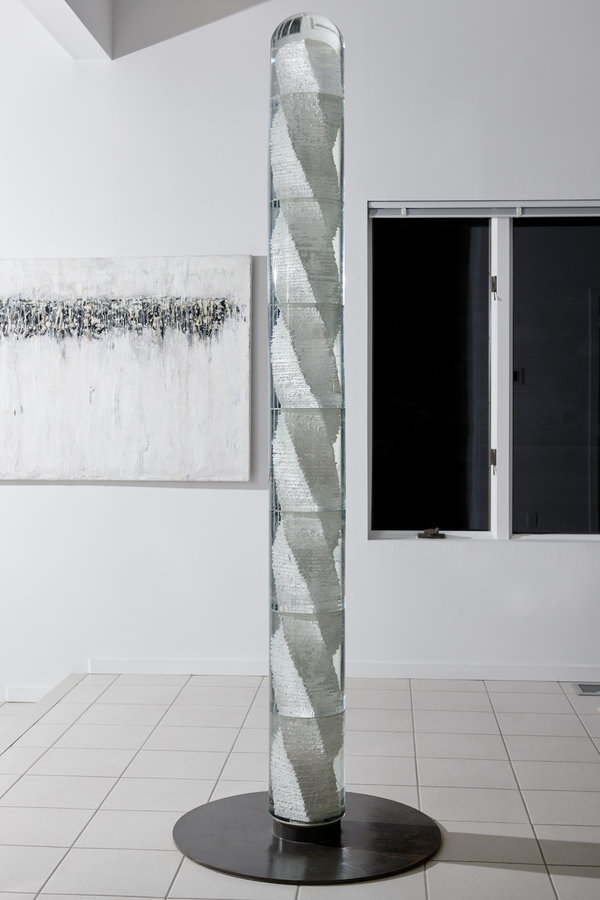 The Fischers, who have no children, say they plan to give their collection to a museum someday, possibly a local one — “So we can see it when we want to,” Mr. Fischer said. In the meantime, Mrs. Fischer said, they continue to acquire pieces with a goal of upgrading their glass objects.

Mr. Fischer is a board member of various glass collectors’ groups, and the couple are founding members of the Ennion Society of benefactors at the Corning Museum of Glass.

They discussed their collection in a visit to their home on Long Island’s North Shore. Here are edited excerpts from the conversation.

This is quite a collection! How have you built it?

HARLAN FISCHER I find I either like a piece or I don’t. Generally I like pieces that are scaled large and display intense color. When Olivia and I started collecting glass, the feeling was similar to how I felt in high school when I discovered jazz. I heard a record of John Coltrane playing “My Favorite Things.” Epiphany!

OLIVIA FISCHER One of my favorites is “Aver 4,” by Nicole Chesney. To me it is bold and vibrant, at the same time ethereal with mysterious depth.

How do you acquire most of the art here?

MRS. FISCHER Most of our collection comes from galleries. We go to the SOFA [Sculpture Objects Functional Art and Design] exhibition almost every year. And a few pieces are purchased from friends.

MR. FISCHER We try not to walk into galleries as strangers. We usually acquire works by established artists. We listen to suggestions, too.

It must be challenging to move some of these pieces, yet you do it.

MR. FISCHER When we built the addition, we needed to move “Spiral of Life” [by Ivana Houserova] to a place between our dining room and our new gallery. We contacted Jitka Pokorna, who owned the gallery in Prague where we bought the piece. Coincidentally, she and her staff were about to fly to the SOFA exhibition in Chicago and were stopping over in Newark. We had a car pick them up at Newark and bring them here. That afternoon the four of them disassembled the piece, moved it, and reassembled it. It weighs at least 450 pounds.

How much does such a housecall cost?

MR. FISCHER They didn’t charge me anything. We had gotten several pieces from Jitka. Actually we got more pieces from her than anybody. When they were here, I asked what they wanted to eat and they all said “pizza” in unison. I guess the only word they all knew in English was pizza.

Did you get them pizza?

MR. FISCHER Yeah, I had pies delivered from a local place. They all chowed down. They stayed overnight and flew out to Chicago the next day.

12/31/2018 Entertainment Comments Off on A Couple With a Glass-Filled House (No Stones, Please)
Recent Posts