Some good news: Employees are moving back into the Ford Foundation headquarters, between 42nd and 43rd Streets, a stone’s throw from the United Nations.

Designed by Kevin Roche and John Dinkeloo, the heirs to Eero Saarinen’s practice, Ford reimagined corporate modernism in the mid-1960s. Offices wrapped around a soaring atrium garden. Light poured through a saw-tooth skylight and glass curtain walls fixed in place by grids of rusting Corten steel.

Clad in gray-pink Dakota granite, the refined, muscular building conveyed an uncanny combination of heaviness and delicacy, solidity and transparency.

Its garden, by Dan Kiley, was something new then, a slice of Eden in a city that seemed to many residents like it was going to hell. Writing in Life magazine at the time, the author William Zinsser called Ford “an act of faith in the midst of ruin.” 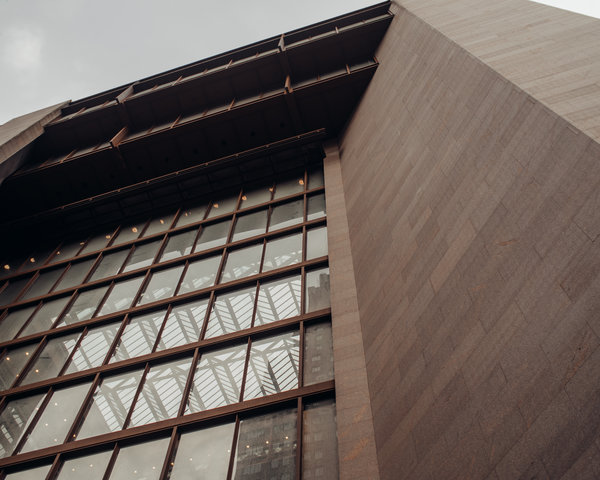 With Warren Platner’s luxe furnishings and Sheila Hicks’s abstract tapestries, the project was a Mad Men-era version of a Gesamtkunstwerk, a complete work of art. Ford’s executives gazed across the bougainvillea at one another and outward, onto a world awaiting their largess. The architecture, mixing private offices with the public garden, aimed to improve the daily lives of workers and to give New York a building that lent form to an Emersonian ideal.

That ideal involved civic uplift. The architecture was meant to be humane.

After half a century, the building remained a gem but needed an upgrade. City officials gave the foundation until 2019 to remove asbestos, fix the sprinklers and make the site wheelchair accessible. The foundation’s president, Darren Walker, saw the opportunity to nudge the headquarters, in other ways as well, into the 21st century.

And so Ford has now downsized its footprint, making room for other foundations. There’s a new public art gallery, a touch-and-feel garden in the atrium for the blind; and Mr. Walker converted his own office into a pair of conference rooms that can be used by outside nonprofits.

The building is rechristened the Ford Foundation Center for Social Justice.

More than 1,500 pieces of Platner’s furniture have been restored, decades of varnish painstakingly stripped from paving tiles in the atrium to reveal their original dusky colors. Custom window latches, brass rails and leather-lined parapets are all shined, buffed and oiled.

I was reminded of Marcel Breuer’s Whitney Museum and Louis I. Kahn’s Yale Center for British Art when I saw the newly lighted, bush-hammered concrete stairwells tucked into the fins that jut from the 42nd Street facade.

The new Ford is a virtual reliquary of midcentury detail.

Not everyone will be popping corks, though. Preservationists protested changes, especially to the garden when the project came up for review before the Landmarks Commission. I suspect they will add the restoration to a growing list of grievances.

There was the unannounced bulldozing last year of the fountain at the base of the Citicorp building by the landscape architect Hideo Sasaki.

There was the destruction of the lobby in Philip Johnson’s AT&T Building, the so-called Chippendale tower, on Madison Avenue at 55th Street. The building’s owners quietly gutted the lobby to make room for new elevators before the site could be designated a landmark earlier this year.

And there’s the pending demolition of 270 Park Avenue, the former Union Carbide building, by Skidmore, Owings and Merrill, for which Natalie de Blois was the guiding architect. Headquarters now for Chase, the Landmarks Commission didn’t deem it worthy of designation when the area was about to be rezoned. It will make way for a supertall by Norman Foster. There seems almost nothing Mr. Foster won’t do these days.

Excuses abound, of course. It goes without saying that change can be a civilizing process. And I don’t want to get entangled in the arguments over jobs, the virtues of density, the baffling antipathy of a substantial portion of the general public toward modernism. Never mind the Not-In-My-Backyard culture of resistance, which is nothing new.

With its myth of endless progress, America has always embraced obsolescence and presumed the perfectibility of the future. New York is the shining city on the hill. But increasingly, its residents distrust what comes next, distrust leadership, distrust the neoliberal policies that favor developers.

Preservation acts like a bottle tossed into the ocean, a fragile bulwark against oblivion. “There is no salvaging the hotel ballroom where you held your wedding reception; there is no rescuing the Sears where you worked your first job,” as the architecture writer Kate Wagner eloquently phrased it in “The Baffler.” “The loss is the same because architecture, high or common, forms the backdrop of everyday life.”

It’s in this context, I think, that Ford’s renovation functions as a Rorschach test.

Among the contested changes, a couple of planters have been removed from the atrium garden and a small, discreet lift installed to provide wheelchair access. The reflecting pool, where people tossed pennies, is now complemented by a tiny weir whose tinkle of babbling water adds a sound feature for the visually impaired.

What had been a combination of dense clusters of greenery in Kiley’s original plan feels more like one lush space in the sturdy replanting by Raymond Jungles, the Miami-based landscape architect Ford hired.

Gensler, the architectural giant, which oversaw the renovation, added the art gallery, for exhibitions related to social justice. Offices that had been rabbit warrens have had walls removed, clearing views straight through the site, between north and south. The new, pristine configuration required rearranging some lighting fixtures. These changes, too, while improving conditions for some Ford workers and extending the exalted transparency of Roche and Dinkeloo’s architecture, have troubled preservationists.

Ford opened in the midst of the Vietnam War. In his 1969 book on American architecture, the historian Vincent Scully described Ford’s “military scale on the street.” Michael Sorkin, the architect and critic, writing a couple of decades later, pointed out that the foundation’s president in 1967, the first to occupy the building, was McGeorge Bundy, fresh from the White House, where he had helped direct the war.

American policy in Vietnam envisioned “strategic hamlets” or walled villages, “safe from the darkening influences of the surrounding Otherness,” Mr. Sorkin noted. He saw Ford’s immaculate headquarters, with its garden in a fortress vibe, as a kind of strategic hamlet.

Mr. Roche saw it as a place where workers could observe one another across the garden and feel a sense of community. The building was an early stab at green architecture, collecting rainwater, exploiting natural light to reduce the need for electricity.

In movies like “Playtime,” from 1967, the Russian-born French filmmaker Jacques Tati ridiculed the effects of modern architecture on the French equivalent of New York’s midtown employees, trapped in their glass offices, counting down the minutes until the 5:21 to Larchmont.

Earlier landmarks like the Bradbury Building in Los Angeles or Frank Lloyd Wright’s (demolished) Larkin Building in Buffalo had been designed around interior courts. But Ford’s garden was different, with its forest and granite columns, rising like redwoods, supporting tiered offices that conjured up tree canopies.

The president’s suite was the world’s most spectacular tree house.

Getting to it involved an ingenious architectural choreography of intimidation. Supplicants arriving for an audience with the president disembarked a leather-lined elevator at the building’s 10th floor. Crossing a vertiginous balcony, levitated high above the garden, they negotiated the third of three separate reception areas, which in turn gave onto an enormous secretarial antechamber.

If deemed worthy, they were finally admitted to the sanctum sanctorum, an office large enough to accommodate 40 people.

Now the president’s suite is chopped into that pair of conference rooms, named after Wilma Mankiller, the former Cherokee Nation chief, and Fannie Lou Hamer, the American-African civil rights and women’s right leader.

This was Mr. Walker’s larger goal. Another new conference room, dedicated to Nelson Mandela, features some of Mandela’s own drawings along with a portrait of Mandela by Philip Kumah. They’re part of Ford’s contemporary art collection, which decorates the corridors, office walls and columns of the building, adding bright colors, messaging and faces to the existing palette of browns, beige, white and gray.

Preservation is not just about bricks and mortar, in the end. It’s also about cultivating a public to feel invested enough to keep something. Something that’s meaningful to daily life. By opening up the building, Ford’s renovation serves the foundation’s social justice mandate.

A half-century old, the new Ford remains a singular gift to the city.

The building is at 320 East 43rd Street, between Second Avenue and Tudor City Place, in Manhattan. The garden will be open to the public starting in mid-December, pending an expected city permit; the art gallery will have its first exhibition in March. They can be reached from the 43rd Street entrance or from 42nd Street, via the garden entrance between Second and First Avenues. More information: fordfoundation.org. 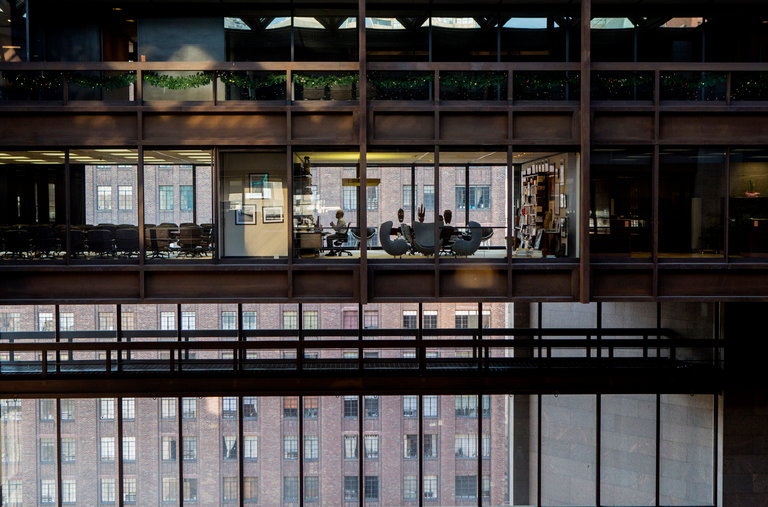 Michael Kimmelman is the architecture critic. He was previously The Times’s chief art critic and, based in Berlin, created the Abroad column, covering cultural and political affairs across Europe and the Middle East. @kimmelman • Facebook