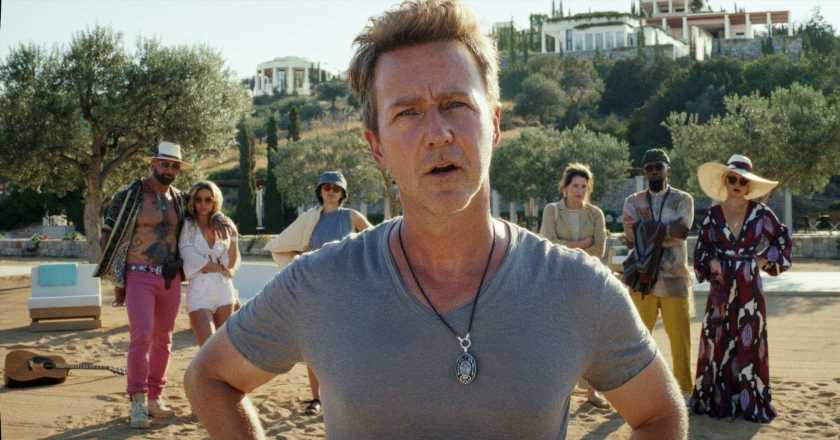 It seems like everyone watched the Knives Out sequel over the Christmas period. Here are the best (spoiler-free) lessons we learned from it.

After three years of waiting, Knives Out sequel Glass Onion is finally here – and it’s just as camp, crazy and kinda-political as we could’ve dreamed.

The whodunnit is set on a beautiful Greek island and, as ever, there’s a twist or two. Glass Onion has been a must-watch over the Christmas period, and we’ve pulled together the top takeaways from the star-studded affair. No spoilers, of course.

One thing is for sure: after years of Bond tuxedos, Daniel Craig is having the most fun EVER with his character Benoit Blanc’s sartorial choices in Glass Onion.

From his striped bathing suit to his inspired and assorted range of neckerchiefs and those linen suit trousers, we are 100% here for each lewk.

While Rian Johnson reportedly wrote Glass Onion in 2020, it highlights some very current problems with certain tech billionaries in 2022.

Many fans have asked if Ed Norton’s “idiot billionaire” character Miles Bron is based on Elon Musk, but others have pointed out that Bron could be a parody of any of the wealthy, out-of-touch types and how they manage to “fail upwards”.

Either way, just like with the original Knives Out, Johnson nailed the pure ridiculousness and ethical problems around such wealth, and what others will do to access that kind of influence.

3. It’s set during Covid, which subtly defines each character

Nothing like placing rich, selfish people in the middle of a pandemic to show how much (or little) they care about others. Johnson clearly uses this context to throw shade at various celebrities who misbehaved during Covid, as well as using it to show us the characters’ true colours on screen.

While Blanc and other characters turn up to the island retreat in Covid-appropriate face covers, it is revealed early on that others have been throwing parties during lockdown. Sound familiar?

4. It’s so star-studded, the “hourly dong” is done by a celebrity

This one is for the eagle-eyed (and eared).

There is an hourly “dong” that goes off during Glass Onion – which was recorded by none other than Joseph Gordon-Levitt.

Johnson revealed in an interview that it was meant to be a “gong”, in true island retreat fashion, but Gordon-Levitt called it a “dong” and the name stuck, surprisingly.

As if the revelation that Blanc is – in fact – gay wasn’t enough, we’re treated to Hugh Grant opening the door to Blanc’s apartment very early on in the film.

He’s very clearly into his sourdough starters (it’s 2020 after all), and we’re obsessed with Blanc shacking up with a cute baking obsessive..

6. While amusing, it highlights a very real problem

Much like the first Knives Out film, Glass Onion spotlights the true toxicity of wealth and influence.

More specifically, it looks at the ease at which “mediocre white dudes” maintain their power, a fact we know all to well and witness way too often.

The film has definitely divided opinion, with some claiming to not enjoy it. Fans have suggested any discomfort audience members feel may be due to Glass Onion’s “perfect encapsulation of the problem”.