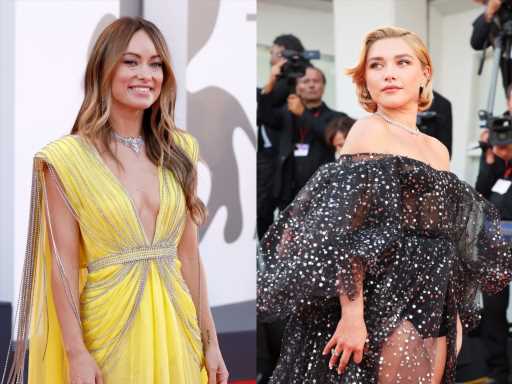 What started as a woman-directed, sexy thriller movie has quickly turned into a media circus. If you’ve been following the news, you know that Don’t Worry Darling has been in the media a lot lately. But it hasn’t been in the media for the film; it’s been in the media for the insane level of drama that keeps unfolding. Between the feud with Florence Pugh and Olivia Wilde, the rumored spitting incident between Harry Styles and Chris Pine, and the whole Shia LaBeouf fiasco; people are itching to see what could possibly come next before the film premieres in theaters on Sept 23.

For those that don’t know, Don’t Worry Darling is a thriller following a young couple in the 1950s who move into a seemingly perfect town. But things aren’t always as they seem, as Pugh’s character Alice quickly finds out. Starring Pugh, Styles, and Pine and directed by Wilde, this film has been one of the most anticipated films of this year.

Ahead of the world premiere in late Sept, Don’t Worry Darling is one of the few films being premiered at the 79th Venice Film Festival, along with highly-anticipated films like The Whale, On The Fringe, and Dead For A Dollar, to name a few.

It’s safe to say, all eyes have been on the Don’t Worry Darling cast, and no one could look away when the whole cast stepped out on the red carpet on Sept. 5 for the Venice Film Festival.

See our favorite moments from the Don’t Worry Darling premiere below!

Olivia Wilde’s stylist and good friend Karla Welch uploaded a few stunning, blurry pictures of Wilde looking like she’s having the time of her life backstage!

Florence Pugh made a rare Instagram post about her time at the premiere, specifically how grateful she is that she could share the moment with her grandma. “A few months ago my Granzo Pat said she hadn’t bothered renewing her passport because she didn’t think she’d be doing too much traveling the older she gets. She is such an adventurer that it saddened us all that she was thinking that way. I asked her, ‘but granny, what about being on the red carpet at my premiere in Venice? What about if Bear Grylls actually does invite you to run wild with him for an episode?’”

She continued, saying, “After some thought, she started the process. At the end of my walk down that carpet, I saw my granny taking pictures on her phone. I hugged her and asked if she would like to stand with me for a picture, her eyes lit up whilst also saying ‘oh they don’t want to see me..’ I assured her they did.”

Nick Kroll uploaded a bunch of super-sweet photos from the premiere, including one of him and Chris Pine taking snapshots of Florence Pugh and when he and Harry Styles kissed!