Our guide to pop and rock shows and the best of live jazz happening this weekend and in the week ahead.

THE BLIND BOYS OF ALABAMA CHRISTMAS SHOW at City Winery (Nov. 29, 8 p.m.). Technically it’s still November, but a set’s worth of Christmas music from the inimitable Blind Boys of Alabama is about as festive as it gets — especially for blues and gospel fans. The vocal quartet is down to one original member, Jimmy Carter, which is particularly remarkable given that the group first sang together in the mid-1940s. Their sound remains rich and timeless — which suits the holiday hymns and classics for which they won a Grammy in 2003 with “Go Tell It on the Mountain.”
212-608-0555, citywinery.com

BOB DYLAN at the Beacon Theater (Nov. 23-24, 26-27, 29-30 and Dec. 1, 8 p.m.). The 77-year-old impresario of American song is offering a week’s worth of shows as part of what for the past 30 years some journalists have termed his Never Ending Tour — a label Dylan himself flatly rejects. Dylan’s external gruffness masks a man whose performances remain as heartfelt as they were more than 50 years ago, when he was just another guy with a guitar bumming around Greenwich Village. The shows on Friday and Dec. 1 are sold out, but tickets are available through resellers.
212-465-6000, beacontheatre.com

PROTOMARTYR AND PREOCCUPATIONS at Warsaw (Nov. 28, 8 p.m.). Woe to the sound engineer who has to set up the distortion pedals for this pair of post-punk bands, stopping in Brooklyn during their co-headlining national tour. Both favor lush, chaotic, rough-around-the-edges rock grounded in genuinely catchy songwriting. Protomartyr prefer emphatic talk-singing over arrangements that are mostly spare with the occasional burst of metal-inflected virtuosity, while Preoccupations lean toward New Wave, with many-layered synths sometimes taking the place of endlessly reverberating guitars.
212-777-6800, mercuryeastpresents.com/warsawconcerts

PUSHA T at Irving Plaza (Nov. 25-26, 7 p.m.). Eight years ago, a showstopping verse on Kanye West’s “Runaway” helped mainstream pop fans see what hip-hop nerds had already known for almost a decade — namely, that Pusha T was among the genre’s most incisive lyricists. Today he’s the one gunning for a Grammy with his latest album, “Daytona,” and stoking the flame of an ongoing beef with Drake (expect more than a little smack talk during his New York sets). Both shows are sold out, but tickets are available through the resale market.
212-777-6817, irvingplaza.com

TRAVIS SCOTT at Madison Square Garden (Nov. 27-28, 7:30 p.m.). This Houston-based producer and M.C. is known for being one of the most energetic and spontaneous performers in rap. (His shows inspire mosh pits and stage dives.) His latest album, “Astroworld,” knocked Drake’s “Scorpion” out of its five-week hold on No. 1 when it arrived in August. Yet Drake’s verse on “Sicko Mode” has helped it become a hit, fueling memes, sports celebrations and the song’s rise to No. 2 on the Billboard Hot 100.
212-465-6741, msg.com

THOM YORKE at Kings Theater (Nov. 26-27, 8 p.m.). Perhaps only Radiohead’s frontman could swing two nights of experimental electronic music at this massive theater in Flatbush, Brooklyn, but at least it’s a more intimate space than the seminal British alt-rock band’s usual arenas. He’ll be joined by Nigel Godrich, a Radiohead producer and Yorke’s Atoms for Peace bandmate, as well as the audiovisual artist Tarik Barri. Yorke is currently working on a solo album with Godrich, which is due out next year, so at these dates he might preview new music or perform selections from his first feature-length soundtrack for the 2018 horror film “Suspiria.” Both shows are sold out, but tickets are available through resellers.
718-856-5464, kingstheatre.com
NATALIE WEINER 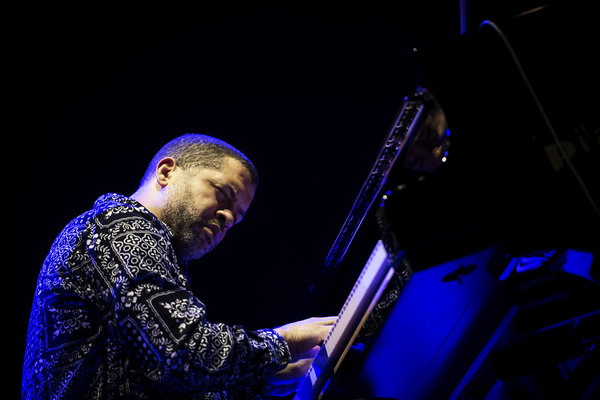 MARY HALVORSON AND JOE MORRIS at the Jazz Gallery (Nov. 28, 7:30 and 9:30 p.m.). Halvorson and Morris are two guitarists whose sound you can recognize immediately. Both give off the feeling that their instrument is a rough and dangerous thing, a kind of electric reactor, though they play quite differently: Halvorson in a corkscrewing tangle, Morris in sharply percussive flecks and bites. This show marks the release of their new album, “Traversing Orbits,” on the Rogue Art label (it’s available only on CD).
646-494-3625, jazzgallery.nyc

FRANK KIMBROUGH at Jazz Standard (Nov. 27-28, 7:30 and 9:30 p.m.). There’s been a spate of activity around Thelonious Monk’s legacy over the past two years; it’s impossible to keep track of everything. But one impressive project that bears accounting is Kimbrough’s new album, a six-disc collection on which he and his band cover every piece in Monk’s songbook. Kimbrough’s treatments amount to a devoted and respectful homage, though they’re laden with moments of subtle reinvention. The record, “Monk’s Dreams,” is out on Friday. He appears here with the members of his quartet: Scott Robinson on saxophones and reeds, Rufus Reid on bass and Billy Drummond on drums.
212-576-2232, jazzstandard.com

JASON MORAN AND THE BANDWAGON at the Village Vanguard (through Nov. 25, 8:30 and 10:30 p.m.). Moran, a pre-eminent pianist, has been playing Thanksgiving week at the Vanguard with his trio, the Bandwagon, for the past six years. These musicians have been together for three times that long, and even when playing some of their most well-worn material, they manage to embody a blend of comfort and restless ingenuity. Recently Moran has been exploring the work and legacy of James Reese Europe, an influential composer and bandleader in the early years of jazz whose military band, known as the Harlem Hellfighters, became a cause célèbre in Europe and at home. Here the Bandwagon will play Moran’s postmodern reconstructions of Europe’s music.
212-255-4037, villagevanguard.com

ANGELICA SANCHEZ at the Stone (Nov. 27-Dec. 1, 8:30 p.m.). Sanchez’s aggressiveness as an improviser and an experimentalist is matched by the sensitivity and composure of her touch at the piano. She is in residence this coming week at the Stone, where she performs in a different scenario each night. On Tuesday and Wednesday she appears in two different trios: Sam Newsome on saxophone and Andrew Cyrille on drums the first night; Andrew Bishop on saxophone and Tom Rainey on drums the second. On Thursday she pairs up with the drummer Pheeroan Aklaff. She’s with the guitarist Omar Tamez and the drummer Ramon Lopez on Nov. 30, then she leads a 17-person big band to close out the run on Dec. 1.
thestonenyc.com

JOHN SCOFIELD QUARTET at the Blue Note (Nov. 27-Dec. 2, 8 and 10:30 p.m.). With an acrid, lightly distorted sound and a habit of subtly stirring psychedelia and country rock into his dexterous improvising, Scofield has been one of jazz’s leading guitarists since the 1970s. His most recent album, “Combo 66,” is a triumphant romp; he appears here in the quartet from that record, featuring Gerald Clayton on piano and organ, Vicente Archer on bass and Bill Stewart on drums.
212-475-8592, bluenote.net

SARA SERPA at National Sawdust (Nov. 28, 7 p.m.). A singer whose coolly drifting vocals never quite feel disembodied or out of reach, Serpa has recently been working more directly with political and historical topics. Here she debuts “Intimate Strangers,” a project undertaken with the Nigerian writer Emmanuel Iduma. The piece uses a combination of musical abstraction and lyrical content to interrogate themes of migration, displacement, citizenship and belonging. Iduma and Serpa, who hails from Portugal, will appear here with two other vocalists, Sofía Rei and Aubrey Johnson, as well as Matt Mitchell on piano and Qasim Naqvi on the modular synthesizer.
646-779-8455, nationalsawdust.org

TERRY WALDO SEXTET at Dizzy’s Club Coca-Cola (Nov. 26, 7:30 and 9:30 p.m.). Though the day of Scott Joplin’s birth is not known for certain, the most generally agreed-upon date is Nov. 24, 1868, meaning that Saturday would be the ragtime pioneer’s 150th birthday. In commemoration, the virtuoso pianist Terry Waldo — who plays traditional repertoire with a kind of playful reverence — will lead a sextet through some of Joplin’s music. The ensemble includes the trumpeter Mike Davis, the clarinetist and saxophonist Evan Arntzen, the trombonist Jim Fryer, the banjoist and guitarist Jerron Paxton, the bassist Brian Nalepka and the drummer Jay Lepley. The vocalist Tamar Korn and the pianist Joshua Rifkin will join in on certain tunes.
212-258-9595, jazz.org/dizzys
GIOVANNI RUSSONELLO

ICEAGE at Music Hall of Williamsburg (Nov. 25, 8 p.m.) and Elsewhere (Nov. 27, 8 p.m.). If you missed Nick Cave at Barclays Center a few weeks back — even if you didn’t — check out one of his heirs apparent, who are playing in Brooklyn not just once, but twice. On their fourth album “Beyondless,” released in May, these fresh-faced but already-veteran Danes deliver a sound that is as full of longing as it is of swagger. When you’re feeling somewhat lovelorn yet romantic, wandering the city in search of a bit of dangerous fun, your mood will be well served if you have songs like “Catch It” and the title track on your mental jukebox.
musichallofwilliamsburg.com
elsewherebrooklyn.com
DANIELLE DOWLING

11/22/2018 Entertainment Comments Off on 14 Pop, Rock and Jazz Concerts to Check Out in N.Y.C. This Weekend
Recent Posts