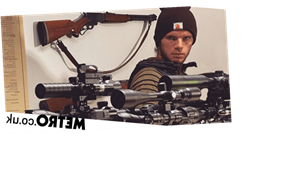 YouTuber WhistlinDiesel has had a lucky escape after being accidentally shot in the head by a ricocheting bullet.

The 22-year-old was testing out a long arm rifle to see if bullets would pierce steel plates on the ground.

However, one of his shots hit a plate at the wrong angle, causing a .50 calibre bullet to ricochet up and graze his forehead.

On his Instagram page, WhistlinDiesel – real name Cody Detwiler – shared a picture of his face covered in blood as he sat in the back of a car.

He wrote: ‘Not sure how I’m alive rn…… love you all and thanks for all of you.

‘I got hit with a .50 cal bullet ricochet from 4ft away right into my forehead. I’m ok they’re just doing some scans to make sure I don’t have swelling other than the 2” lump on my forehead and the copper jacket under my skin.’

WhistlinDiesel added in the comments: ‘I literally know what it feels to get hit with a .50 cal…. in the head……’

He later shared a picture from hospital, telling his 940,000 Instagram followers that he had a CT scan which showed he had not caused damage to his skull.

The YouTuber wrote: ’You look at life a little differently when you pull the trigger of your .50 cal and your head shakes and  starts dripping down past your eyes. I put my hand up and just felt metal sticking out and about passed out.

‘Got a ct scan to be safe and they say my skull isn’t cracked soo…. back to target practicing!!! 😀

‘For anyone wondering I was shooting steel plates from 4ft away like a boss to see how many it would go through. It went through 2……’

He joked: ‘Really dodged a bullet with this one’ and quoted Monty Python and the Holy Grail, commenting: ‘TIS BUT A SCRATCH.’

The photo from hospital showed a grisly wound on the star’s forehead, above his right eyebrow, and WhistlinDiesel also shared a picture of the enormous casing and the crumpled bullet that hit him.

Fans wished WhistlinDiesel well as they commented on his lucky escape, with one joking that it was time for him to buy a lottery ticket.

Car enthusiast WhistlinDiesel has 1.7 million subscribers on his YouTube channel, on which he performs stunts with cars and guns.

His latest video, watched by 2.5 million people, showed him destroying his grandfather’s truck.

He lives in Indiana, where it is generally legal to discharge firearms on one’s own property if located outside the city limits and with an adequate backstop.