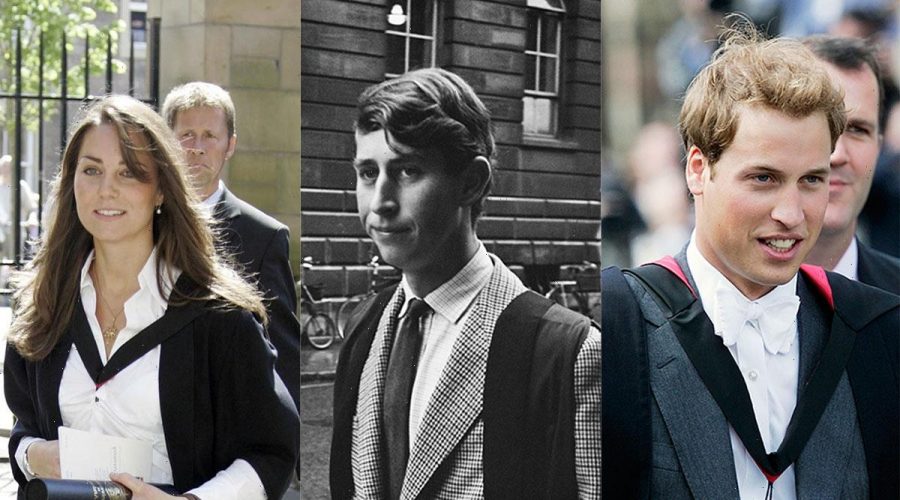 From Eton College, St Andrew’s and Cambridge University, the royals have had an elite education. Did you know that Prince William attended St Andrew’s University after a gap year in Chile and that his brother Prince Harry decided to go to Sandhurst instead of university?

And are you aware that their cousin Princess Eugenie became in 2012 the member of the family with the best academic qualifications?

As students across the UK receive their A-Level and GCSE results this week, HELLO! has taken a look at where all the royals have studied…

Her Majesty and her sister Princess Margaret were educated at home by Marion Crawford. Neither have any formal qualifications, though the Queen is fluent in French. They were the last of the royal family to be educated at home.

WATCH: Princess Charlotte arrives for her first day at school

The Duke and Duchess of Cambridge’s youngest child, Prince Louis, began his education in the same week as his third birthday in April 2021.

The royal has followed in his sister Princess Charlotte’s footsteps and attends Willcocks Nursery School in Kensington.

A sweet photograph, taken by mum Kate, showed Louis posing proudly with a red balance bike, and carrying a navy rucksack as he headed off for his first day.

The eldest son of the Duke and Duchess of Cambridge started attending Westacre Montessori School Nursery in Norfolk in 2016, before moving on to Thomas’s Battersea, where he will be heading into Year 4 in September 2021.

Kate and William famously met at the University of St Andrews, where Kate read history of art and left with a Master’s degree. Before university, the Duchess of Cambridge boarded at Marlborough College, a co-educational independent boarding school in Wiltshire.

MORE: 16 adorable photos of the royals on their first day at school

After attending London’s Jane Mynors’ nursery school and Ludgrove School as a child, the Prince then went on to study at Eton College in 1995, becoming the first senior member of royal family to go there.

William graduated with A-levels in geography, biology and history of art alongside 12 GCSEs. The heir to the throne also attended The University of St Andrews in Scotland, after taking a gap year, meaning he graduated in 2005 with a 2:1 in geography.

Like his brother, he graduated from Eton, although he chose not to go to university but to complete ten months of officer commissioning training at Royal Military Academy Sandhurst.

Harry served in the Army for ten years, rising to the rank of Captain and undertaking two tours of Afghanistan. He continues to work in support of his fellow servicemen, promoting support for wounded men and women as they adapt to life post-injury.

MORE: 29 celebrities who attended same swanky schools as the royals

The former actress was educated at private schools before attending Immaculate Heart High School in Los Angeles. Meghan received a bachelor’s degree in Theatre and International Studies from Northwestern University School of Communication. Alongside her degree, Meghan completed an internship at the American embassy in Buenos Aires and studied for one term in Spain.

The royal then studied at Goldsmiths, University of London and graduated with a 2:1 degree in history and the history of ideas.

Princess Eugenie  began her schooling at Winkfield Montessori from 1992 to 1993. From there, she joined her sister at Upton House School in Windsor. She also attended Coworth Park School and then St George’s School, near Windsor Castle until 2003. For the next five years, Eugenie boarded at Marlborough College in Wiltshire, where she achieved two As and a B in art, English Literature and history of art.

Eugenie studied at Newcastle University graduating in 2012 with a 2:1 degree in English literature, history of art and politics. She is said to have the best academic grades among the current British royals.

The Queen’s eldest son then went to Gordonstoun, a Scottish public school where he took his GCE O-levels at age sixteen and passed six of them.

The Prince of Wales graduated with a 2:2 degree in 1970, and marked the first university degree achieved by a British royal or heir to the throne.

The Queen’s youngest son attended Gordonstoun, enrolled for two terms at the Wanganui Collegiate School in Wanganui, New Zealand where he served as a house tutor and oversaw drama classes. In 1986 the royal received a BA degree from Jesus College, Cambridge.

The Queen’s cousin Prince Richard is a full-time working member of the royal family but he is also a trained architect. The Duke started his early education at home, before going to school at Wellesley House, Broadstairs and then Eton College.

The royal family’s website states: “In 1963, Prince Richard went to Magdalene College, Cambridge, where he read architecture. He graduated in 1966, having completed three years of his five-year architectural course, and then joined the (then) Offices Development Group of the Ministry of Public Building and Works for his year’s practical work, returning to Cambridge in 1967.

“In June 1969, he passed both parts of his Diploma in Architecture at the university. After completing his training, he went into practice as a partner in a firm of London architects.”

Prince Richard had planned a full-time career in architecture but after the death of his elder brother Prince William of Gloucester in 1972, he became his father’s heir and took on increased royal duties.