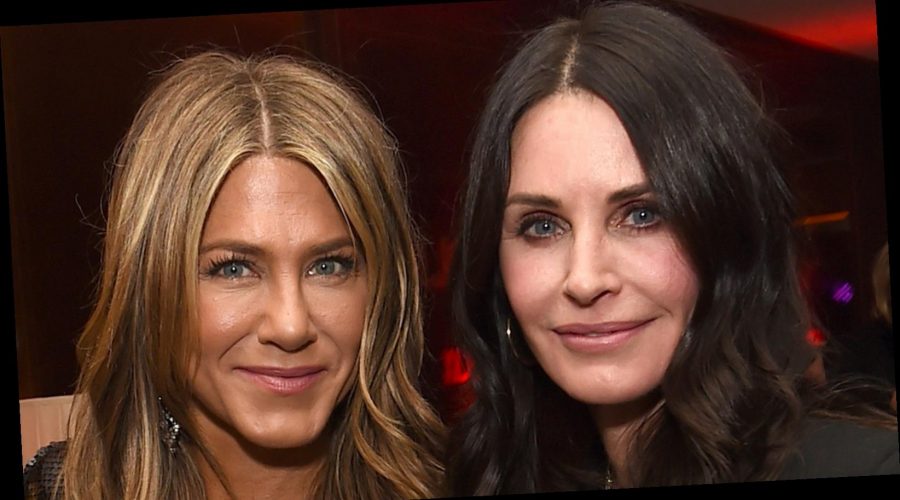 Most Friends fans know that Jennifer Aniston and Courteney Cox played BFFs on their famed sitcom, and are also thick as thieves in real life. The famous duo met on the set of the show, according to PopSugar. The outlet notes the friends actually dated the same guy early on in their friendship. That’s right — Counting Crows crooner Adam Duritz went out with both Aniston and Cox (via Ranker). In Style notes the singer’s 1995 relationship with the former actress was “brief.” Meanwhile, Duritz and Cox dated about two years later, according to Cheat Sheet.

Clearly their romantic involvement with Duritz did not come between Aniston and Cox, as the leading ladies are still dear friends to this day. In fact, the friends have seen each other through marriages — in which they served as one another’s maids of honor (via Cheat Sheet) — and divorces, with Aniston splitting from her famous first husband Brad Pitt in 2005, per Insider, and Cox’s marriage to David Arquette ending in divorce in 2013 (via Yahoo!). Aniston would go on to say “I do” and then “I don’t” to actor Justin Theroux (via Harper’s Bazaar).

Meanwhile, Cox has very openly struggled with infertility, telling Busy Philipps in 2019, “I had a lot of miscarriages” (via Today ). She is now a mom to a 16-year-old daughter, Coco, and guess who is the child’s godmother (via People)? That’s right — Aniston!

Indeed, through personal and professional ups and downs, the two Friends stars have been there for one another.

E! Online notes the two stars got along swimmingly while filming Friends and still have a very strong bond to this day. “We fell in love with each other and wanted to hang out,” Aniston said previously. For her part, Cox said about her bestie, “We just have fun, we laugh, we’re inseparable and it’s great.”

Meanwhile, you’ll see the star BFFs on red carpets, sure, but you can also catch them on one another’s Instagrams. Which means, yes, they actually hang out together, just like in our fantasies of what the former co-stars do in their spare time. In fact, in a 2021 post wishing Aniston a happy birthday, Cox shared a gallery of images of the two over the years, along with the super-sweet caption, “Happy Birthday Jenny Louise! We’ve known each other so long I don’t even remember why I call you that. I love you !”

And yes, the friends even have sleepovers, with Aniston saying in 2019, “There’s absolutely no judgement in Court. You’ll never feel scolded. She’s extremely fair, ridiculously loyal and fiercely loving. I’ve slept in her guest bedroom a lot. Without giving away too much of my private stuff, all I can say is she’s been there for me through thick and thin” (via Hello!).

The friends that vacation (and reunion) together, stay together

Not only do Aniston and Cox enjoy hang time at their homes, but the famous friends also vacation together, with Mexico being a favorite spot (via Hollywood Life). The stars spent time away from it all in the exotic locale in 2013 and again in 2019 (via PopSugar). Most likely these photographed trips weren’t the only ones!

Nowadays, Aniston and Cox are talking about the much-anticipated Friends reunion, which was pushed back due to COVID-19. The show will reportedly now debut some time in 2021, and has already started filming, with Aniston telling Deadline last year, “It’s going to be super. You know what? This has also given us more time to make it even more exciting and more fun than it would have been. So I choose to see it as the glass is half-full that it got postponed. Look, we’re not going anywhere. You’re never going to get rid of Friends, sorry. You’re stuck with us for life guys.”

Meanwhile, Cox added, “We’re going to have the best time. It’s going to be great” (via USA Today). Well, when you’re working with your best friend, how could it not be?