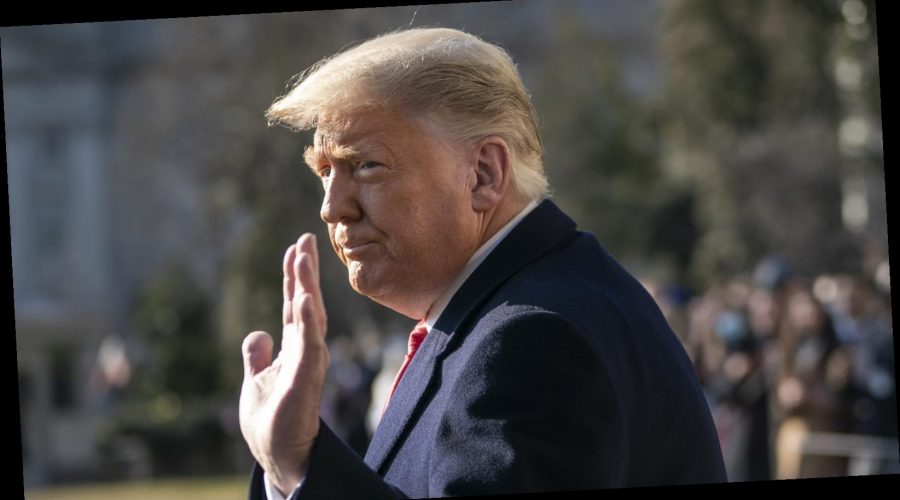 He may be banned from all major social media platforms, including his favorite means of communication (Twitter) but, Donald Trump isn’t done sharing his thoughts about the riots incited at Capitol Hill. Just days after the U.S. Capitol was stormed by Trump supporters who attended a rally where Trump reiterated his false election fraud commentary, Trump gave new remarks at the Texas border wall on Jan. 12, 2021.

As Trump praised the construction progress on the wall, he briefly mentioned the riots that took place on Jan. 6. “It’s time for peace and for calm,” he said, adding, “Respect for law enforcement is the foundation of the MAGA agenda.” (It’s worth noting that, during the siege, U.S. Capitol Police officer Brian D. Sicknick, was killed during an altercation with rioters, The Washington Post reported.) When asked by reporters whether he feels personally responsible for the violence at the Capitol, he replied, “If you read my speech … people thought that what I said was totally appropriate.” He argued that the “real problem” stemmed from the Black Lives Matter protests in summer 2020.

Before Trump’s rally, which was held the same day Congress was set to certify the election results and declare Joe Biden the next president, he told supporters the gathering would be “wild.” At the event, he said, according to The New York Times, “You’ll never take back our country with weakness, you have to show strength and you have to be strong.” He continued, “If you don’t fight like hell, you’re not going to have a country anymore.” Keep scrolling for more details about Trump’s actions and remarks following the riots.

Before rioters stormed the Capitol, the Trump family was recorded celebrating as they watched the mayhem on television. As the riots became more violent, Joe Biden called on Trump to end the unrest, and shortly after, Trump released a video message, stating, “We love you. You’re very special. Go home.”

Trump later took to Twitter, writing, “The 75,000,000 great American Patriots who voted for me, AMERICA FIRST, and MAKE AMERICA GREAT AGAIN, will have a GIANT VOICE long into the future. They will not be disrespected or treated unfairly in any way, shape or form!!!,” per NBC News. He then added, “To all of those who have asked, I will not be going to the Inauguration on January 20th.”

These tweets prompted Twitter to remove him from the platform, stating his words were “likely to inspire others to replicate the violent acts that took place on January 6, 2021, and that there are multiple indicators that they are being received and understood as encouragement to do so.”

Is Donald Trump worried about the 25th amendment?

Following the violence that broke out in the Capitol, many lawmakers have called for Donald Trump’s removal from office and requested the 25th amendment — which states that if a president is removed from office, the Vice President shall take his place —  be invoked. Trump doesn’t seem to be phased by this possibility, stating during the Jan. 12, 2021, press conference, “The 25th Amendment is of zero risk to me, but will come back to haunt Joe Biden and the Biden administration. As the expression goes, be careful of what you wish for.”

The president also argued that pursuing impeachment was a “continuation of the greatest witch hunt in politics” and would add to the country’s unrest. “It’s causing tremendous anger and division and pain far greater than most people will ever understand, which is very dangerous for the USA, especially at this very tender time,” he said.

Of course, it’s impossible to know what Trump is thinking privately about the situation. And only time will tell how all of this plays out.

01/13/2021 Celebrities Comments Off on What Donald Trump Really Thinks About The Capitol Riot
Recent Posts
We and our partners use cookies on this site to improve our service, perform analytics, personalize advertising, measure advertising performance, and remember website preferences.Ok