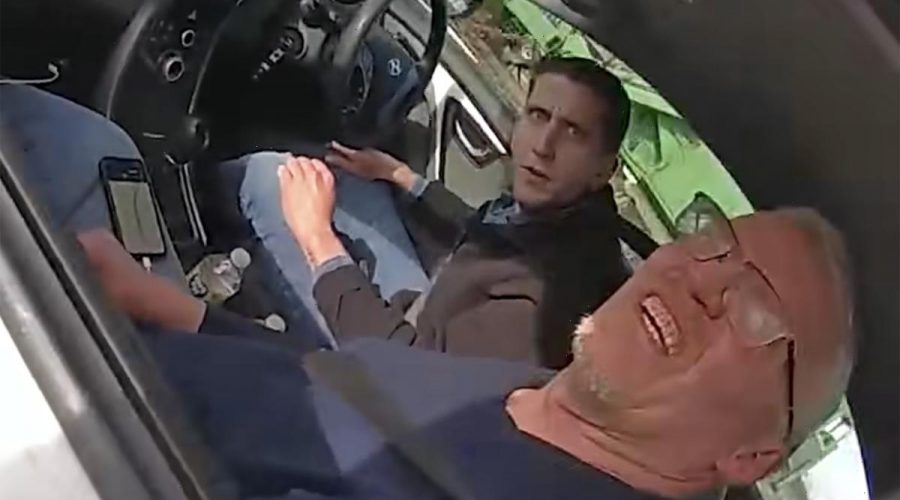 Another big murder case, another traffic stop video in which cops let the killer go? Scary — though this time at least it was long past the killings and there was nothing police could do.

You may have heard already, but it was revealed over the long weekend that Bryan Kohberger was pulled over twice last month, back-to-back, in Indiana. The grad student drove across the country from Washington State, where he was attending school, to Pennsylvania — where he was arrested for the shocking quadruple murder at the University of Idaho. During that drive, which he made with his father, one cop got a little suspicious of him — but apparently not suspicious enough. Just-released bodycam footage from an Indiana State Trooper shows the whole encounter…

The car was pulled over on December 15. Apparently they’d been following the car ahead of them too closely. Unfortunately for most of the video, the cop’s camera is faced downward at the car door. But when the cop first approaches, Bryan can be seen looking very nervous in the driver’s seat (see above).

It’s a pretty routine stop from the sound of things. Only at one point, he does ask where they’re headed — and they tell him they’re driving all the way from Seattle to Pennsylvania. The cop replies:

“That’s a long haul. Are you guys scared of airplanes?”

Oddly, Bryan’s father does bring up college campus violence! He mentions a shooting near his son’s college, Washington State University, in which a student threatened to kill his roommates before being shot by cops. An odd thing to bring up… But it works. The trooper lets them go with a warning.

Strange, given this was over a week after the Moscow Police Department had made the national plea for help in finding a white Hyundai Elantra in connection to the murders. But the trooper didn’t put those two things together. Police officials told TMZ they hadn’t been informed of a license plate or state of registration to look out for. It kinda sounds like they’re making excuses. After all, it’s a white Hyundai Elantra coming from the general area… though maybe the Indiana cop didn’t realize how close Idaho and Washington were?

Innerestingly, the Indiana State Police told TMZ that it was just *minutes* before that stop that they were stopped by officers from the Hancock County Sheriff’s Department. They also didn’t make the Elantra connection and let them off with a warning. Two close calls. Wild.

Anyway, you can watch the full encounter (below)!