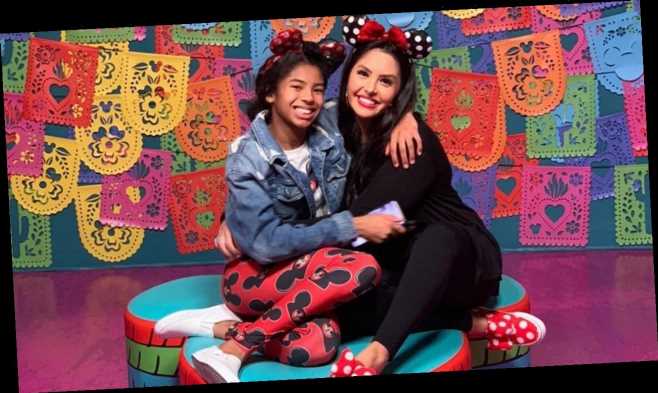 Jan. 26 is a hard day for the Bryant family. This time last year, Kobe Bryant and his 13-year-old daughter, Gianna “Gigi” Bryant, were killed in a helicopter crash. The retired NBA pro was 41.

On Tuesday, Vanessa Bryant, Kobe’s wife and Gianna’s mother, paid tribute to the pair by sharing a letter written by one of the late teenager’s friends.

In the moving note, Aubrey Callaghan wrote that she’s “thinking and praying” for Vanessa “constantly” and “cannot begin to comprehend” what she’s going through.

“[Gianna’s] smile and attitude push me to be better,” Aubrey wrote. “You have probably heard this, but if I ever become a mom, I hope my daughter turns out exactly as yours did.”

Aubrey remembered Gianna as someone who was “kind, caring and endlessly polite,” who taught her and their other friends to “be better versions” of themselves.

She next praised Gianna’s “love of life,” writing that she “attacked each day as though it was hers to conquer,” whether through basketball, her participation in their school musical, or her work on student council.

“She would smile and bring the rest of us up with her,” Aubrey wrote. “… Gianna was fiery and stubborn, she knew what she wanted and she fought to get it.”

“… She cared. She knew when I was having a bad day, and knew just how to make it better,” Aubrey added.” She was generous with her snacks when I forgot mine. She left me notes in my notebook that I cherish. She was incredible.”

While Aubrey noted that she’s had “a pit of despair thinking about [Gianna] and what she could’ve accomplished had she had a couple more years,” she’s tried to refocus her thoughts on “the mark she did leave on this earth.”

“Her fights for equality in sports made the world reconsider there [sic] opinions, she along with Mr. Bryant, set the wheels in motion,” Aubrey wrote. “But on a lower level, on behalf of every person who came across her, I can say that she changed our lives. Her simple actions made all of us a better person, and I believe that the results of this will never stop appearing.”

Aubrey concluded her note by writing, “I hope that in the midst of your intense sadness you catch a glimpse of joy in who the daughter you created and raised was. You did it right Mrs. Bryant, and we are all eternally grateful to you.”

“I am so, so blessed I got to have time with your angel of a daughter, and thank you for giving me that chance,” she added. “I love you and am thinking of you as we remember and honor her life. If you ever need more stories of her, I am filled to the brim and would be priveledged [sic] to share them with you.”

Vanessa was clearly moved by the letter, thanking Aubrey in the caption for “beautifully sharing some of your memories of my Gigi with me and allowing me to share them here on my ig.”

“Today I received this sweet letter from one of Gianna’s best friends, Aubrey. I love you Aubz (as my Gigi would call you),” Vanessa captioned the letter. “… My Gigi is INCREDIBLE and I truly appreciate your thoughtful letter. She loves you so much.”

Vanessa continued by writing that she misses her “baby girl and Kob-Kob so much, too.”

“I will never understand why/how this tragedy could’ve happened to such beautiful, kind and amazing human beings. It still doesn’t seem real,” she wrote. “Kob, we did it right. Gigi, you still make mommy proud. I love you!”

Ahead of the one year anniversary of Kobe and Gianna’s death, a source told ET that Vanessa and her other daughters — Capri, 1, Bianka, 4, and Natalia, 17 — “have been extremely thankful for their friends and family for their help and love over the past year.”

“Vanessa and people close to her plan to celebrate the one-year anniversary privately and reminisce on their time with the two,” the source said. “Vanessa and her daughters have gotten stronger over the past year but there are days when it’s much harder for them as it comes in waves. Vanessa plans to continue to honor Kobe and Gianna’s legacy and has some projects in the works to do so.”

Since the death of her husband and daughter, Vanessa has posted on several occasions in honor of her two loves lost.

Earlier this month, the 38-year-old posted a clip of Kobe talking about the ups and downs of marriage. He and Vanessa had been married for nearly 20 years when he died.

In the clip, a smiling Kobe calls happiness “a beautiful journey.”

“It has its ups and downs, whether it’s in marriage, whether it’s in career. Things are never perfect. But through love you continue to persevere and you move through,” he says. “Through that storm, a beautiful sun emerges. Inevitably, another storm comes. Guess what? You ride that one out too.”

For more on Vanessa and Kobe’s love story, watch the video below.

Inside Kobe Bryant’s Relationship With His Wife and Four Daughters