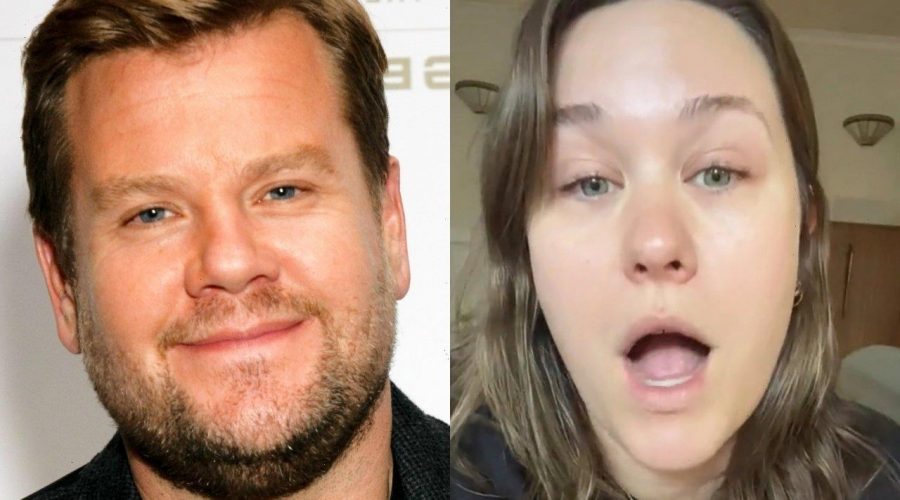 Keith Habersberger’s wife Becky details the alleged tirade involving the TV host, who recently made headlines for his ‘nasty’ behavior at a restaurant, in a TikTok video.

AceShowbiz -Becky Habersberger, the wife of Try Guys member Keith Habersberger, took to TikTok to share her experience witnessing James Corden‘s alleged nasty behavior. According to Becky, “The Late Late Show with James Corden” host once screamed at a Los Angeles busboy over a closed restaurant.

“I overhear [a] busboy telling James Corden that Little Dom’s is closed right now,” the makeup artist revealed in a TikTok video that she shared on Tuesday, October 18. She claimed that she was “walking down the street going to a happy hour” when she witnessed the alleged tirade.

Of the popular Italian eatery in Los Feliz, California, the influencer went on to say, “They close in the middle of the day between lunch and dinner.” She then shared that the busboy told James that “he can get him a reservation right when they open. He was trying to be really accommodating.”

However, Becky claimed that the British host wasn’t happy at all. The 44-year-old TV personality allegedly “yells at this bus

Becky’s video came after Balthazar owner Keith McNally called out James in an Instagram post, calling him the “most abusive” customer he’s ever had. In the scathing post, the restaurateur also revealed that he banned James from the iconic New York City eatery.

“James Corden is a Hugely gifted comedian, but a tiny Cretin of a man. And the most abusive customer to my Balthazar servers since the restaurant opened 25 years ago,” the 71-year-old wrote. “After eating his main course, Corden showed the hair to Balthazar manager G. who was very apologetic. Corden was extremely nasty to G, and said, ‘Get us another round of drinks this second. And also take care of all of our drinks so far.’ “

According to Keith, James also criticized his staff after his wife’s eggs were allegedly not prepared to her liking during brunch. “The kitchen remade the dish but unfortunately sent it with home fries instead of salad. That’s when James Corden began yelling like crazy to the server, ‘You can’t do your job! You can’t do your job! Maybe I should go into the kitchen and cook the omelet myself!’ ” he continued.

Even though the server was “very apologetic” and arranged for complimentary champagne for James and his wife Julia Carey, the host allegedly was so “nasty” to their server for the rest of brunch that she was “shaken” for the rest of her shift.

Keith, however, later shared that James apologized to him. “James Corden just called me and apologized profusely,” he wrote in a follow-up post. “Having f**ked up myself more than most people, I strongly believe in second chances,” he continued, before noting that the TV personality is no longer banned from his restaurant.