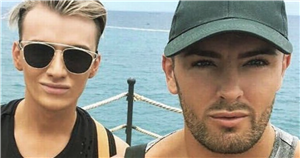 The Only Way Is Essex star Harry, 27, shared his heartbreak after it was revealed Rhys was found dead in Tenerife, where he is said to have lived, last week. Rhys’ cause of death is yet to be determined.

After a number of celebrities paid tribute to Rhys in touching social media posts, Harry has now broken his silence following the heartbreaking news.

Harry shared three photos of himself with Rhys, including smiling selfies of the pair and a snap of Harry and Rhys stood in front of a stunning backdrop of the sea.

As he shared a touching tribute with his 118,000 followers, Harry shared his shock over the tragic news in the caption.

He began with: “I can’t believe I’m even writing this” followed by a broken heart emoji.

Harry continued: “Rhys was such a big part of my life and I will never forget the memories we shared together. He was the most caring and thoughtful man and this news has truly broken my heart,” next to another broken heart emoji.

TOWIE star Harry added: “My thoughts right now are with he’s family, mum, brother, sister, nieces, nephews, Nan and all he’s friends”, as he placed a third broken heart emoji alongside his words.

Sharing his shock again, Harry added: “I still can’t believe this is true. RIP Rhys, I will never forget you,” before ending the caption with a white heart emoji and dove emoji.

TOWIE star Harry and Rhys dated in 2013. Bobby Norris later confirmed his romance with Harry in December 2013, but in January 2014, Harry insisted they were not in an official relationship.

At the time Harry confessed to cheating on Bobby with Rhys during a dramatic episode of TOWIE.

However, the drama recently resurfaced as Bobby, 34, and Harry clashed on screen.

Harry claimed he felt uncomfortable with his cousin Amy Childs spending time with his ex Bobby. And he later denied that he cheated on Bobby – insisting they were not together at the time of the alleged cheating – but did not name his ex Rhys on the ITVBe show.

Following a showdown between Bobby, Amy, 30, and Harry, Bobby decided to to take a break from the show.

In the latest episode Bobby appeared to put his differences with Essex icon Amy aside, but it surfaced that he hit out at Chloe Sims’ sister Frankie over the Sims sisters siding with Harry.

During a Bridgeton-themed bash, Bobby tearfully shared his regret over the row.