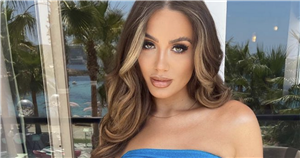 Frankie Sims has reportedly been on multiple dates with Jude Law and Sadie Frost's son Rafferty.

The 26 year old TOWIE star's friends have said that Frankie is keen on Rafferty, 26, and is "seeing where it goes".

Rafferty has been linked to a number of other celebs before including Rita Ora and Hana Cross as well as Frankie recently dating Love Island's Jack Fincham.

A source told The Sun: “Raff and Frankie have been on a few dates over the past few weeks.

“It has become the talk of Essex and everyone knows Raff and Frankie have been going out together. People are even joking about when she’s going to show him off on Towie."

They added: "She’s made it clear to her friends she is pretty keen on him but it’s early days and they’re not rushing into anything.

"He is a proper gent and a nice bloke, so she’s hit the jackpot."

Despite her recent relationship with Jack and splitting from her TOWIE co-star boyfriend Harry Lee last year it seems that Frankie is ready to date again.

She admitted on The Sun’s online show Towie: The Official After Party, hosted by Bobby Norris that she's got another romantic interest.

The star said: "I’ve actually been on a couple of dates with this guy that I’ve met.

"It’s really early days. He’s from outside of Essex and outside of Kent as well which is an important place to avoid. I’m swerving Kent and Essex."

She went on to mention that the pair have just been on a couple of dates but he 'seems nice' and then told Bobby to 'watch this space'.

Rafferty is taking after his famous dad as he's working as an actor himself.

He played the lead role in Twist, which is a reimagining of the Charles Dickens tale which was released this year and featured Michael Caine.

Just last month Joe Garratt from Love Island featured on TOWIE while he was dating Frankie but the romance didn't last long.

At the time Frankie said that she asked Joe to stay in touch with her after the split as he is a 'lovely guy'.

However she admitted that they haven't stayed in contact and that he's 'ghosted' Frankie.

The two of them met each other at the National Television Awards back in September where sparks flew between them.

One of their dates was featured on TOWIE last month.

For more juicy gossip on your favourite stars, sign up to our daily newsletter here