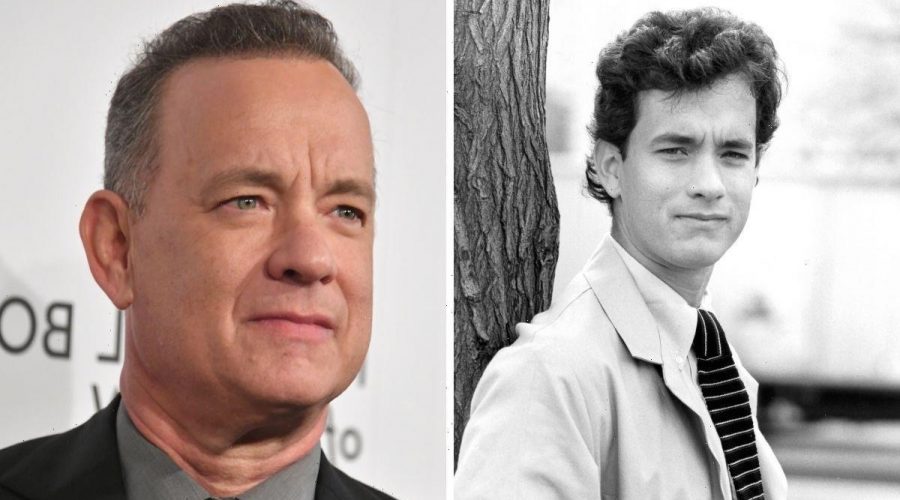 The One Show: Jermaine 'caught off guard' by Tom Hanks joke

Hanks’ turn as workaholic Chuck Noland in 2000’s Cast Away airs today from 2:20pm on Channel 5. It follows the story of Noland, who ends up stranded on a desert island at Christmas, after going on one last job of the year for his firm. Upon the island, Noland is forced to try and deal with the isolation it brings, as well as survive the harrowing conditions thrown up by the Pacific isle.

The survival flick was nominated for two Oscars, including for Hanks’ performance in the Best Actor category, though he would eventually lose out to Russell Crowe in Gladiator.

Hanks remains one of Hollywood’s biggest stars, and has earned a further three Academy Award nominations throughout his distinguished career.

However, despite being among the world’s most recognisable stars, little is known about Hanks’ personal life, until he opened up about it on Desert Island Discs in 2016.

Speaking to the show’s host Kirsty Young, Hanks discussed in detail his childhood, and relationships, particularly his first marriage which would end in divorce.

Their union produced children Colin and Elizabeth, which Hanks admitted was to “quell the loneliness” both actors felt.

He said: “Having a kid at 21 was the greatest thing that ever happened to me because I didn’t smoke pot.

Some six years later, Hanks met Rita Wilson, a fellow actor, who would end up changing his life forever.

By 1987, Hanks was divorced but a year later married to Wilson, who he noted “got” him.

Among the tributes he paid to his second wife on the show, was the inclusion of Talking Heads’ track One in a Lifetime, which reminded him of his first date with Wilson.

Another of his choices left Hanks clearly emotional, this time Strauss’s Also Sprach Zarathustra – used in 2001: A Space Odyssey.

Hanks noted how this offered him recollections as a child, and the nomadic childhood he’d experienced.

The star recalled how father Amos worked as a chef, and ultimately the family had to go where the money was, which meant 10 different houses in five years.

He continued: “This was the ‘wow’ moment of my life going from a kid trying to figure out what’s interesting in this life to young man yearning to be an artist.

“I started asking myself: ‘How do I find the vocabulary for what’s rattling around in my head?’

“Not long after I started going to the American Conservatory theatre by myself to see plays I had no idea even existed.”

Young probed the California-born star further on what the thoughts were in his head, with Hanks having to compose himself to respond.

In an apologetic tone, he laughed: “What have you done to me?

“No, it’s all right, because I put too much thought into this list. What it was, it was the vocabulary of loneliness.”