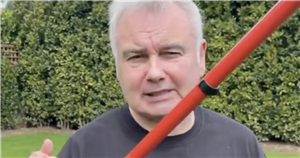 Eamonn Holmes has admitted it feels like he is "learning to walk again" and has been left dependent on crutches after dislocating his pelvis and suffering three slipped discs.

The 61 year old was diagnosed with the health struggles in March and has now given his fans an update on his road to recovery.

This Morning host Eamonn took to social media to share a video of himself hard at work with physiotherapist James Davis.

James told Eamonn's fans how they have been working together for the past couple of weeks and that the Irish presenter is now at the "rehab stage" of his recovery.

As he began performing his exercises, Eamonn told his followers: "This all looks very simple and it is very simple except it's like learning to walk again.

"I've lost nerves in my right leg and there's certain actions I can't do so even the most simple thing is hard but it's getting better."

Ruth Langsford's husband is seen working out in their garden before being treated to a massage in an attempt to stabilise his pelvis and lower spine.

He explained: "The whole recuperation path, there's so many aspects to it. James is the boss man and you know, he has me here on the treatment table. Some of it is quite pleasant.

"Not a lot if it but I know he's doing a good job and do you think we're making progress? Lots! That shows you how bad I was in the first place.

"But the treatment table and his magic hands very, very important," he continued.

Towards the end of the video, Eamonn is seen donning a pair of pressure socks, which help with circulation in his leg's nerve endings.

He said: "To round the day or the session off I put on my socks! These are pressure socks, don't worry I'm perfectly safe in them.

"These are used by a lot of elite athletes to help the healing process.

"In the meantime, it is so comfortable I think I'll just do 45 minutes and maybe doze off."