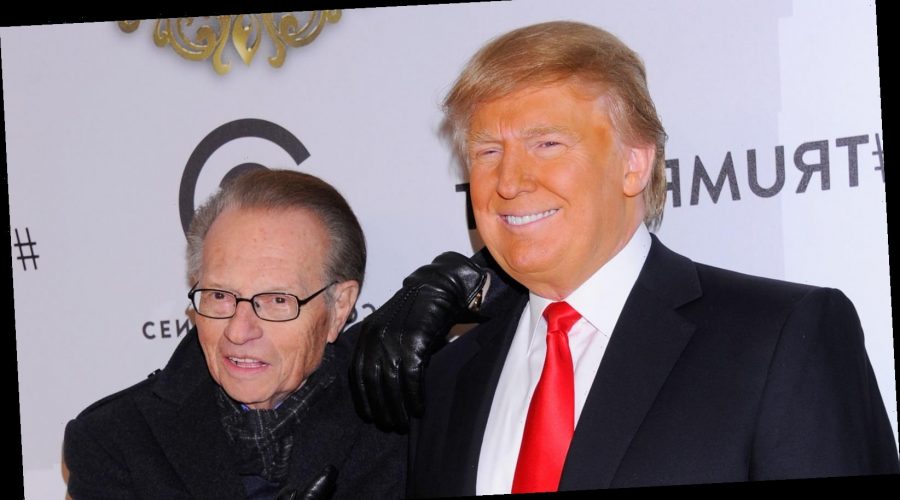 Nearly a month after broadcast journalist and television icon Larry King was diagnosed with COVID-19 in December 2020, a spokesperson from the company he co-owns, Ora Media, announced in a statement that King passed away on Jan. 23, 2021, at the age of 87. The news of King’s death was met, understandably, with outpourings of grief and love on social media by most, as well as a few less-than-savory tributes to the Brooklyn-born interviewer. But one voice from a former friend of King’s has remained notably absent among the cacophony of mourners: former President Donald Trump.

Part of Trump’s silence on the death of King can be chalked up to practicalities. Within the first few weeks of 2021, the ex-commander-in-chief was banned from multiple social media platforms, finally acquiesced his power as the leader of the U.S. to President Joe Biden after making numerous and unsubstantiated claims about voter fraud following the results of the November 2020 general election, and is currently undergoing a second impeachment trial. But despite the ramifications of Trump’s actions and how they’ve followed him in his post-presidential life, there might be another factor regarding Trump’s quietude on the death of the journalist he once called his friend. Read on below to find out why.

Though longtime broadcaster Larry King spoke frequently on the record about his longstanding relationship with former President Donald Trump — one that purportedly went back to when Trump was known for his business empire rather than as a reality TV personality or as a dabbler in politics — things seemingly changed between the two around the time Trump launched his bid for the presidency in 2016.

“I had him on [TV] countless times. I’ve dined with him. I’ve socialized with him,” Larry King once said of their friendship during a June 2016 interview on CNBC’s Squawk Box, but also expressed hesitation, if not outright refusal, to vote for him rather than his opponent, then-Democratic nominee and former Secretary of State Hillary Clinton.

Stressing that he had known Trump for over 40 years, King then went on to say that “when I’m down to the two, I would tell Donald, ‘Donald, I love you. You’re a great friend. But I can’t buy some of the things [you’ve said].'” Much of this referred to Trump’s radical change in policy stances in an effort to cater to both the Republican voter base and conservative lobbyists, two of which King mentioned by name. “The Donald I know was pro-choice…[and] anti-guns,” King said at the time. And it seemed that from there, King’s opinion of Trump only grew worse.

Throughout the rest of Donald Trump’s 2016 presidential campaign and his subsequent term in the White House, television host Larry King became increasingly critical of both Trump’s political stances and his behavior as commander-in-chief. Though King sometimes expressed pangs of sympathy for Trump while discussing his thoughts on Trump’s abilities in office, he decidedly did not mince words in his overall critiques.

“He’s not what they make, but I’ve got to admit that so far, this is one of the most ridiculous presidencies I’ve ever seen,” King noted an April 2017 appearance on the SiriusXM show Tell Me Everything (via The Hill).

Trump, too, seemingly distanced himself from King once he assumed office in January 2017. Speaking with The New York Daily News in mid-2017, King disclosed at the time that he had not heard from Trump since his inauguration, despite the fact that they had spoken nearly every day during his 2016 campaign.

“He talked to me every day during the campaign,” said King. “I haven’t heard from him since he was elected. I hope he’s still willing to do it.” The journalist also speculated whether his decision not to vote for Trump in 2016 contributed to his abrupt silence. “He knows I didn’t vote for him, but we’re old enough friends that I told him,” King then added, “[and] he understood.” But in the end, it seems he didn’t.