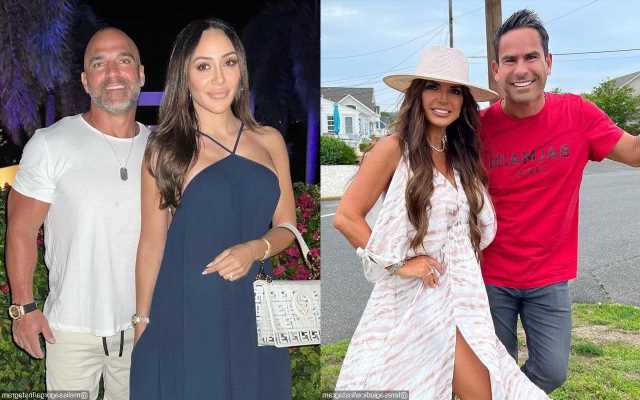 The ‘Real Housewives of New Jersey’ star reacts to her brother and her sister-in-law skipping her wedding to Luis Ruelas which took place at the Park Chateau in East Brunswick, New Jersey on August 6.

AceShowbiz –Teresa Giudice isn’t bothered by the fact that her brother Joe Gorga and his wife Melissa Gorga decided to skip her wedding to Luis Ruelas. In a new episode of her podcast, “The Real Housewives of New Jersey” star shared her reactions to their absence at the nuptials on August 6.

“Listen, I found out a few days before my wedding that they weren’t coming, and I’m totally fine with it,” the 50-year-old reality TV star said in the Wednesday, August 17 episode of her new podcast, “Namaste B$tches”.

Teresa went on to tease that the whole drama will be featured on “RHONJ”. “You’ll see it play out on TV,” she said. “The way that everything played out with my wedding, everything that happened is the way it was supposed to be. I’m all about that …I’m all about good energy, and whoever wanted to be at my wedding was there.”

It was reported that Joe, who appeared to shade Teresa the night before her wedding, and Melissa skipped the wedding because Teresa brought up unfounded infidelity rumors about the couple in the finale of “The Real Housewives of New Jersey” season 13. Melissa and Joe addressed their absence in the Thursday, August 11 episode of her “On Display” podcast, revealing that they were actually invited to the wedding.

“Obviously, we did not attend your sister’s wedding. We have a laundry list right of reasons in our heads [of] why and I will let all my listeners know this – obviously, there was something that went down at the finale of filming ‘The Real Housewives of New Jersey’,” Melissa began the episode. “Those exact details, I obviously cannot say today. Anything that we have filmed is something that I am not able to talk about.”

She went on to say that that the “full, entire story” is not out there, adding that “stories that are out there [are] obviously not coming from my camp.” The singer also didn’t deny that there’s a “crazy” drama as she continued saying, “Yes, there was a little aggression from certain people that could have been a little scary.”

The pair additionally hinted at past altercations with Luis. “We covered up a lot of things,” Melissa said. “A lot of things we know and now I’m sitting back – I’m not gonna lie – second-guessing, like, why?”

The two went to have fun at the beach on the wedding day, instead of attending Teresa and Luis’ big day at the Park Chateau in East Brunswick, New Jersey. Meanwhile, Teresa’s fellow “RHONJ” castmates, including Dolores Catania, Margaret Josephs, Jennifer Aydin and Jackie Goldschneider, were among the 220 guests at the ceremony.