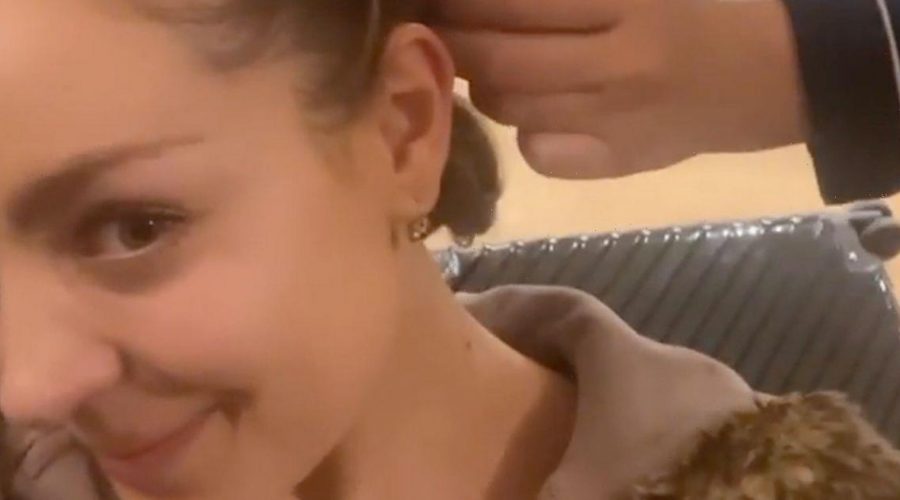 Strictly Come Dancing star Amy Dowden got a visit from her rarely seen twin sister Becky as she recovers from a recent hospital dash. The dancer – who suffers from Crohn’s disease – was rushed to the hospital suffering a terrifying health scare.

The Welsh ballroom and Latin American dancer unfortunately had to pull out of the most recent show on Saturday night after experiencing what was described as "unexpected Crohn's flare up".

In the time since being admitted, she has been getting some much needed rest and relaxation whilst enjoying visits from her twin.

Amy, aged 31, uploaded a boomerang to Instagram showing her sister plaiting her hair and she captioned it with the line: ”When your twin comes to visit… Straight on the sister duties @becky_dowden.”

Amy had posted some snaps from her hospital bed, telling fans: "Unfortunately, I was missing from the show as I had an unexpected Crohn’s flare up and hospital admission in which I received unbelievable care.”

She continued: “I’m recovering very well and certainly being well looked after and look forward to returning to the dance floor. Big thanks to lovely @saradaviescc and @tomfletcher for taking care of me (of all the days to be poorly, Ben was in Blackpool with the dance school).”

Amy has been very vocal and open on the topic of her condition, working to break down the stigmas and barriers that can exist it. The condition causes severe inflammation and ulcers throughout the whole digestive tract, often requiring surgery or heavy duty medication to keep it under control. Amy has revealed that she has been hospitalised more than 100 times and has had to fight hard to manage to sustain a career dancing professionally whilst experiencing the debilitating disease.

Amy’s illness started aged 11 but she was still determined to achieve her ambition to be a professional dancer. She was finally diagnosed with Crohn’s aged 19.

She has previously spoken to This Morning about the condition, back in 2019 on World IBD Day.

She told This Morning: “It was such a relief to finally receive a diagnosis. I just have to look out for the signs, which for me start with swollen eyes. Then I call my doctor.

"I have learnt to listen to my body, and to notice when things start getting out of tune. I know when I need to rest, and when I have to eat simply and drink lots of water.” Amy made a documentary for the BBC where she investigated the condition and frankly discussed her feelings around it.

She said: "Strictly has been more than a dance show to me, it got me through the darkest times of my illness. For me it was a big inspiration to keep me dancing.

"Dancing has pulled me through my Crohn's but it's a battle. I live in fear that what I love the most could be taken away.”