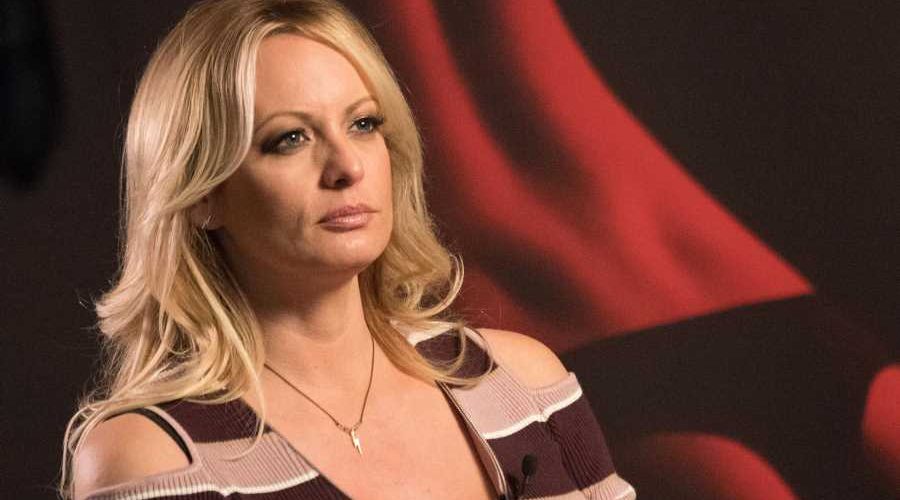 It’s unclear whether Michael Avenatti is making progress convincing a jury he was justified in taking his client Stormy Daniels’ book payments and lying to her about their whereabouts, but everyone in the courtroom Friday learned a lot about Daniel’s possible future show, Spooky Babes. Avenatti has pleaded not guilty to charges of wire fraud and aggravated identity theft charges. He is representing himself, which allows him to cross-examine prosecution witnesses.

In his attempt to call Daniels’ credibility in question, Avenatti set her up to basically give a press conference on the ghost-hunting TV show that she’s been trying for two years to get off the ground.

The spooky circumstances allegedly began in the spring of 2019, shortly after Daniels’ and Avenatti’s working relationship fell apart because, she testified, she discovered his alleged lies and the theft of her book payments. Daniels confirmed on the stand that around that time, the “unexplainable experiences” began. “Physical attacks from invisible assailants, poltergeist phenomenon, shadow figures, unexplainable sounds and voices prowled [her] home” in New Orleans, said Avenatti, quoting from Daniels’ Spooky Babes website.

“Of course. It’s a television show,” she said.

He asked whether she’d fabricated any of these creepy happenings for the purpose of the show.

“Absolutely not,” she said.

She also confirmed that a medium had told her a “portal” had opened in her house and a “dark entity” came through it. This entity, she testified, had caused her boyfriend at the time to attack her, and had turned his eyes black. Daniels affirmed under oath that on one occasion, the entity had held her boyfriend underwater in the bathtub. Then, she affirmed, he’d run upstairs, screamed at her, and “put his hands on” her. In fact, she said, he’d choked her so hard, he broke her collarbone. Avenatti asked Daniels if it was true that she’d once said of that encounter, “I looked at him and there was no color or white in his eyes.” “Correct,” Daniels said. She said her boyfriend moved out in April 2019. Avenatti asked if he had called her “nuts” before he left. Daniels confirmed he had questioned her sanity.

On another occasion between April and November  2019, after her boyfriend had left, Daniels admitted she had started seeing dead people in her house. On one occasion, she affirmed she’d seen a woman in the kitchen crying over a child who had passed away. “She was standing there sobbing and cutting her wrists, attempting to kill herself,” Avenatti said, quoting Daniels’ description of the ghostly encounter. Daniels confirmed it was true. Avenatti asked if she remembered saying the room had then “morphed,” revealing possessions in the space that weren’t hers. She said she could not recall that detail. But then, she affirmed, she looked down and her own arm was covered in blood, although she could not remember having opened a drawer, removed a knife, and cut herself.

Daniels said she developed health problems living in the house. She testified that an energy healer had peformed a Reiki scan that revealed a “blockage” in her head. U.S. District Judge Jesse Fruman seemed not to recognize the word Reiki; he asked Daniels to spell it for the record.  She also affirmed she’d experienced memory loss and bleeding from her eyes, ears, and nose. She’s since moved to a new home, at which point her health problems receded. “Luckily, it was stress,” she said. Although she’s moved out, she maintains a “weird obsession” with the place. She calls the house a “she,” and testified that she’s gone to visit it with the Spooky Babes team, who has filmed her talking to the house.

“How do you speak with the dead?” Avenatti abruptly asked Daniels at one point. “What do you mean?” she responded, before adding, “cards, meditation.” She said the dead speak back to her. “We record it,” she said, referring to the TV show. She also said she can see things that happened inside other houses without going inside them through a phenomenon known as “remote viewing.” Avenatti asked how that works. “I don’t know how it works,” she said. “That’s why I have the show. I want to learn more.”

Avenatti also wanted to talk about Susan, the haunted doll who Daniels testified on Thursday has her own Instagram account. Turns out, Daniels has found her having moved inexplicably from one place to another in her house, and the doll may have spoken to her. On one occasion, she explained, Susan was buckled in with a seatbelt in the back seat of Daniels’ car, which was parked in the driveway. Daniels, inside the house, heard someone — or something — calling, “Mommy, Mommy,” from outside, when the Spooky Babes crew was there. “I found her unbuckled, face down on the floor of the car,” Daniels said. Avenatti pressed her to admit she thinks the doll can talk. “I don’t know if it was her,” she said, referring to the voice she’d heard. “We assume.”

Daniels also believes she is a medium, she affirmed, and reads oracle cards for pay. At one point, Avenatti quoted her saying she was pretty sure “coming forward and saying that I talk to dead people” was “ruining” court cases she was involved in. She confirmed this was true.