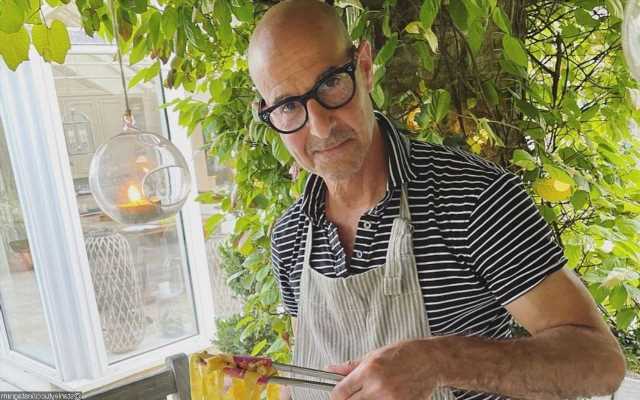 ‘The Devil Wears Prada’ actor reveals he was diagnosed with cancer in 2018 and initially refused to go through the ‘horrible’ treatments after seeing how his first wife Kate Tucci endured them.

AceShowbiz –Stanley Tucci has revealed he battled cancer three years ago and was so sick he required a feeding tube for six months.

“The Hunger Games” star was diagnosed with cancer in 2018 after doctors discovered a tumor at the base of his tongue.

“It was too big to operate, so they had to do high-dose radiation and chemo,” he told Virgin Atlantic’s inflight magazine Vera.

Tucci didn’t want to endure the intense treatments at first, after seeing how “horrible” they were for his first wife, Kate Tucci – mother of his three older children, 21-year-old twins Isabel and Nicolo and Camilla, 19 – who died following a breast cancer battle in 2009.

“I’d vowed I’d never do anything like that, because my first wife died of cancer, and to watch her go through those treatments for years was horrible.”

But Stanley eventually agreed to let doctors treat him.

“The kids were great, but it was hard for them,” he explained. “I had a feeding tube for six months. I could barely make it to the twins’ high school graduation.”

He is now in remission but feels “much older” following the health battle.

“[Cancer] makes you more afraid and less afraid at the same time,” he added. “I feel much older than I did before I was sick. But you still want to get ahead and get things done.”

The “Spotlight” actor, who shares kids Matteo, six, and Emilia, three, with second wife Felicity Blunt, sister of actress Emily Blunt, said earlier this year he has never stopped mourning for Kate – and admitted it will “always be hard” for the kids and himself to live without her.

“You never stop grieving,” he noted.