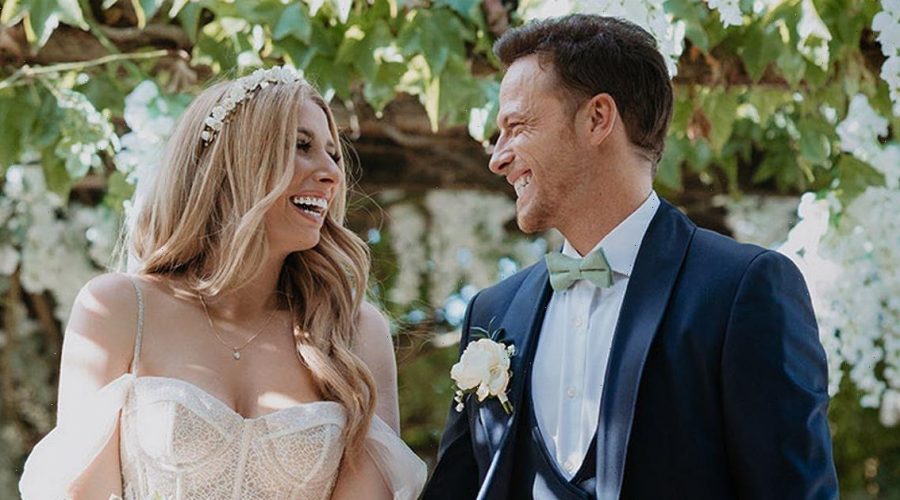 Stacey Solomon has shared an intimate glimpse inside her fairytale wedding to Joe Swash, after the couple tied the knot in a private ceremony at their Essex home, Pickle Cottage.

The 32 year old mum-of-four married the former Eastenders actor, 40, on Sunday after months of planning, and two postponements.

Having showcased her DIY wedding preparations every step of the way, many fans have been eagerly awaiting a glimpse of the wedding itself – something Stacey happily obliged as she shared a stunning collection of wedding photos on Instagram on Thursday.

The photos, which were taken by wedding photographer Chelsea White, showcased the happy couple in all their glory, with the cover image showing Joe and Stacey walking hand in hand down a flower strewn aisle, while gazing adoringly at each other.

A second photo then shows the smiling couple intimately embracing in a field near their beautiful family home, as Stacey’s stunning wedding dress cascades down around her. Several more snaps from the day showcase a running theme of joy and heartfelt affection.

The couple tied the knot in a Jewish ceremony with several famous faces in attendance at the celebration including Stacey's Loose Women co-stars, such as Linda Robson, 64, along with TOWIE stars Ricky Rayment, 31, and James 'Arg' Argent, 34.

Arg is said to have performed with his band, The Arg Band, during Stacey and Joe's big day, according to MailOnline.

Speaking about how much the day meant to her, Stacey described marrying Joe as a “dream” as she poured her heart and soul out in a deeply personal caption alongside the images.

The blushing bride wrote: “Forever. Me and My Husband. I don’t think I will ever get used to saying that. It all feels like a dream.”

She then continued by sharing a quote from acclaimed children’s author Dr. Seuss, which read: “You know you’re in love when you don’t want to fall asleep because reality is finally better than your dreams.”

The former X Factor star then went on to thank everyone who was a part of her wedding as she gushed over her “special day that we didn’t want to end.”

She then wrote: “We love you all & the special community we’ve built on here so so much and couldn’t wait to share these moments with you.”

In an especially poignant twist, Stacey and Joe revealed that they had copyrighted the photos to their wedding photos, with their use in any publication hinging upon a donation to be made to a charity to support bereaved children, as Joe had lost his father at a young age, just like hers.

Choosing to use their happy day to bring little more light to children growing up with loss, Stacey then added: “Joe lost his father at the age of 11 and so did my dad. A huge part of our wedding day was reflecting on how this had a huge effect on them and how hard it is, even to this day to deal with.

These memories are so special to us and it would mean the absolute world to us if they made a difference to children growing up with the loss and heartache that my father and my husband did.”

OK! has made a donation to a charity of Stacey and Joe's choice.