Stacey Solomon is all of us as she gets some Christmas cleaning done on a Sunday.

The Loose Women star took to her Instagram stories to show a couple of cluttered spaces in her house, before asking viewers to ‘tap’ to clean, and then revealing the area looking spotless.

Stacey, 30, has been really getting into the Christmas spirit having put up all of her decorations back in November, and last night she shared videos of herself getting some wrapping done. The X-Factor star added it was “time to sort the house out before those boys get home,” and shared a shot of the island in her kitchen covered with takeaway boxes, mugs and Heroes and with a ‘tap’ the next scene shows a very clean surface and surrounding area in a very Mrs Hinch-esque video.

Moving through to her dining area, the star shares a photo of her table covered in blankets, coats and boxes and with another tap to clean, Stacey shows a clean surface and space.

Stacey, who regularly posts updates of her children and family life, has three children, Leighton, Zachary and baby Rex who she shares with partner Joe Swash. And, mum of three Stacey, recently Mum of three recently celebrated her son Rex sleeping through the night with a hilariously sweet video.

The 30 year old couldn’t contain her excitement as she shared with her 2.5million Instagram followers as she shared a video of herself celebrating the milestone every parent looks forward to with her fans.

Speaking in the video, Stacey said: “He slept through last night. Nine ’till seven,” before zooming in to her grinning face. 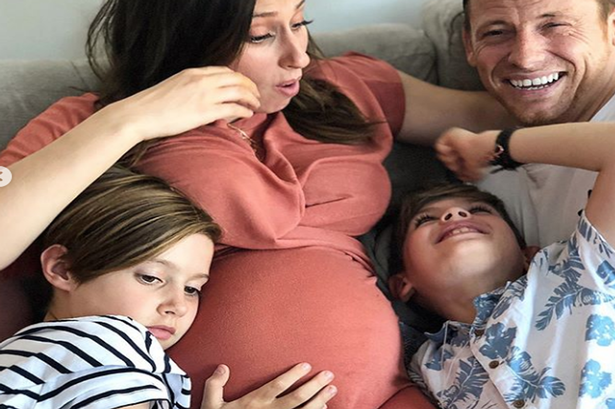 She then shared a hilarious video of her dancing and singing along to the song, I’m So Excited by The Pointer Sisters, while laying on her bed.

The Loose Women panellist has publicly documented her journey into becoming a mum again since Rex’s birth in May.

Earlier in the week, Stacey’s podcast, Here We Go Again, delved into her difficulties with breastfeeding her son as a newborn. A clip in the podcast, which Stacey also shared on her Instagram story, revealed she confided in her Loose Women co-star Nadia Sawalha.

The voice note, taken days Stacey gave birth to her son, shows Stacey saying she felt “crazy” because she was struggling to breastfeed her baby boy.

Speaking in the clip about her breastfeeding difficulties she says: “I am really struggling with it, I don’t want to bottle feed him because everyone will want to feed him and he is so small I don’t want anyone near him. But I am being so crazy.

“But I am just so, umm, just going to call these people. I had my health visitor out and she showed me in different positions but I think it is just the way his mouth is.”

She added through tears: “You know, he hasn’t got a very big mouth and he can’t get it all the way around my nipple. So he just sucks on the top bit.

“It is so sore. I don’t know. He is really little and also I feel sad and I just want to put him back in my belly. I don’t want anyone to come near him, touch him, breathe on him, kiss him. People keep kissing him and I feel weird about it. I think I am going crazy.”

12/08/2019 Celebrities Comments Off on Stacey Solomon documents herself giving her house a clean – and it’s so satisfying
Recent Posts
We and our partners use cookies on this site to improve our service, perform analytics, personalize advertising, measure advertising performance, and remember website preferences.Ok