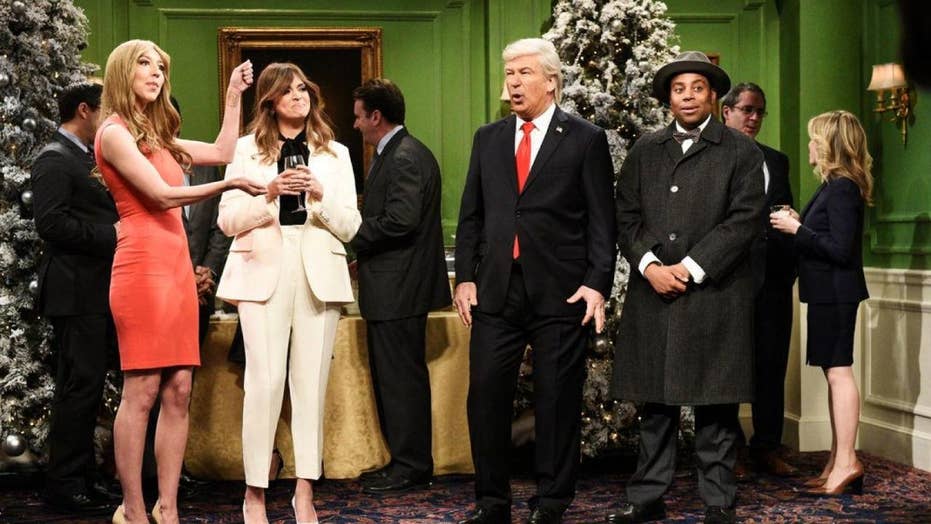 Donald Trump tweets NBC, ‘SNL’ should be tested by courts

President Donald Trump tweets NBC, ‘SNL; should be tested by courts. This comes after the shows Christmas parody sketch, which depicts a world where Hillary Clinton was elected president.

NBC’s “Saturday Night Live” has satirized presidents and political figures for decades, but the White House's current tenant thinks the show is too one-note, and nothing more than a Democrat-funded TV commercial.

“A REAL scandal is the one-sided coverage, hour by hour, of networks like NBC & Democrat spin machines like Saturday Night Live. It is all nothing less than unfair news coverage and Dem commercials," Trump tweeted after Saturday night's season finale. "Should be tested in courts, can’t be legal? Only defame & belittle! Collusion?”

Some critics agree about the one-sided part, at least. DePauw University professor and media critic Jeffrey McCall told Fox News that “SNL” is “clearly designed as much as a political commentary show as it is a comedy, entertainment show,” but he doesn’t think NBC honchos seem to mind.

“The left-leaning bits are designed to appeal to a certain audience segment and it has been successful in reaching that audience. This sort of political satire has long roots in American culture, of course,” McCall said. “The one-sided nature of the comedy does mean that the show will have trouble finding broad appeal, but ‘SNL’ has a loyal niche following and the support of most socio-cultural critics. Thus, NBC is hardly worried that Trump supporters might be offended or tune out.”

As each person from his administration approaches, Trump learns that him not being president worked out for the benefit of everyone. For example, the sketch suggested that he and Melania got a divorce and remarried others, Kavanaugh never made it onto the Supreme Court and Mueller was able to spend more time with his kids instead of having to “investigate some idiot for treason.” The sketch also envisioned a Muslim immigrant from Syria discovering a cure for baldness and transgender Navy SEALs stopping terrorism.

McCall says Trump is an easy target and mocking him fits the “political objectives of the ‘SNL’ hierarchy,” so viewers shouldn’t expect the NBC program to tone it down anytime soon since it's not illegal to lampoon the president. But he also noted the late-night fixture has seriously sharpened its knives for the sitting commander in chief compared to big Democratic political fish.

“Surely, ‘SNL’ has had fun with content about Barack Obama and Hillary Clinton, but the tone has not been nearly as charged as with the attacks on Trump,” McCall said. “’SNL’ is exercising its comedic and political free speech license to take on political personalities and issues as it sees fit, so Trump and his supporters should not expect any sort of balance. If anything, expect ‘SNL’ to give Trump a very rough time heading into the 2020 election season.”

"Surely, ‘SNL’ has had fun with content about Barack Obama and Hillary Clinton, but the tone has not been nearly as charged as with the attacks on Trump"

“Saturday Night Live” has featured everything from Chevy Chase as Gerald Ford, Dan Aykroyd as Jimmy Carter, Joe Piscopo and Phil Hartman playing Ronald Reagan, Dana Carvey’s legendary portrayal of George H.W. Bush, Darrell Hammond as Bill Clinton, Will Ferrell as George W. Bush and Jay Pharoah as Barack Obama – but none of the past POTUS impressions were seen as mean-spirited as Baldwin’s Trump.

Comedian Tim Young told Fox News that “SNL” treated both Obama and Clinton with reverence and admiration, as opposed to the current treatment of Trump.

“Their satirizing of Obama was lighthearted and fun, and came from a place of respect for the man. I can’t recall an episode where they belittled him, his family or his career,” Young said. “In Hillary's case, I think they jumped the shark and nearly granted her sainthood.”

“Their satirizing of Obama was lighthearted and fun, and came from a place of respect for the man"

“It wasn’t funny and it actually made no sense for the comedy show to have a 'sad that she lost' cold open,” Young said.

Media Research Center vice president Dan Gainor agrees with Trump that “SNL” has been a “Democrat spin machine,” for decades but likens it more with to “a garbage disposal.”

“’SNL’ mocked Obama occasionally, including taking digs at Obamacare and his Ebola Czar. But, when they fired cast member Jay Pharoah, who did the Obama impersonation, he noted they didn’t care about making fun of [Obama],” Gainor said. “Now contrast that with SNL’s anti-Trump insanity where they brought in an A-list actor, Alec Baldwin, to mock Trump and the show is constantly running skits attacking the president. Calling it a spin machine is being nice.”

The Washington Post recently examined at how past presidents have handled being parodied by “SNL,” which noted that Ford didn’t appreciate being portrayed as a klutz but “embraced the shtick” for the most part – which is the strategy of most presidents.

“It was a strategy that most media-age image consultants would hail as a no-brainer: Hide your pique, show you can take a joke, don’t let your bruised feelings become the next story. It was more or less the way every subsequent president has handled his NBC doppelganger. Until now. President Trump doesn’t laugh,” Post feature writer Steve Hendrix said.

"Yes, the media deliberately misleads and spins. It’s legal, and it needs to remain legal. The 1st Amendment is the backbone of American exceptionalism"

Hendrix pointed out that while Carter’s portrayal was less-than-flattering and Reagan largely ignored the show, Carvey and H.W. Bush became close friends and Clinton “seemed at ease” with the show. Meanwhile, George W. embraced the show and the Post admitted that Obama “may have never felt much need to push back on the comparatively calm, drama-free renditions” of his presidency.

A plethora of public figures on both sides of the aisle poked fun at Trump for appearing bothered by the show.

Congressman-elect Dan Crenshaw (R-TX) wrote, “Yes, the media deliberately misleads and spins. It’s legal, and it needs to remain legal. The 1st Amendment is the backbone of American exceptionalism.”

"Every analysis and study around coverage of the president is overwhelmingly negative, but this is ridiculous. Particularly the SNL part,” The Hill media reporter Joe Concha responded to Trump’s tweet.

Meanwhile, Republican National Committee chairwoman Ronna Romney McDaniel agreed with the president and tweeted a clip to the “SNL” segment along with a pro-Trump message.

“Will liberals in Hollywood ever recognize that life is better for millions of Americans under @realDonaldTrump? Wages are up, unemployment is down, and industries like manufacturing are booming after years of decline,” Romney McDaniel wrote.

12/18/2018 Celebrities Comments Off on ‘SNL' is tougher on Trump than past presidents, but NBC won’t let up anytime soon, experts say
Recent Posts