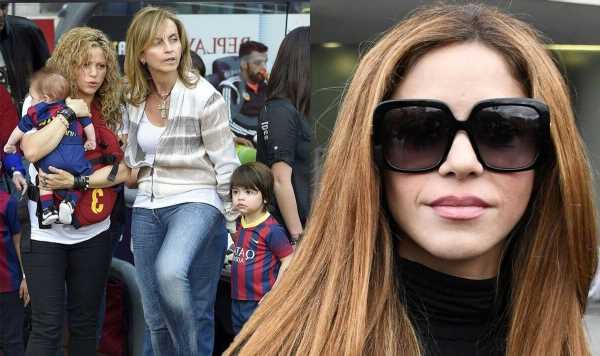 Shakira, 45, announced her shock split from footballer Gerard Pique last June after 11 years and two children together. Having just released her diss track seemingly aimed at her former partner, the Columbian singer has been reported to be separating parts of her Spanish home that are connected to her mother-in-law’s property.

Shakira’s Spanish property is connected in some areas to that of her former in-laws and Shakira is reportedly seeking to separate them, according to Marca.

They reported that a TV camera spotted a cement mixer working around the singer’s home in Barcelona.

It comes after she set up a terrifying lifesize witch doll on the balcony of her Spanish home which reportedly looks over her former mother-in-law’s pad.

Shakira also released a diss track which seems to be aimed at her ex-husband last week with producer Bizarrap.

Since the breakup, Gerard has been pictured kissing his new love interest Clara, as they appear to be far from hiding their blossoming relationship.

Shakira issued a thinly-veiled dig over the professional footballer’s new love as she quipped in her song: “I’m worth two 22s. You traded a Ferrari for a Twingo. You traded a Rolex for a Casio.”

In an apparent swipe at the former Manchester United and Barcelona defender, Shakira sang: “A lot of gyms. But work your brain a little bit too.”

Shakira seems to make another allusion to Clara with the lyrics: “She’s got the name of a good person. Clearly is not how it sounds.”

Gerard appeared to have responded to those lyrics by announcing Casio will become the sponsor of the King’s League.

He explained his sponsorship deal with Casio during a live stream of the King’s League, he said: “We have an agreement with Casio,” which was followed by laughter.

Gerard then added: “I’m serious… we have reached an agreement with Casio for the Kings [League], yes, because we have many countdowns and we have many watches… this watch is for life, I’m telling you!”

Residents in the area have reported hearing Shakira “blasting the song at full volume” from her home.

It has been reported that the relationship between Shakira and Montserrat Bernabéu, Gerard’s mother, has turned sour after she welcomed her son’s new romance.

Elsewhere, Shakira is also facing a £12 million tax fraud trial in Spain with the singer also referencing that in her music.

She sang: “You left me with my mother-in-law as a neighbour. With the press at my door and debt with the taxman.

“You thought you’d hurt me and I came back stronger. Women don’t cry anymore, women invoice.”

It is not the first time Shakira has seemingly shaded Gerard in her music after making reference to a “necessary” split with an ex who is as “cold as Christmas” in her song Monotonía.

The song, meaning Monotony in English, starts with Shakira singing in Spanish: “It wasn’t your fault, nor was it mine. It was monotony’s fault. I never said anything but it hurt me. I knew this would happen.”

She then alludes to the relationship being over before it ended, singing: “It’s a necessary goodbye. What used to be incredible became routine.

“Your lips don’t taste of anything to me. Now it’s the complete opposite.”