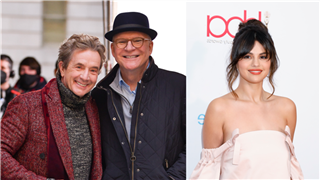 You can thank Selena Gomez for teaching Steve Martin and Martin Short the meaning of “WAP.”

The 29-year-old actress/singer may co-star with two of the best actors in the biz, but she enlightened them on some of today’s biggest hits. ET spoke with the trio while promoting their upcoming series, Only Murders in the Building, where Gomez revealed she had to explain what Cardi B and Megan Thee Stallion’s song is all about.

Short began by praising Gomez, recalling how he met her on the first day of shooting. “She was in the makeup chair…and right away I could tell within five minutes she was fabulous, funny, loose, and wanted the set to be the way we all ideally wanted.”

“And I think every time the three of us went back to our little holding area, and read the news from each other’s phones and laughed, and, you know, she tells Steve lyrics to ‘W.A.P.,'” Short continued, before Gomez interjected, “Why did you say W.A.P? It’s WAP.”

Telling ET she “certainly did” explain the meaning of the NSFW word, Short asked, “Why can’t you say W.A.P?” to which Martin said, “‘Cause that’s not what they say.”

“That’s not what the kids say,” Gomez also quipped.

“That’s like calling the U.S.A. USA,” Short added, saying the abbreviation as a word.

When asked what they thought about the meaning of WAP, Martin joked that he’s “known it for years.”

Gomez, Martin and Short co-star in the upcoming Hulu dramedy. The 10-episode series follows three strangers who share an obsession with true crime and suddenly find themselves wrapped up in one.

Only Murders in the Building marks Gomez’s first regular role on TV since Disney Channel’s Wizards of Waverly Place. She starred as Alex Russo on the series for five years, from 2007 to 2012. The actress noted that taking on this new role was “different” than her Disney days.

“When I was on Wizards, it was four cameras, a live audience, five days a week, really fun,” she shared. “And this one was just one camera. Well, we had a couple of cameras I guess. It was a bit movie style, so there was the difference already. But I just enjoyed it more because I feel like I could concentrate a bit more on the character and just have fun with it. I felt like I could just have freedom to do whatever I felt like she would do.”

“I do feel like a little bit of the character rubbed off on me because I feel like I am definitely more sarcastic and dry,” she added.

Gomez, meanwhile, “had a great time” working alongside the comedic geniuses, sharing, “As you can tell, I can barely keep a straight face.”

“Just hanging out with them, it was so wonderful and I learned so much being around them,” she relayed. “They’re legends in their own right, but they’re good people, humble, funny, kind and professional, and it was just the best.”

Martin, as co-creator of the show, added that Gomez’s role was originally meant for an older person but then opted to rework the part.

“Marty and I have a long history and Selena came in as the, what would you call her? The pot stirrer. It’s a different break that not only works off-screen but it also works on-screen to have a sort of commenter on us older gentlemen,” Martin explained. “So it was suggested that maybe we need this type of element in the mix. And usually we get a list of possible actors and actresses that we can pull from, but in this case, we just got one and saw if it was possible [to get Selena] and it was.”

Jumping on board was “a no-brainer” for Gomez, who also mentioned that her favorite Martin and Short movie is Three Amigos.

The first three episodes of Only Murders in the Building drop Tuesday, Aug. 31 on Hulu. New episodes stream Tuesdays.