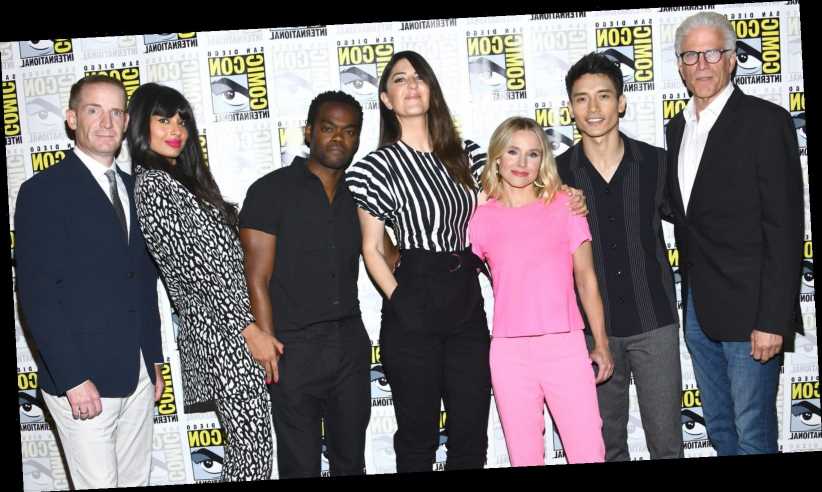 The Good Place, a fantasy comedy television series created by Michael Schur, is known for some hilarious and clever Easter eggs hidden throughout its four seasons on the air. Schur, who is also known for creating, writing, and producing some of the most popular television series, such as The Office, Parks and Recreation, and Brooklyn Nine-Nine (via IMDb), was responsible for many of the jokes and details hidden throughout The Good Place.

There are plenty of nods to Schur’s former projects, including a few fun details that any Parks and Rec fan would get a kick out of (via BuzzFeed). In Season One, we find out that beloved air-head, Jason Mendoza, dies because he suffocated to death after being locked inside a safe during a robbery gone wrong. The name on the safe is “Swanson Safe Company,” named after the character Ron Swanson from Parks and Rec (via BuzzFeed). Similarly, there are two shout-outs to other Parks and Rec characters, Jean-Ralphio and Dennis Feinstein, whose names subtly appear on magazine ads that the characters in The Good Place read (via BuzzFeed).

Another running tradition on Schur’s shows is to cast the real-life partners of the actors to appear in cameos. Kristen Bell, who plays the show’s protagonist Eleanor Shellstrop, has a scene with her real-life husband, Dax Shepard, who plays a creepy demon that hits on Bell’s character (via Insider).

Hidden props you never noticed on The Good Place

While many super fans know that all of the shrimp Eleanor eats on The Good Place is actually fake shrimp, due the actress being a vegetarian, there are many hilarious hidden props often missed throughout the series (via BuzzFeed). On The Good Place: The Podcast, Schur reveals that he often threw in numbers to make fans theorize over their meaning, even if they didn’t mean anything (via NBC). One example of this is that the neighborhood on The Good Place is officially known as “Neighborhood 12358W,” which is the beginning of the Fibonacci sequence, one of the most famous formulas in mathematics (via Insider).

Another detail you may have missed is that all of the essays and paper props on the show aren’t just props — they’re actually fully created by the design team! (via Insider). Manny Jacinto revealed that one of his favorite hidden jokes was a detail that you would only be able to see if you paused and zoomed in on your screen. During Chidi’s class, Jason (Jacinto’s character) is taking notes and on his notepad, which reads “the history of phil + sophie” instead of “history of philosophy.” This detail delighted fans because it was so true to Jason’s character (via Insider).

Kristen Bell is more relatable than you think. Like many of us, it can be hard not to fangirl in front of our favorite celebrities, and Bell is no exception. When she first met Ted Danson, who plays Michael on The Good Place, she admitted to checking into her hotel as Holly Frobishner, the character name of his wife (via Cheat Sheet). Bell is also a big gum chewer. In the Season Two bloopers, it’s revealed that Bell has a habit of filming her scenes with gum in her mouth. The bloopers show Danson pulling a piece of paper out of Bell’s mouth with her gum attached wondering how she was acting the entire time with gum (via YouTube). Bell replies, “I always have gum in my mouth” (via BuzzFeed).

It may also come as a surprise and delight to fans that Bell, much like her character Eleanor, is a huge fan of mailmen. In high school, she had a picture on her wall of a man in biker shorts that said “Priority Mail” on the top (via BuzzFeed). But hey, “Pobody’s Nerfect!”