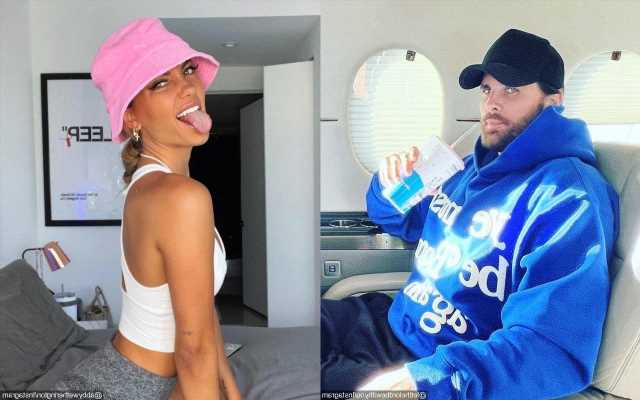 Since breaking up with Amelia Hamlin, the ‘Flip It Like Disick’ alum has been spotted out with a number of aspiring models but whether or not he’s been romantically linked to any is unconfirmed.

AceShowbiz –Scott Disick is seemingly still hunting for love. The “Flip It Like Disick” alum was spotted out and about with a stunning mystery woman amid rumors he’s in a relationship with Abby Wetherington.

The 39-year-old reality star was photographed leaving Nobu in Malibu with a brunette beauty on Tuesday night, August 16. In photos obtained by Daily Mail, the two were seen getting into his new gray Ferrari before driving off.

For the date night, Scott wore a gray windbreaker with green lining over a black T-shirt and a pair of camouflage pants. “The Kardashians” star also added a brown baseball cap as well as white sneakers. He also sported a bushy beard for the occasion.

As for his lady companion, she donned a plunging black dress that showed off her ample cleavage and long legs. To complete her chic look, she added a pair of strappy open-toe black heels, a dainty gold necklace, a matching watch and a black purse.

Scott has been spotted out with a number of aspiring models since breaking up with Amelia Hamlin as well as Kourtney Kardashian‘s wedding to Travis Barker. Last month, the Talentless founder sparked rumors that he’s dating Jake Paul‘s ex Abby as they’re spotted having fun during a party on a yacht.

At the time, Scott was caught hanging out with a bevy of bikini-clad ladies, including Abby, at a yacht party in Miami. In a photo from the festivities, he appeared to be handing the 24-year-old model, who wore a black swimsuit, a small plate with a candle on it.

Prior to that, Scott was seen dining with Kimberly Stewart twice. Although they appeared to be friendly during the fun times out, a source insisted that they’re just friends and revealed that Scott is quite close with the entire Stewart family, including Kimberly’s singer dad, Rod Stewart.

Less than a month prior, Scott reportedly called it quits with model Rebecca Donaldson after two months of dating. Of the breakup, a source said, “Although they had a short-lived romance, it was definitely serious. He enjoyed his time with her but realized he is not in a place to seriously date right now.”