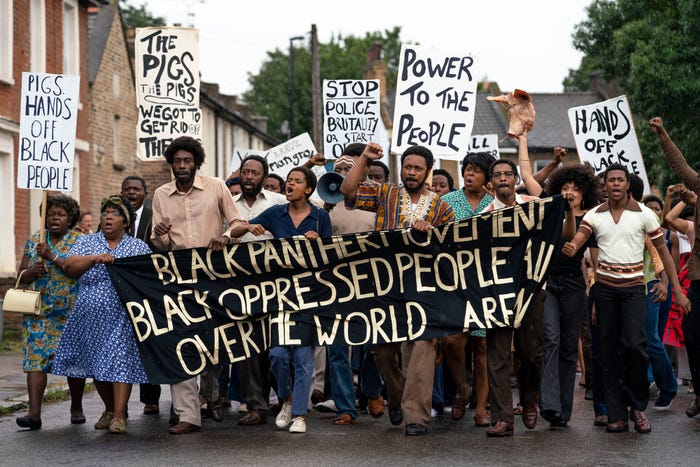 British artist and filmmaker Steve McQueen is back, and this time he's taking on a new medium.

After becoming the first Black director of an Academy Award-winning best picture, and winning the prestigious Turner Prize for visual art, the "12 Years a Slave" director has taken his talents to TV in the form of "Small Axe" a collection of five separate films that explore the lives of West Indian people living in London between the early 1960s to the late 1980s.

During a wide-ranging interview with Insider, McQueen said the idea for the "Small Axe" collection — a name borrowed from a 1973 single by the Wailers ("If you are the big tree, we are the small axe") — has been been on his mind for over a decade.

"It started about 11 years ago," he said, "but I wasn't ready to execute 11 years ago because I needed to mature. I needed to find my way through it. Sometimes that's just it: Time is the best thing to judge a particular period in one's life."

And over the course of those 11 years, McQueen has crafted five masterful films that burst with passion, precision and enshrine him as the greatest filmmaker working today.

Why you should care: The 'Small Axe' collection boasts an impressive cast

Steve McQueen has assembled a stellar cast across all five films, the most famous being Letitia Wright ("Black Panther") and John Boyega ("Star Wars").

Wright takes the lead in the first film "Mangrove," an epic courtroom drama based on the groundbreaking trial of nine Black activists known as the Mangrove Nine who were accused of inciting a riot during a protest against the police harassment of a popular Caribbean restaurant in Notting Hill.

And Boyega provides his best screen performance to date in the third film of the collection, "Red, White and Blue." The "Star Wars" favorite take on the role of Leroy Logan, a Black forensic scientist who joins London's Metropolitan police force in an attempt to fight systemic racism from within after his father becomes a victim of police brutality.

What's hot: The second film in the collection 'Lovers Rock'

While the rest of "Small Axe" recounts the institutional barriers West Indian people have faced in the UK — a racist police force, judicial, and educational system — "Lovers Rock," the second film in the anthology, is about straight Black joy.

The entire film takes place over the course of one evening at the blues — a private house party hosted by Black Londoners in the 1980s as a response to the racist entrance policies at the city's largely white nightclubs — where Martha, played by Amarah-Jae St. Aubyn in an inspired screen debut, meets the smooth-talking Franklyn (Micheal Ward) and we follow along as the night unfurls into a dreamy, sensual fairytale.

Halfway through the evening in what is perhaps the standout sequence of the anthology, if not the year, the house DJ, feeling the romance in the air, puts Janet Kay's 1979 reggae hit "Silly Games" on the speaker.

The partygoers instantly file into pairs: girl grabs boy; boy grabs girl, and McQueen's camera drifts through the cracks as the beautiful couples fixed up in their stylish suits and flowing evening gowns sway to the music's vibrations.

Running just over an hour, "Lovers Rocks" is a uniquely affecting gem that acts as a loving appreciation of the role music plays in our lives. This film is unlike anything audiences have ever experienced before.

The Bottom Line: 'Small Axe' is an epic triumph

There will be many people who will attempt to highlight Steve McQueen's directorial flair and visual style as the crowning jewel of these five films, but these reads are shallow. Steve McQueen is a filmmaker who is completely disinterested in formalism or style. His work is solely compelled by truth-telling and finding the most direct way to convey these truths.

As a result, the work doesn't filter through any fat or waste. The visual presentation bends to the needs of the story, and the narrative comes at you fast with unique clarity that can only exist in a filmmaker who has studied the power of moving images away from the pantomime of Hollywood.

And the truth McQueen sets out during "Small Axe" is that no matter how much it may have been hidden or obscured, the West Indian community plays a most vital role in the history of contemporary British culture.

"Small Axe" is an epic triumph and must watch for all.

Steve McQueen says people 'pulled out' of '12 Years a Slave' because they didn't think it would make money. It went on to make $187 million.

The 7 best movies to stream this week

11/19/2020 Celebrities Comments Off on REVIEW: Steve McQueen’s ‘Small Axe’ is an epic triumph that lingers with you for weeks after watching
Recent Posts
We and our partners use cookies on this site to improve our service, perform analytics, personalize advertising, measure advertising performance, and remember website preferences.Ok