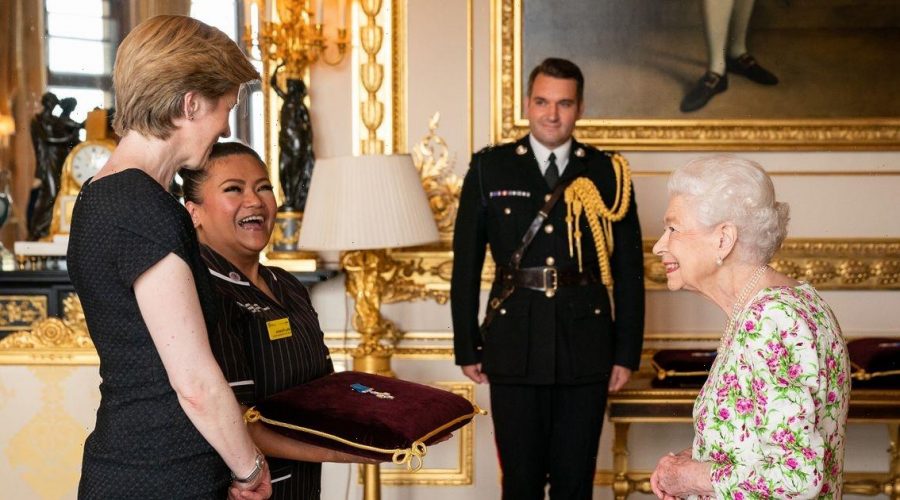 Her Majesty joined the Prince of Wales to present the George Cross to representatives of the National Health Service (NHS) from Scotland – where the monarch recently visited– England, Wales and Northern Ireland.

The George Cross was instituted by King George VI on 24th September 1940, during the height of the Blitz.

The event today recognised the NHS for its “courage, compassion and dedication” during the pandemic and throughout the 70-plus years since its foundation.

They were joined by a frontline worker from each of the home nations, including May Parsons, the nurse who delivered the world’s first Covid-19 vaccine outside clinical trials to Maggie Keenan on December 8 2020.

The Queen looked lovely in a cream dress with a pink and green floral pattern and appeared in high spirits, smiling during the engagement which took place in the white drawing room of Windsor Castle.

Speaking ahead of the presentation, the 96 year old monarch said it was a “great pleasure” to hand it to the NHS.

"It is with great pleasure, on behalf of a grateful nation, that I award the George Cross to the National Health Services of the United Kingdom,” the Queen said.

“This award recognises all NHS staff, past and present, across all disciplines and all four nations.

“Over more than seven decades, and especially in recent times, you have supported the people of our country with courage, compassion and dedication, demonstrating the highest standards of public service.

“You have our enduring thanks and heartfelt appreciation.” Today marks the third time in its history that the George Cross has been awarded to a collective body.

Today's engagement at Windsor comes after the Queen recently had her duties scaled back after Buckingham Palace formally rewrote her role.

The move marks the first time Her Majesty's role has been altered significantly in nearly a decade.

One job that the Queen will no longer undertake is the State Opening of Parliament, which was previously considered a "constitutional convention".

The last time this was held, the Queen was represented by her eldest son, Prince Charles, who is first-in-line to the throne.

The Prince of Wales read a speech as the monarch missed the event for the first time in nearly 60 years.

The Queen has missed a number of events of late, citing “mobility issues” and responsibilities have frequently been taken on senior members of the royal family, including Prince Charles, Camilla, Prince William and Kate Middleton.

Previously, the Queen's duties as Head of State were detailed in a 13-point list, which included the appointment of the prime minister, and paying and receiving state visits.