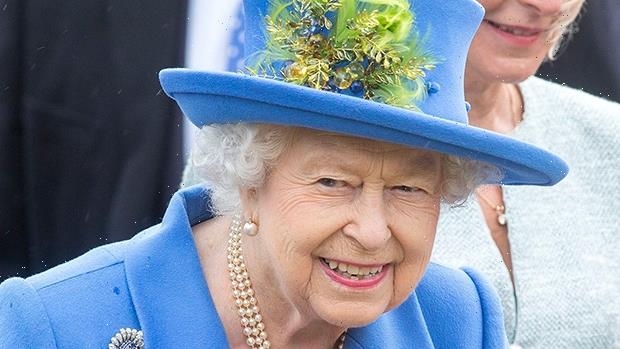 Queen Elizabeth II met with two new ambassadors to the United Kingdom for her first day back to royal duties following two weeks of mourning her beloved husband of 73 years, Prince Philip.

Queen Elizabeth II looked so pleased to return to her work after her two-week mourning period, following the death of her husband, Prince Philip, on April 9. The British monarch, 95, was captured in a photograph that was tweeted out by the Royal Family on Tuesday, April 27. In the photo, which featured the queen meeting with two new ambassadors to the United Kingdom via video, Queen Elizabeth smiled and wore a beautiful, floral ensemble in hues of blue. You can see the photo below.

“Today The Queen held Audiences with incoming Ambassadors via video link from Windsor Castle to Buckingham Palace,” the caption to the photos began. The queen met with Her Excellency Mrs. Ivita Burmistre, Ambassador from the Republic of Latvia and Her Excellency Mrs. Sara Affoue Amani, Ambassador from the Republic of Côte d’Ivoire. The audience with the two ambassadors marked the queen’s first engagement since Prince Philip’s funeral on April 17.

Nearly the entire Royal family gathered for Prince Philip’s funeral, which was held at St. George’s Chapel in Windsor Castle. The somber moment for the family also provided an opportunity for Prince Harry to reunite with his older brother Prince William. The brothers’ relationship has been strained for months, and the Duke of Sussex, 36, openly discussed his bond with his older brother, 38, during his and wife Meghan Markle‘s joint interview with Oprah Winfrey in March.

It wasn’t until after the funeral, on the occasion of her 95th birthday on April 21, that the queen shared her appreciation to those offering their condolences after her husband of 73 years passed away at the age of 99. “I have, on the occasion of my 95th birthday today, received many messages of good wishes, which I very much appreciate,” she began her statement. “While as a family we are in a period of great sadness, it has been a comfort to us all to see and to hear the tributes paid to my husband, from those within the United Kingdom, the Commonwealth and around the world.”

Queen Elizabeth went on to extend her gratitude “for the support and kindness shown to us in recent days. We have been deeply touched, and continue to be reminded that Philip had such an extraordinary impact on countless people throughout his life.”