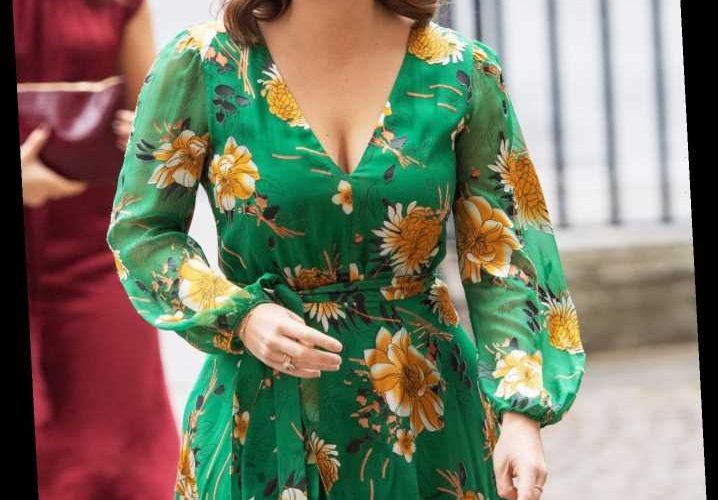 Princess Eugenie is proud of her scoliosis scar — and anyone else who’s been diagnosed with the condition.

Dancer Poppy Gerrard, 18, of Liverpool, revealed how the princess, 30, invited her MerseyGirls dance troop to a special private afternoon tea after seeing her dance partner, Julia Carlile, appear on the 2017 series of Britain’s Got Talent.

Like Eugenie, 18-year-old Carlile was born with scoliosis and, together with the rest of the MerseyGirls, used the hit U.K. talent show to both showcase their performance skills and raise awareness of the condition, which causes severe curvature of the spine.

"I will never forget that day," Poppy told the Daily Mail, Monday. "It was just like we were talking to a friend.

"She told us about her scoliosis journey and what she had been through with her operations," she added.

"At one point she unzipped her dress and showed us her scar. It gave me goosebumps that a princess was so proud of her imperfections and that she was prepared to share something like that with us."

The surprises didn’t stop there either. Eugenie remained in touch with the MerseyGirls after the meeting and later invited Poppy, Julia and the rest of their dance mates to her 2018 wedding to Jack Brooksbank.

It was during this that Eugenie, who is expecting her first baby in early 2021, publically showed off her scar, which runs all the way down her back, by wearing a low-backed wedding dress by British-based label Peter Pilotto. "I had always wanted a low back – part of it was showing my scar and I believe scars tell a story about your past and your future, and it’s a way of getting rid of a taboo,” Eugenie told PEOPLE in 2019. “For me, it’s a way of communicating with people who are going through either similar situations with scoliosis or having a scar of their own that they are trying to deal with.”

This positive attitude wasn't lost on Poppy, who cites Eugenie as giving her the self-belief to secure a place at Manchester University and to enter the 2021 Miss England beauty pageant in a bid to show young women that anything's possible.

"It was just a dream come true because there's a little girl you dream of tea parties, palaces, and princesses,” Poppy told the Daily Mail about her surprise royal encounters.

"She was so inspiring and down to earth and friendly," she added. "It was just nice to see that the royals are just normal people, and they are that genuine, kind, and real.”

Poppy isn't the only dancer from the MerseyGirls to have benefited from their appearance on Britain's Got Talent. Moments after their performance in the 2017 final — where they came in ninth — Simon Cowell walked up to then 15-year-old Julia and offered to pay the $200,000 bill for her surgery.

In July 2019, she traveled to New Brunswick, New Jersey, to undergo a vertebral body tethering operation that helped address her scoliosis.

Eugenie herself also underwent surgery on her spine at the age of 12 where she underwent an eight-hour operation that involved surgeons inserting eight-inch titanium rods into each side of her spine and one-and-a-half inch screws at the top of her neck.

Afterward, she was in intensive care at the Royal National Orthopedic Hospital for three days.

She has since used this experience to inspire others. In 2012, the royal became a patron at the hospital, and lent her name to a dedicated scoliosis facility, alongside a residential space for parents and children going through treatment.

In October 2020, Eugenie also became the Patron of the Scoliosis Association UK, which was founded in 1981 to provide support and information to those affected by scoliosis.

01/04/2021 Celebrities Comments Off on Princess Eugenie Inspires Teen Dancer by Unzipping Her Dress to Reveal Scoliosis Scar
Recent Posts
We and our partners use cookies on this site to improve our service, perform analytics, personalize advertising, measure advertising performance, and remember website preferences.Ok